Here's an unusual S/C set marketed in the early 70s by Roland Scott under the 'RS' label though its possibly of 'Mainstream' origin. Its a sturdy steel-cased design with identical-looking rockers for the power switch and button. The button rocker is of course momentary. When I first got this set it had the original white rockers but they were tatty and unreliable, the only direct replacements I could find were black. If ever I find some white ones they're easy to swap.

As with the other NRF projects here it doesnt use a conventional R/C module and R/C receiver, but instead uses the FHSS code on an NRF24L01 module. This means the total cost including a receiver is under £15.
It works to any of the homebrew receivers based on the RF-Nano, or Promini with NRF24L01, etc.

Like the OS Pixie NRF conversion, it has single-channel compound emulation giving rudder, kick-up elevator and quick-blip throttle at either of two selectable compound keying speeds corresponding to 'light' and 'heavy' rattlers (similar difference to the Elmic Commander vs Elmic Conquest), also does sequential escapement emulation, has an inactivity alarm, servo reversing, Vtail & Elevon mixers, minute-minder, travel adjust (rates) with 'minimum' set for torque-rods - rudder & elevator throws are governed either by a pot on A7, or a link which gives a fixed 50% for torque-rods. It has the 'button follower' channel for driving a genuine escapement via a channel switch. The quick-blip throttle is a cyclic 4-position 'off-half-full-half' just like the PIC S/C encoder. Power is an EBL lithium PP3 which is actually a 2S 8.4v battery.
The rapidly flashing LED on the receiver is the packet traffic indicator, each on-off cycle represents 20 packets received. Each packet carries the equivalent of a full R/C 'frame' for the four channels (rudder/elevator/throttle/escapement) at 200 frames per second.

The Navigator takes my count to eight NRF transmitters plus one loose redboard/NRF that I experiment with...
Left to right - cardboard test set, OS Cougar, RS Navigator, OS Pixie, Micro, MPX Pico, and behind are the two unbranded car radios. Most have flown, no problems at all.
Franks NRFs include his OS Pixie, Robbe, his Car radio and his FT5D S/C set, plus Tobes GG NRF's and Shauns Space Commander makes at least fourteen that we know of

And here's 2 other versions of essentially the same tx by Mainstream. 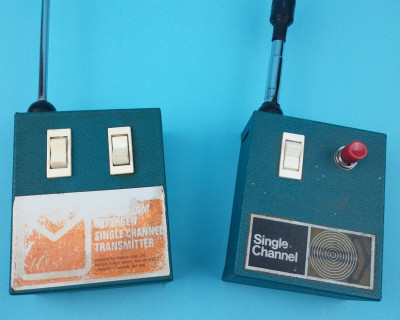