Look what crossed the Channel.

Look what crossed the Channel.

Thanks to Shaun G. a little parcel was delivered today containing four Elmic escapements. Shaun was generously letting go of his spare ones so I could use them in one of my single channel projects. I was becoming addicted to these stone age radio gems after installing a Typhoon sequential escapement in my Graupner Kadett which by the way has flown successfully in the last months.

Next step is trying a compound escapement which has almost the same functionality as was present in my first radio model in the sixties. It was a Veron Robot and the radio was a Futaba FT 5s rig with two servos. Push and hold the button on the transmitter and the rudder servo went to an end position, two pushes and hold and the rudder went to the other end position and a quick blip of the button cycled the throttle servo.

So the question now is: should I put the newly acquired escapements in my most recent model, a Evert (Windy) Kreulen Impuls,or in a KeilKraft Southerner (just started building) or should I rebuild the Veron Robot. I still have the plans that came with the kit. Should be fun to know somewhat more of the design and its designer. I suppose a few of you on this forum can tell me more of the history of this design. So please don't hold back! 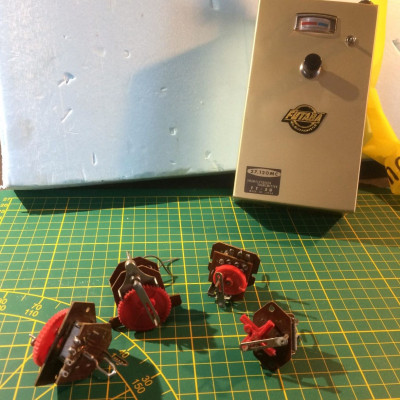 Re: Look what crossed the Channel.

Glad they've finally arrived. The compact is the best escapement of the bunch and one of the commanders, the other one is only suitable for spares .Throttle esc should also be ok but check them all out first .

Remember they used to stick on and skip with frightening regularity. Use a cheap model to test them in

Re: Look what crossed the Channel.

I thought I'd posted a piece about improvements to the Elmic Compact here, but it must have been on the "old" forum!

I've re-posted the details here. If you are intending to use a Compact in anger, I recommend carrying out these simple modifications!