There is a guy from Belgium selling a 1971 "G45 Space Commander" tranny. Does not mean anything to me, but who knows, it might be highly collectable:
https://www.modelbouwforum.nl/threads/v ... er.268686/
Top

I had one of these in about 1978. It was green as were the servos and receiver. Bought it used for a good price. Worked well until a wire broke and it flew away. Wonder of wonders someone found the plane and brought it back to the flying field and it was sitting there next to my toolbox when we gave up looking for it and returned to pack up. Never trusted it again....,
Top

) was importing them into Oz for a while, as I recall from about '75. They were all green versions, although I do remember seeing a red version which apparently had been imported directly from the Orient. Australia was still flying R/C on 27Mhz then, like the rest of the world, so such 'imports' were simple.
Cheers,

Hah, Port Macquarie (assuming it is the same place), one of the few places I have ever been to in Australia. I was there while holidaying from NZ where I was living at the time (1985). Happy times....
As a coincidence it featured in Michael Portillo's "Great Australian Railway Journeys", yesterday on the telly

Never seen the green versions only the red ones in the UK.

....you mean that's missing in your collection?
Quite disappointing....
Top 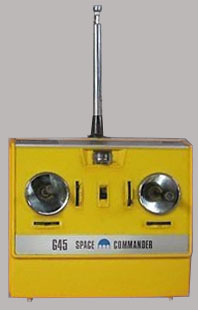