Some weeks back I asked if by chance anyone had copied the "Micro-2 challenge" project as it had been irrecoverably lost when the 'singlechannellersreunited' forum shut down: 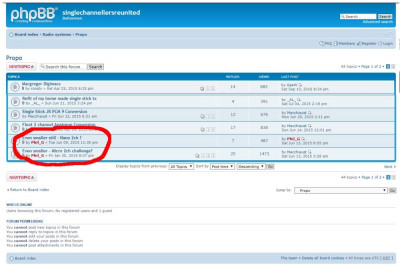 It was a fun, interactive thread about a self-set challenge to make a tiny set through one evening, using only scrap bits and posting as it developed. People chimed in with encouragement and jibes in equal measure as the update progressed, some were hilarious

Though we've lost that interaction, it was a great fun at the time, and I was sorry to have lost it. I've been looking on and off, and finally found a build summary, its a bit dated now (well over 4 years ago) but here it is if only for my own reference:

Dont take this at all seriously, its just a bit of fun, its a micro 2ch propo transmitter made as a challenge, an evenings entertainment using only what I had to hand.

The bits I had were a V8HT Frsky RF module, a little plastic case from a Maglite Solitaire torch, a PP3 2S life battery, a PlayStation-style propo joystick with left-right, up-down & press (which I'll use for trim), and an iPC07 PIC processor board (same hardware as the Tiny-6 reeds emulation encoder). The Kraft is just for size reference: 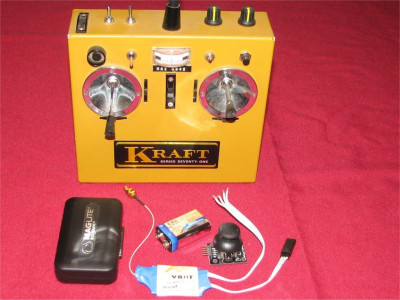 I found the playstation joystick gimbals are strange in that they cover the whole 5v, ie the movement uses the whole pot, not just a quarter of it as usual.
The software is in PIC assembler, just a very simple 2ch, no 'features' other than servo reversing which is set by holding the stick over on power-up, and is saved to flash. I've avoided the need for a schottky by programming the PPM output to emulate an open-drain feed, by outputting a low for a 0, and switching to input for a 1. This allows the Frsky's internal pullup to 3.3v to provide the logic 1 on the PPM line with no fear of overdriving it to 5 volts. 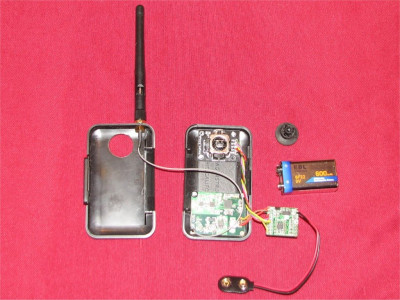 The 2ch encoder is hardware based on an iBoard IPC07 which is just a surface-mount PIC12F675 with an LDO voltage regulator and decoupling, and an ICSP connector. Everything is permanently wired, theres no room for connectors. 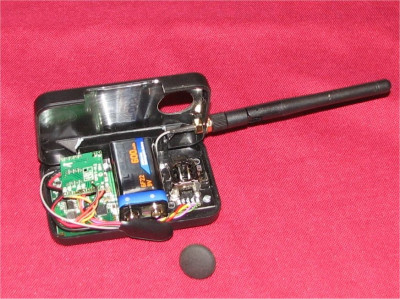 I've completely removed the bind board so theres no button and no LEDs. To get bind mode, I stick the two ends of a low value resistor between the end holes, switch on then remove it. I cant imagine having to bind this little novelty set that often, its just a bit of fun - although its obviously a full range tranny with the Frsky V8 module.

It is tiny, and only just went together. I even had to remove the catch that holds the case closed - some black tape will suffice, no-one will know!

Heres my very conventionally-sized Kraft alongside for comparison: 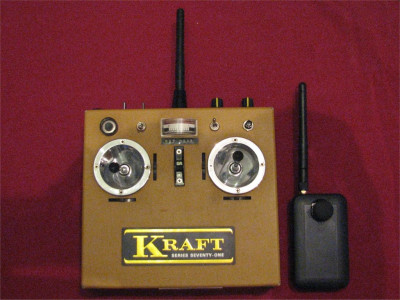 Heres the completed set (obviously nothing is ever truly completed...)

Later I added a plus-one style throttle using the push-switch of the Playstation gimbal:


Heres the PlayStation gimbal, cheap as chips: https://www.ebay.co.uk/itm/2PCS-Dual-ax ... 2208598387.
I removed the connector of course.
I've not looked to see if you could disable the centring for throttle function.
I noticed that the stick has a bit of a dead-band at neutral, and its difficult to be precise with such a short 'stick', but its only a novelty and I'm happy that a one-evening project, start-to-finish, actually works

Its ideal for the little Multiplex Fox R/C chuckie - all packs neatly into a small box: 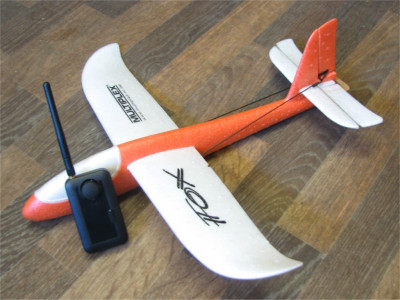