Hi
I forgot to enter my wobbly winged Invader earlier last year, so here it is now. Mechanism is nicked off Ron as are the wing tubes and joiner.. thanks Ron. It’s not quite finished in the photo but it is now and it is a terrific flyer. All moving wings have a different feel to them when flying but are not in the least twitchy and in this case easier to build than twin rudders and a dihedral elevator
Hope you like it!

Sorted Glyn! I really like the 'wingeron' idea as theres nothing at all at the rear - no rudder, no elevator, no hinges, no pushrods = no weight

I've only used it on the Lidl Glider but it really is an eye-opener, very positive control and so easy to do.
On a separate note I need to tap you about the Wasserkuppe Glyn, who to talk to, rules & regs, arrangements & such... I'm planning a campervan trip this year!
Cheers
Phil
Top

Lucky you hope you do it!
There were no rules as such, just see the guy supervising the model flying, usually at the top of the slope and pay your 5 euro and that’s it. I think he asked for my BMFA insurance but I can’t remember exactly. I think there’s a website for more info.
Check the Museum out too... fantastic!
Germany seems to like model flyers...

Thanks for uprighting the Invader.
Top

I have just started building an Invader with the intention of converting it to the wobbly wing method of radio control. Then I had a thought

could you not use V tail mixing or other mixing like a Zagi for this model. I feel and experiment coming on.

I don't think that V tail mixing would be successful unless you changed the standard angle significantly. V tails need to be much narrower than the Invader tailplane to give any sort of rudder authority..... I believe that the 'sweet' angle is around the 100 - 110 degrees mark.
Top

The Colonel is absolutely right; I have had a good few "V" tail rudder/elevator (i.e. "ruddervator") models and the dihedral on the Invader's tailplane is far too shallow to produce a satisfactory turning response as a rudder function and any attempt to use "tailerons" (i.e. deflecting like ailerons) is I fear doomed to failure on a model like this.

100 to 120 degrees included angle is where you need to be for ruddervator control - examples below. Unless the model is sized up like the Colonel's latest to make rear mounted servos practical, or you are prepared to tackle some pretty tricky linkages, the "wobbly wing" is probably the best option for the Invader. 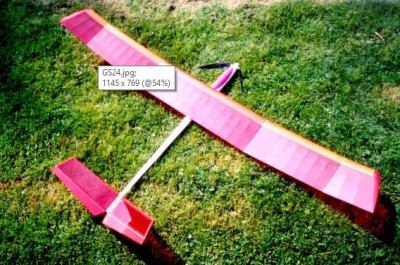 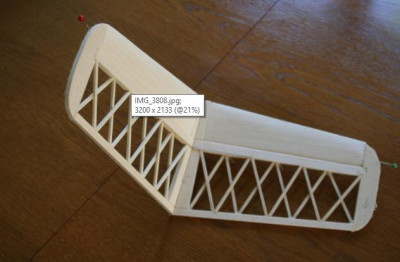 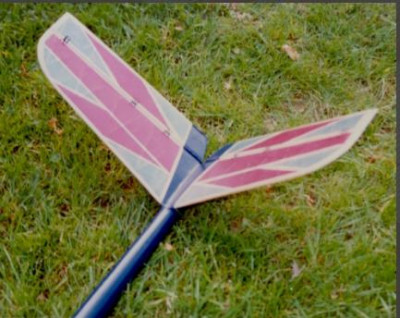 It's still a terrible thing to do to a Vintage design! [Opinion of poster]
Top

It's still a terrible thing to do to a Vintage design! [Opinion of poster]

Oh now, come on Colonel, putting radio in it in the first place is pretty terrible if you are a purist. Being practical, if vintage designs were only built and flown as originally intended, in the present day we would see very few vintage models and even less vintage flying. Changes to make them practical everyday flying machines have never worried me, a model with necessary changes that I can take out and fly regularly beats a plan mouldering away in a drawer every day. And as it happens, the wobbly wing set up on the Invader produces a model with an appearance much closer to the F/F original than fitting moveable control surfaces to the tail does. Although I would prefer them not to be covered in plastic film - unless it has tissue on top of it!

To put it in context, one needs to ask "What would the designer have thought?" No way of proving it but I am reasonably confident that viewing Ron's or John Woodfield's wobbly wing equipped original size Invaders soaring along the ridge under perfect control Albert E Hatfull would have been both amazed and delighted - as indeed he would also have been on seeing your spectacular double size four motor interpretation (best wishes for the test flights BTW).

Declaring my interest, the Invader is one of a limited number of models which has very special resonance for me, along with Dean's KK Bandit, Smeed's Paageboy, Fuller's Dixielander and Foss's Hi-Phase in that it was my very first successful FLYING model, built at the age of 6 in 1947. I keep threatening to build another one, but if I do it will be hauled aloft by a little electric motor and have wobbly wing control - 'cos I can no longer run or climb trees (or indeed hills) and want models I can take out and FLY!
Top

It's catching on abroad as well.