Had a nice flying session today with a couple of mates at our local coastal slope site.
Introduced Daz to Reeds for the first time & he took to it like a duck to water. 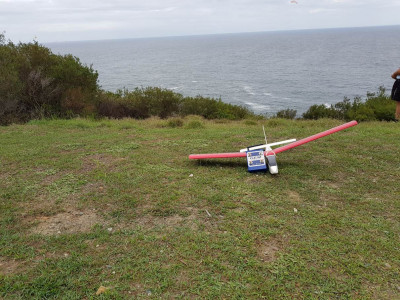 Very nice. Just need to get off my butt to build a 75% Wizard of Oz that I promised myself a few years back!
Gordon
Top

Heres an Impala landing Carl, from around 2 minutes 30 I'm setting it up by overdoing the turns at each beat, so gradually the model drifts back without actually turning downwind. The final 'away' beat is taken a bit further to lose some more height, then back towards the spot, where the final turn directly into wind effectively stops the model dead at a few feet high. From there you can safely push it down into the heather - a few feet isnt enough for it to get any speed on so the touchdown groundspeed is very slow.

Heres another method, here we go further out at or slightly below eye level, then do 3/4 of a wide 360 which is judged to drift just enough that the last bit brings you back into wind just behind you. The last 1/4 of the 360 is done much tighter which again stops the model in its tracks, from there you drop it in on elevator.
Start from 3:15, the wide angle lens makes the landing look a bit distant, its actually about 25 feet away.

Either method also works for single-channel rudder-only but if possible you take the model further back into the sink, the same principle of using the drag of the last turn to slow it down... I find S/C on-slope landings are best done with the 360 method, taking the model well out and as low as you are confident it will regain during the 360, wait till it almost impacts the slope, hold rudder for the final into wind turn and if you're lucky it will drop in, if not just repeat but from further out and a bit lower. S/C slope landings can take maybe 10 attempts or more, but whats the rush?

Heres a sort of slope landing video of my KK Invader

If you would like to contribute a small amount toward the upkeep of this valuable forum then please click the Donations link at the top of the page, just below the mode zero logo. All donations are kept anonymous. Thankyou
Top

Very nice Ron and Phil. I've often wondered if the spoil heaps near Xscape would be suitable for soaring. Seems they are!
Now how about an indoor slope soaring facility like the Xscape indoor ski slope. I see astro turf, perfect inclines and big fans for the wind controlled by the flyer from his TX. Probably wouldn't take much on the door I suppose!

glyn wrote: ↑
13 May 2020, 14:25
Now how about an indoor slope soaring facility like the Xscape indoor ski slope. I see astro turf, perfect inclines and big fans for the wind controlled by the flyer from his TX. Probably wouldn't take much on the door I suppose!

Glyn, I think the lockdown is getting to you!

glyn wrote: ↑
13 May 2020, 14:25
Now how about an indoor slope soaring facility like the Xscape indoor ski slope. I see astro turf, perfect inclines and big fans for the wind controlled by the flyer from his TX.

That would be three short blips and hold for North, I suppose...?