Looks good.
Good luck with the next attempt.

Yep, that's fixed it, flies great now. Well over powered of course but it is perfect on 50% throttle. On full throttle it is still controllable but climbs like an FAI power job! On the propo Tx this evening, I'll try the single channel one next outing
Top

I actually had another couple of sessions with the propo Tx, it is very easy with this, fly at half throttle and to land just gently reduce power until it is about to hit the ground and a quick blip of throttle flairs it nicely. However, the power off glide is pretty non-existent, something like a 45 degree descent! This was clearly going to make life difficult with the single button Tx. Anyway, I finally bit the bullet last week and went for it. With mid throttle set at 50%, and making sure that the next quick blip was "off" rather than "full" it was quite OK, the landing technique being to fly round in tight turns to get it down to a couple of feet and then cut the power whereupon it drops in. I think Imay try re-trimming it to get some semblance of a glide - it is never going to be a thermal soarer but at the moment it is like the trim that the guy used to win single channel at the Nats one year he called it "no glide" and achieved spot landings by cutting the motor when the model was over the spot and crashing it thereon!
Top

Just to wrap up on the Metro Gnome; I have flown this quite a lot over the last few months, as being so small and handy I throw it in the car with whatever other models I am taking on each outing. I have to admit that most of the flying has been with the propo Tx, on the flights with the single button Tx, you have to work fairly hard to get the landing right; having proper control of the throttle makes it so much easier to do smooth controlled landings. To the extent that last weekend I managed to amuse my French friends (who still think that flying without an elevator equates to black magic!) by landing it on the seat of my plastic garden chair which I had fortunately just vacated! The prop and motor passed through the back slats to produce a perfect arrested aircraft carrier "barrier" type arrival with no damage at all! I managed to keep my face straight enough for them to believe it was intentional!

I suppose I should re-trim it to get a better glide so flying with the three position throttle would be easier, but to be honest it is so much fun as it is that I am loath to mess with it.

Anyway, if wanting a quick, simple "chuck abart" RE model, I can thoroughly recommend it albeit not with the original incidence and downthrust settings, and due to the low weight it is virtually crash proof.
Top

Ripper !
I don't think I have ever had my eyes water both from laughing and perceived pain at the same time.
Spike S
(Tune for maximum smoke)
Top

See what you mean Paul - love the video in the link. But funnily enough the exact scenario which the guy is describing in the poem happened to a school mate of mine when, after a shower, he sat on the slatted bench in the changing room to dry his feet. He certainly got a shock when he tried to stand up and required "assistance" from below to thread the trapped anatomical portion back trough the slats - as the poet say, it is at times like this when you find out who your friends are! Fortunately our chairs at Vayres are quite sturdy and don't suffer from this type of deformation, but with my dodgy knees and back I fly most of my vintage models from the seated position these days and find them invaluable especially for long thermal flights like the one I was engaged in in the photo - but I cannot fly fast aerobatic models while sitting down. 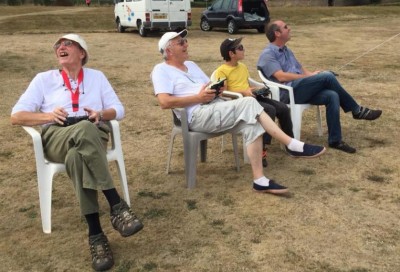