In my quest for a quick (?) model to test my Mule dual frequency Tx with, I retrieved my old Veron Deacon from storage. The more I examined it, the more "minor fixes" I decided to do while I was setting it up for the Mule Tx on 36Mhz - all to make the Deacon 'even better' (there's no helping some people!?!).

Here are some pics of my progress thus far:

Original OS S/C radio installation. The Deacon flew with this R/C and diesel
for over 20 years. 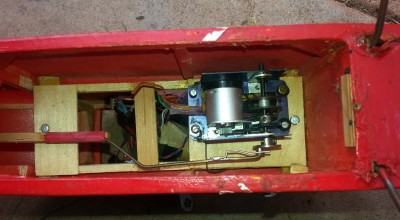 before cleaning up and starting the "revitalisation"

The original very tired Aussie Taipan 1.5cc diesel has been removed and replaced with a Graupner S400 motor+gearbox with Rhondo brushed ESC soldered to the back of the motor. 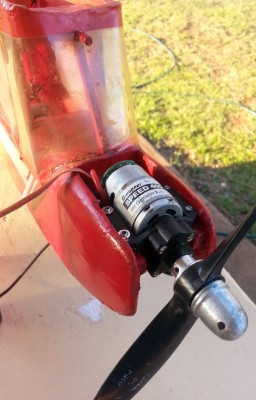 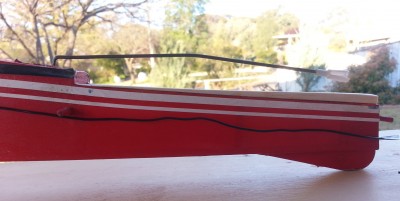 increased tailplane packing to go with the CofG moved forward.

The new radio installation with the original beside for comparison. The trays are interchangeable and are mounted from the bottom of the model i.e. the radio tray is upside down. 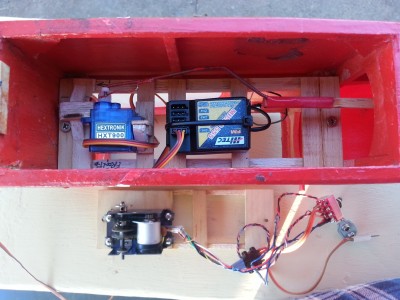 
and no, it hasn't been a quick test bed conversion!?!

The video is pretty crappy, so here are screen grabs from the best bits

The S400 on 3 cells with a 10x5 prop provided about the same performance as the original clapped out 1.5cc diesel.The 'rudder' always has been a glorified trim tab

so it is to be enlarged. While I'm adding a more powerful motor, I think I'll stretch the nose an inch or so - then the battery can come further forward and the current nose weight can be reduced or hopefully removed. 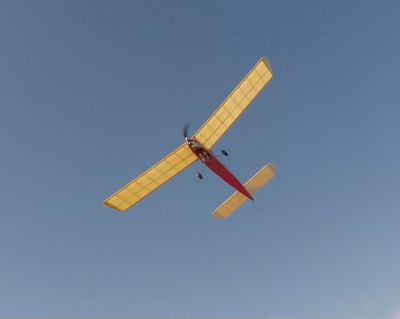 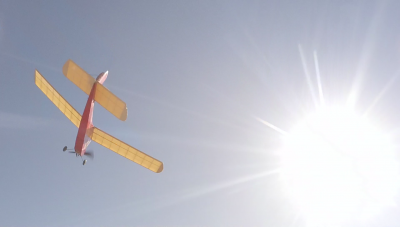 Still, it is flying again and the new Mule II.4 Tx worked a treat on 36 Mhz

I also flew the Pageboy using the Mule on 2.4Ghz & again, no problems 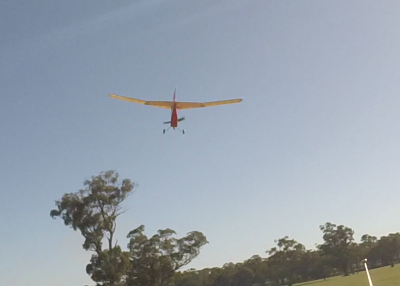 I'll make the mods and report back
Cheers,

Terrific Wayne, 'yet another attack of nostalgia! This is another model on my "To Build" list. I built one back in the day, powered by an ED Hornet........ I remember it was Blue and Yellow but I have no recollection of it flying. Hmmm........ I wonder why?

If you're thinking of making a new rudder, FWIW, a couple of pics of my installation in another model....... I mounted the servo to drive a torque-rod and use the old s/c type linkage for controlling the rudder. It is very simple to do, "looks the part" from the outside and means that you can remove the tailplane easily without having to disconnect anything..... 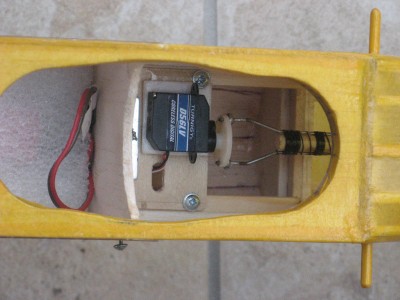 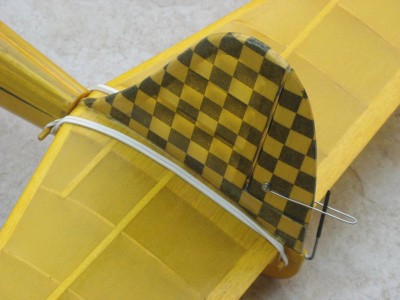 Looks nice in the sky
Carl

Thanks for the positive feedback guys

All the mods are now completed, but of course the weather has been conspiring against me to delay the test flights - it's been successive days of 30+ C with hot dry winds and fire bans up until recently, then it was passing rain & the occasional storm - go figure! However, I seized the day yesterday and had 3 very rewarding flights in the late afternoon after the breeze had dropped....... you little rippa!!

) - driving a 10x4.7 e- prop on a 3s 1350mah pack, it has considerable boogie, significantly more than what the Deacon has ever flown with previously

PaulJ wrote: ↑
01 Oct 2018, 08:55
If you're thinking of making a new rudder, FWIW, ....... I mounted the servo to drive a torque-rod and use the old s/c type linkage for controlling the rudder. It is very simple to do, "looks the part" from the outside and means that you can remove the tailplane easily without having to disconnect anything.....

Very similar to Paul's suggestion, I replaced the original push rod which was mandated by the OS servo output configuration, with a torque rod driven by a 9g servo. Rather than the yoke style connection to the servo that Paul used, I used a setup I'd used previously with a brass tube mounted inside a rubber tube which is in turn attached to the servo output arm - the torque rod has a wire end bent at 90 degrees that slides into the brass tube, the torque rod's rotational axis aligning with the axis of the servo's output shaft. Since the wire can slide in the brass tube, any small mis-alignments are automatically accommodated. I'm confident I can couple this arrangement to the OS servo output disc, such that I can go back to using the original OS Minitron radio installation if I wish. 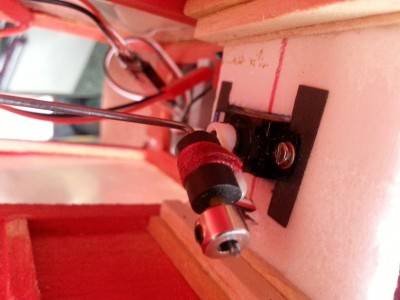 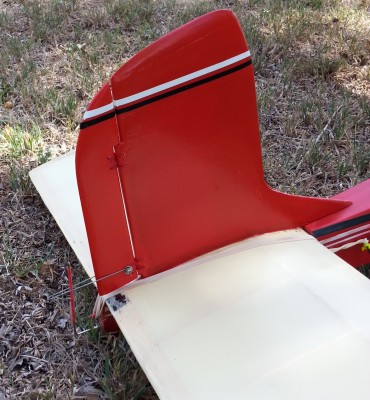 Rudder & Fin:
I stretched the fine vertically about 28mm and increased the rudder size by almost twice. The control horn has been replaced by the "traditional" S/C yoke to complete the illusion of using an escapement. 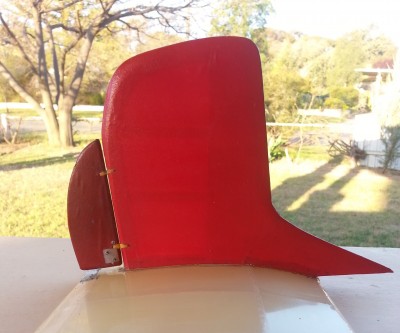 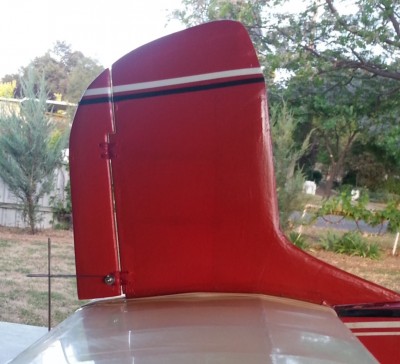 Radio installation:
To eliminate the lead from the nose, I moved all the RC components as far forward as possible. The ZTW motor has a built in ESC, the motor battery now fits immediately behind and under the motor, the Rx is in the front of the "cockpit" and the rudder servo is hard up against the forward fuselage former. Since the ESC doesn't have a BEC, I made a small in-line adapter to supply a UBEC directly from the motor battery. Alternatively, I could have hooked the UBEC to the balance lead.

With the slightly enlarged fin, the nose looked really short

so it was lengthened about 35mm, which also allowed more room for the motor battery. Fuel soakage was a problem with the engine bearers, so they were shortened back to sound material. A ply plate was then added to replace the removed bearers & join onto the remaining shortened bearers. 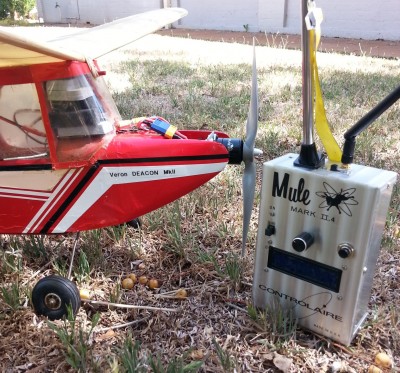 Like a new (old) actress, it's had both nose & butt work done

Tailplane:
As previously mentioned, I packed the tailplane TE up about 4mm.

Centre of Gravity:
The CofG is now 25mm forward of that shown on the original plan (which was on the rear spar).

I'm pleased to declare (at last) another successful S/C conversion 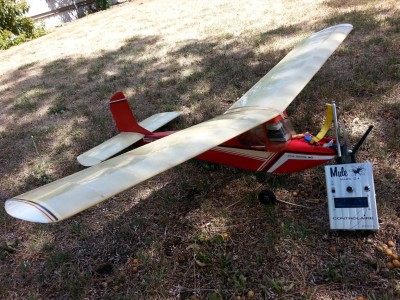 Well done Wayne for giving your old Deacon a new lease of life.
I have just started building a Deacon from the original Veron Plan and am planning on using a 1.5cc Allbon diesel up front. Some time back I built Martins single channel transmitter design which will be used for control of rudder only. I was considering adding an elevator but looking at the video of yours flying it would seem unnecessary.
Thanks for this post as it has inspired me to get on and complete my Deacon.

Sunbird wrote: ↑
30 Nov 2018, 18:15
Well done Wayne for giving your old Deacon a new lease of life.
............. I was considering adding an elevator but looking at the video of yours flying it would seem unnecessary.
Thanks for this post as it has inspired me to get on and complete my Deacon.

The Deacon is, I believe, a great sports/nostalgia F/F aeroplane

- I recommend them to you. It's now a very pleasant and easy to fly S/C machine. No, I don't think you need an elevator

The fin shape has been bugging me a bit & It finally occurred to me what it is - I kept all the same angles and only increased the height of the fin & rudder. But, when I raised the tailplane TE it had the knock-on effect of making the fin LE vertical rather than the subtle sweep back that we are all used to seeing, thus noticeably changing the look

Consequently I suggest you lay the fin back a few extra degrees to offset the increase in tailplane incidence.

Enjoy your Deacon, & let's see some pictures of its progress