Following on from my earlier post on re-purposing several old F/F models (viewtopic.php?f=53&t=432) & as I did for the Senator, I've started this thread to report progress of my conversion of the Tomboy (Tutor). The Tomboy has already been dealt with extensively, being a great FF model and justifiably popular S/C conversion, however usually its been built from scratch as a S/C model. Mine was flown F/F for many years, as well as being (at the moment) of mixed parentage with a Frog Tutor wing & Tomboy other bits .... a TomTutor perhaps (sounds a bit 'sus' to me

First thing to do was to remove the (non genuine) Mills 0.75 and clean years of gunk out of the engine bay. I then cleaned the rest of the fuse as best I could with Barkeeper's Friend. The fuse is covered in yellow solarspan(?) which appears to have received (maybe) a few coats of dope or possibly a clear lacquer spray. After cleaning I re-shrank the covering and then applied 2 coats of clear satin finish acrylic lacquer. The sponge rubber on the wheels was literally crumbling away so new light weight wheels have been fitted.

A new tailplane has been built. Initially covered in laminating film, it was then covered with coloured tissue applied over the film.

Previously when I used this double covering process I applied the tissue straight onto the film with dope. Since I didn't have any dope, and the nearest likely supplier is 1+ hours drive, I tried an alternative method which seems to have worked pretty well. The coloured tissue (from Office Works - thanks Gary

) was cut slightly oversized then laid out dry on a length of paper towel. It was then sprayed liberally with 65/35 water/pva (I used Bondcrete water based acrylic - just because I had it!) and left on the paper towel for the tissue to draw in the water based mix. When the tissue has soaked in the mixture I then sprayed the same mixture lightly onto the film covering, then used my finger to rub/spread it over the entire area to be covered as evenly as possible. I then lowered the tailplane onto the still wet tissue, then carefully rolled and lifted the tailplane so the tissue was on the top surface. I detroyed the first strips of wet tissue when I tried lifting then taking them to the tailplane - they just folded onto themselves & no amount of effort or verbal encouragement

would prize them apart

Then using my finger I carefully pulled/pushed the wrinkles out of the wet tissue as best I could. Bubbles near the edges were removed by rolling them to the nearest edge with my finger. Alternatively gentle pressure applied onto the "bubble" encouraged the excess trapped fluid to disperse through the tissue pores. The whole lot was left to touch dry before repeating with the other side and the other coloured pieces. If any of the edges lifted, a dab of the glue mix rubbed in solved the problem. 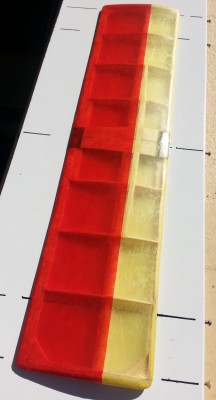 Next morning, the tissue had shrunk drum tight over the film, such that there was a warp/twist. The covering iron on solarfilm heat exorcised the warp with no apparent affect on the tissue

. I then sprayed the tailplane with 2 coats of satin hair spray. I left it all to dry in the sun for an hour, checked the whole thing was still straight, then applied a coat of satin acrylic laquer all over. Once that was touch dry, I strapped the tail plane down on a stiff board and left it to "cook" in the sun (about 23 deg.C) for most of the day.

strapped down to dry in the sun

I've rumaged through my old brushed motors and come up with a 7.2v S280 with gearbox. On 3 cells, it draws only a handful of amps but seems to give plenty of thrust, so it's the propulsion choice at the moment. 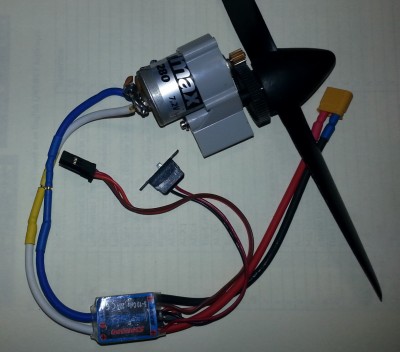 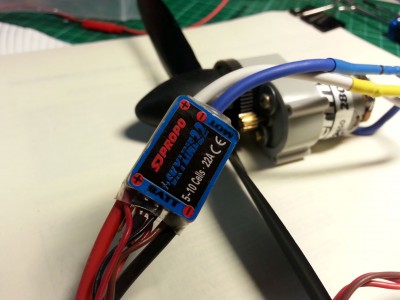 a great little ESC - an oldie but a goodie!

The Tutor wing will probably be done the same, however the transparent film does leave the underlying structure on display (as "agricultural" as it is 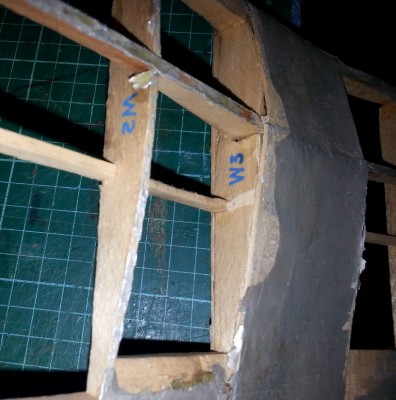 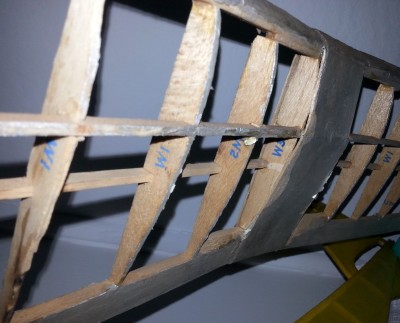 but we are getting there, albeit slowly 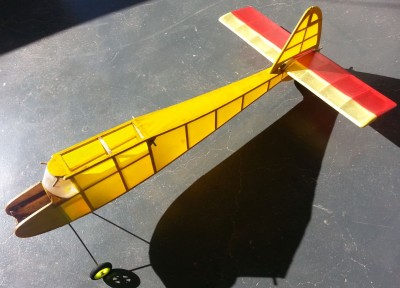 Re: FF Tomboy converted to S/C

Looks nice Wayne. Thanks for posting your covering methods. I must try covering over clear as I've seen many examples like yours where it works really well.
Carl