A few years ago I was rummaging through the "used" loft at our LHS and came across a stack of 1950's and early 60's Model Airplane News magazines which I purchased.

In MAN October 1959 issue there was a build article on Phil Kraft's Bi-Fli biplane. It was being flown using three escapements controlling rudder, throttle and elevator, hauled aloft by a .15 cu in motor. I must have read that article 2 dozen times - probably more, I could not get it out of my mind.....plans at that time were not available. 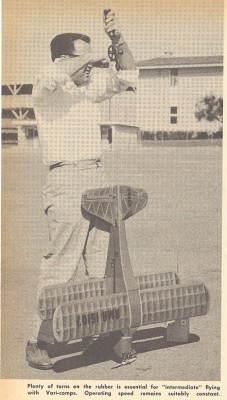 Mr. Kraft cranking in the turns

One day while perusing Outerzone I found the listing for the Bi-Fli plan, promptly downloaded and had them printed off. Construction started immediately .. well in a day or so. I thought this would be a great model for my then recently converted single channel Ace Commander transmitter. 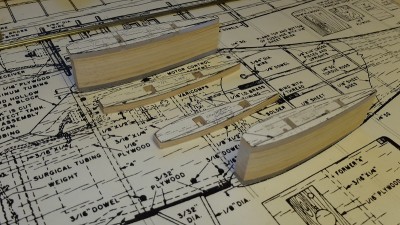 I made a set of ribs first 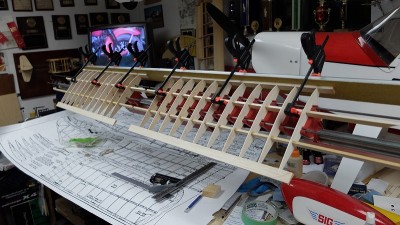 Slapped them into my wing jig & glued in the spars etc.

My workbench real estate is getting cluttered! 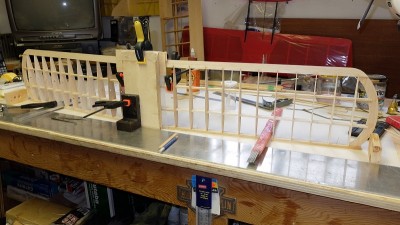 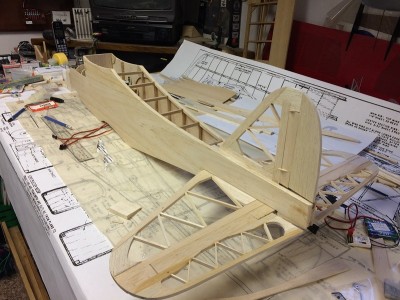 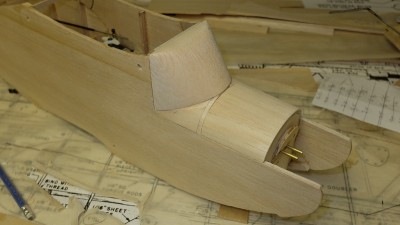 I made a lot of changes in the nose area to accommodate a modern motor mount, fuel tank etc. At this point I was not sure about a .15 being able to fly this thing and needed an option to be able to change mounts if needed. 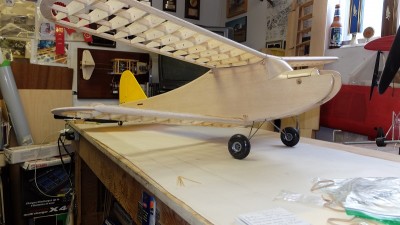 All nailed together ready for covering. The fuselage is already covered with "00" silkspan & dope 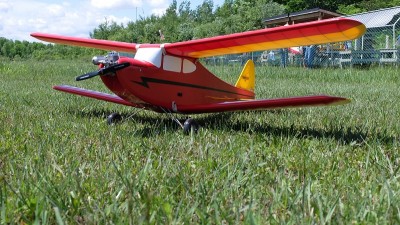 A "before shot" ready for test flights. 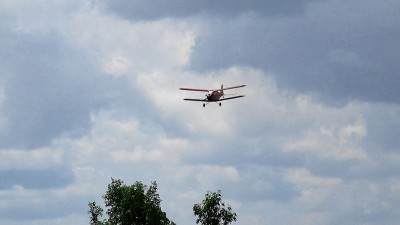 The ground roll was all over the place like a dog sniffing for somewhere to.... Once off it flew quite well. Rock steady on the glide in. 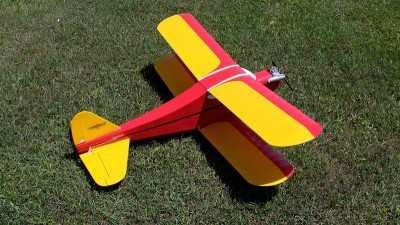 I have to admit I cheated a little bit (a lot actually!!) by installing proportional gear for the several test flights. Good thing I did or the "after Shot" might have had more pieces. I had to wonder how did they ever manage using only single channel to (a) keep up elevator to stop nosing over while simultaneously steering with rudder and also trying to Morse code throttle settings?

Some time later I found some you tube video of Mr. Kraft flying the Bi-Fli off a hard surface. All (!) he had to do was WOT and steer! Our runway is grass. I also found a later video of the MkII version with a much taller fin & rudder similar in shape to that on a Stinson 108-3. This version utilized 6 channel reeds.

I now have it ready & waiting for more for test flying using my converted Kraft reeds transmitter just in time for our annual 6 month ice age to set in.
I think I will find another project for multifunction single channel. 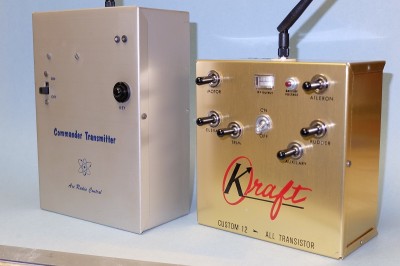 To improve ground handling try some 'toe in' on the main wheels.
Top

A good suggestion jackdaw. I will bend some toe in prior to the next flying session and see how that works.
Right now the wheels are aligned straight ahead, they probably toe out during the take off roll due to flex in the LG wire.

). Plans are printed and LR3 put aside.

Did you end up using a .15 or did you opt for something larger? I intend using electric.
Cheers,

Glad to hear that its on your build list. I had never seen a Bi-Fli prior to finding the old magazine.

I used an OS 15 FP with an APC 8 X 5 prop. Seems to be plenty of power. In fact I throttle down to 3/4 or so for normal flying. The glide with that symmetrical airfoil is surprisingly good and very stable.

Not sure what it weighs. The flight pack consist of 3 standard size JR NES 505 servos because that's what I had and they were new old stock, 600ma 4 cell AA NiCad battery, JR switch, FrSky V8R7-II Rx. Covered the wings and tail with Solartex, fuselage with silk span & clear dope, sprayed on a white dope base layer and masked out the windows and spayed on the red dope, then sprayed automotive clear over everything to insure fuel proofing. So you can see other than some pretty nice wood that I had on hand I did not make any extra effort to keep it light. Although our grass field is well maintained I wanted to make sure the plane would be rugged enough to last!

It should fly well electric powered.

Here are a couple of links to the you tube videos of the original with escapements and the MKII version with the taller fin & rudder on reeds. Definition is not the best but it is great the video actually exists. Hope the links work!

I always get impressed when I see this old films especially when I see the quality of the models....no PnP, ARF etc....
Top

Hi Mike, very impressive project and a very nice model. It’s on my build bucket list. No wonder Phil Kraft became World Champion, after all that morse code Propo must have been easy. How they ever worked the throttle goodness knows. With all those rubber motors perhaps he should have tried Wakefield as well.
Cheers
Top

Funny you should mention winding all that rubber Glyn (and even though I recently built a Kwick- Fli III, then accidentally got an old Kraft Reeds radio set, then built the Bi Fli and have the plans stashed away for a Flea- Fli for one of those one day I might get around to building it projects - I must emphasize that I am not a Phil Kraft groupie or anything like that) but....

From the AMA Biography of Phil Kraft

"First contest model aircraft was the rubber powered Korda Wakefield 1938"
"1941: Won all contests entered in “Under 16” category"
You would think he would have invented the servo following that.

Have you flown the Lightning as yet - I noticed that it is truly an "English Electric Lightning" vs a two stroke Lightning.
Top

I thought Phil was showing great dexterity winding that escapement motor! Thank you for the info on an amazingly talented guy (I’m not a groupie either).
The EE Lightning (!) has had three short flights and it’s looking good so far. It won’t win any gliding comps though!!