The Queen's Cup was awarded to Phil for his rubber powered model subsequently named the Queen's Cup Winner. I covered the Veron story in September 2016 RCM&E.
Top

Paul J
Good summary of Phil Smith's endeavors here:
https://www.telegraph.co.uk/news/obitua ... Smith.html
The 2007 picture was taken at our Salisbury flying site and I have the original of that photo somewhere.
Don't forget the extensive range of boat kits as well:
https://www.modelboats.co.uk/news/artic ... tory/25911
Spike S
(Tune for maximum smoke)
Top

Thanks Spike, 'very interesting. There was a lot in there that I didn't know!

Here is history in the making - TWO Go-Jets in the Scottish Borders, most likely for the first time ever. After one of our "talking nonsense" afternoon teas, Glyn persuaded me to overcome forty years of building sloth and recapture the halcyon days of our youth. Hmm.. come to think of it, it could be 48 years of sloth. Anyway, here is my contribution. It actually arose from a question "How did we EVER manage to build something that would fly when we were twelve and clueless?" Despite also having the benefit of Neil's semi-kit (nice one Neil) I managed to include authentic touches like the banana fuselage and a wafer-thin tailplane from over-enthusiastic sanding. The latter meant I had to forego the pleasures of tissue and dope and settle for Solarfilm. The idea was to faithfully follow the historical precedent and only fly on i/c engines and s/c on the button, but I can't help but notice Glyn has test flown his on electric and propo. I may chicken out in the end. We shall see. Hope to report on some s/c formation flying soon, although I think we should avoid any attempt at the "opposition roll".

Nice model Chris and very funny entry. I didn’t think you would build it so quickly (or at all). I’m thinking an overhead Video of us flying in formation after a shake down period to perfect our flying, I think one flight should suffice!
Well done and welcome on board.
What’s our next project you didn’t tell me..

Here's a little insight into retro model flying in the Scottish Borders. Ashamed to say that I chickened out on doing a maiden flight with a Cox Black Widow and settled for much more sedate 2S lipo electric, same as Glyn. Apologies for the mild bad language half way through as Glyn had a sudden relapse of his Tourettes Syndrome.
Hope this link works as I've not tried to post one yet..

Clearly much fun was had, but most importantly, did the aeroplane (& Glyn) survive the tree escapade unscathed??

LOL, thought we were going to get an attack of 'Builder's Bum' at the end there

Yes the model and I survived the tree excursion intact. I think Chris is holding out for more money before he edits out the swearing and the builders bum!
Top

Well after a substantial delay I have now finished my Go-Jet. As yet un-flown it is finished in the colours of RAE Llanbedr, which was home to Britain's drones and pilotless fight research programme. 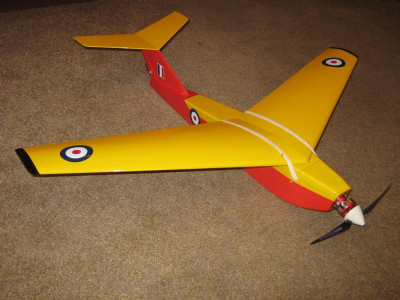