Considering this years Ponty theme and the great flying characteristics of the Pageboy, it seemed only natural to build a 50% version!?! 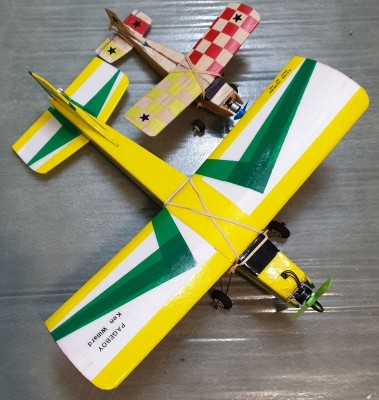 Pagebaby is dwarfed by it's 15" big brother, the Pageboy 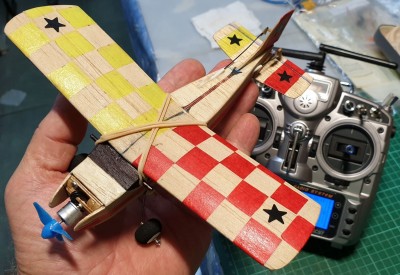 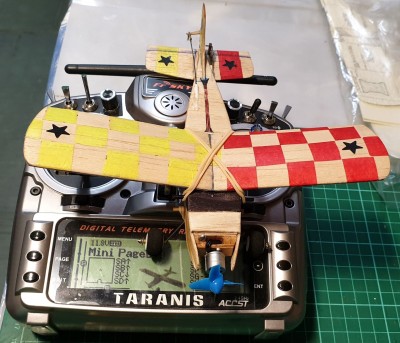 I provided a sneak preview in a post back in November last year. However, I've changed most of the airborne radio bits since that post.

With it's wee size and the minuscule amount of building product needed, you'd be justified in thinking it wouldn't take very long to knock up............wrong

It's taken far longer than I had anticipated, which has been a source of much frustration

. Based on my own procrastination, I've developed a theory --> the less space the project takes on the building board then the easier it is to push it aside to do something else "important", hence the longer the build will take

The corollary is the amount of building interruptions is inversely proportional to the size of the model .

The only changes to the 50% scaled down design were to: Pushrods are 0.8mm carbon rod with wire ends crimped on then CA'd. 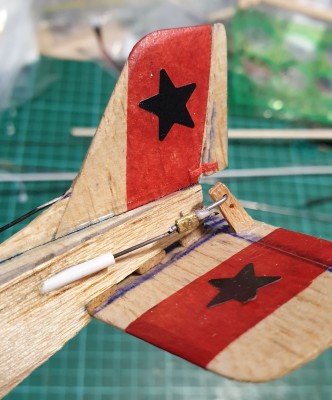 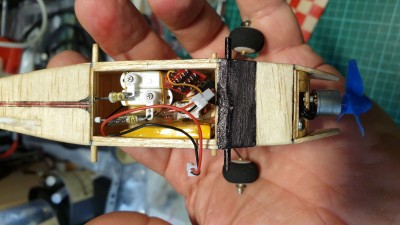 I needed every bit of the widened fuselage to fit it all in.


The cute little 16mm sponge rubber wheels are from Banggood. I had to insert 1/16" brass tube sleeves, CA'd in place, to bush out the holes in the wheels.

The Rx is a 2.2g FrSky clone from Banggood which I fitted Micro JST - 1.25 Pitch sockets to so as to match the 1.7g HK servos. The quoted Rx range is >800m. There is also a Flysky compatible version. 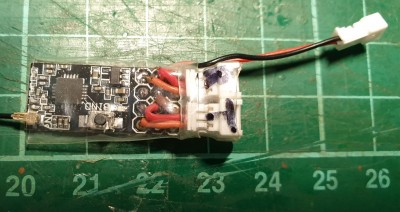 The servo leads were shortened to 60mm. 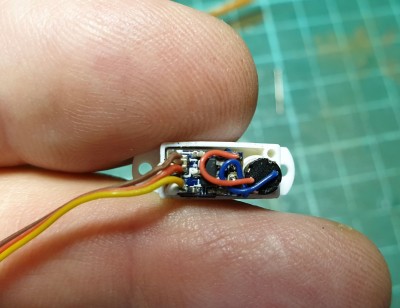 I've since obtained another FrSky clone alternative Rx which looks pretty good too. The quoted range for this one is >300m. 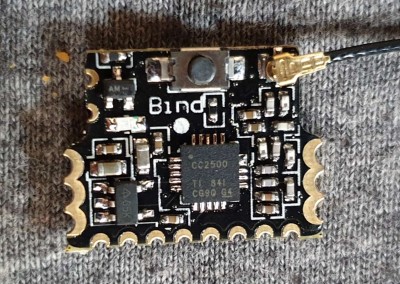 That's still a looong way with such a small aeroplane

I obtained two different props to try - a 4 blade prop, a Racerstar 2435PRO 2.4inch, and a 3 blade prop. The 4 blader was way too much for the little motor, even after I removed 2 of the blades - The ESC shuts down after a few seconds due over-current. The 4-blade was originally intended for the original larger diameter motor which it is well matched to. The 3-blade blue prop is tiny, but there is plenty of static thrust & the ESC doesn't overload. 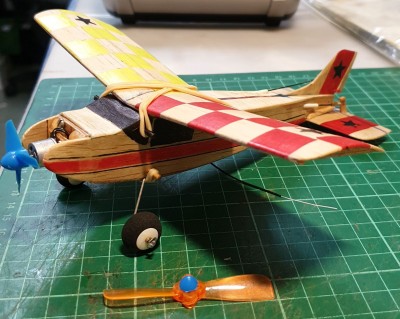 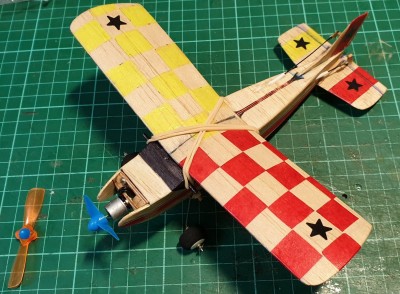 The battery is a 240mah 1s cell. I fitted a 2 pin JST PH 1.25 plug to the battery to match the connectors used on the indoor integrated Rx+servos+ESC I'd obtained from HK a few years back. Imagine my surprise when I recently purchased some 200mah cells from HK with the "same" JST connectors integrated into a plastic housing on the end of the cell only to find the polarity reversed to suit E-flite UMX aircraft. The melting insulation was a clue

Finish is not as good as I would have liked - I still haven't got any dope and the postal service is touchy about transporting it. Consequently, it was my ersatz dope finish of hair spray, tissue trim glued on, then clear acrylic lacquer. Flying weight came out at 33g which was a very pleasant surprise 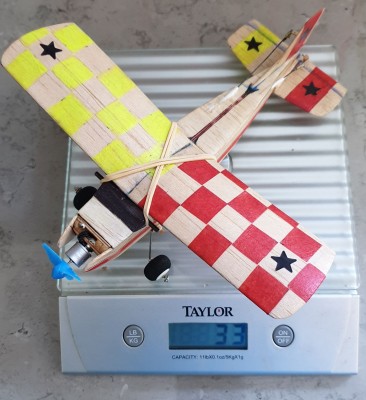 Very nice build and write up.

All the best with the maiden flight.

Interesting. I've recently got interested in FF rubber power converted to rudder RC but still rubber powered. To this end I obtained a FrSky VD5M(up to 1000ft range) fitted with the JST Micro connectors - 1.6gm without cover; the same servos you have HK-5320 - 1.7gm(the 1.9gm HK-5330 servos seem to work just as well although not rated for this low voltage); 160mAh 1S lipo left over from Mcx heli. Total weight 8gm from off the shelf items, amazing! When I think of the size and weight of RC back in the 60's when I started

Nice job. The Pageboy is a good flyer in any size 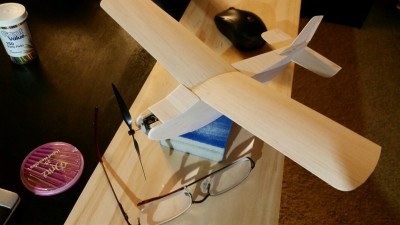