As a young 13 yr old (back when Pontius was a pilate), I used to borrow the 'Eagle Book of Model Aircraft' from the school library - I copied and built many of the models from there. One that always stood out was the Skygipsy - not only was it quite pretty, it flew really well as a f/f model with an ED Baby that I was given at the time.
Since then, I fancied another for one or two channels (and electric of course this time

), so redrew it for the laser.
It's a shameless plug, but I've made the parts available on fleabay. I did do the fuselage sides too, but it's really too big to put in my standard boxes, so I've just laser cut a fuselage template from thin stencil paper to include in the box - leaving the student to complete their own sides . The formers/ribs and wing/tail spars are all included along with some fuselage coverings, so all you really need are LE and TE strips, fuselage sides and the usual covering, balsa cement

picture??
If you would like to contribute a small amount toward the upkeep of this valuable forum then please click the Donations link at the top of the page, just below the mode zero logo. All donations are kept anonymous. Thankyou
Top

Here's a pic of the original in the book ... 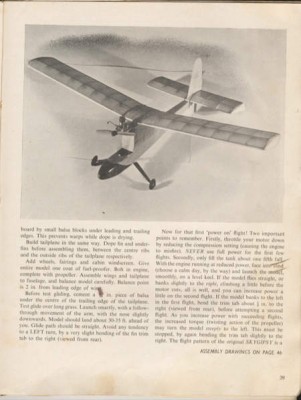 You young wipper snappers, I knew him before he got his wings and was still a rigger!
Top
Post Reply
4 posts • Page 1 of 1