I think I may be late replying as you probably have it built and flying by now!!!

Here are some "how to" instructions that I got with some Sullivan stranded cable lead-out material I bought for my ongoing CL project. I thought I would give it a try as I always used to crimp the cables using some soft brass or copper tubing.

I could not find a bellcrank at any of our hobby shops and did not want to mail order one so I made one using 1.5mm circuit board. Two pieces epoxied together, a 10-32 Allen bolt (about 5mm) running through an RC car bearing. Some small ID brass tube was used to help prevent the lead-out cables from sawing through the bellcrank. I made the bellcrank a 3" and was told afterward that perhaps I should have made it a four inch. My bellcrank is a copy dimension wise of a Sig 3".

Heat shrink was used over the wire wrap lead-outs cause I thought it would look good under the covered and painted wing!

On another model I coated the wire wrap with epoxy glue. 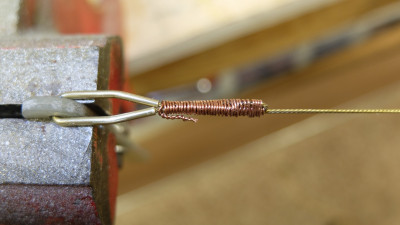 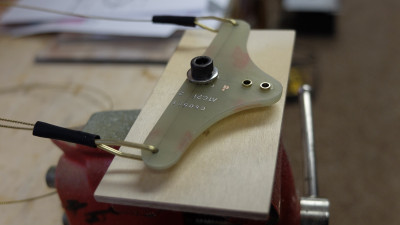 Thanks to all for the replies. Not even started anything yet.
Briefly, my new house built 2007 started developing serious faults January 2016. Since then its been an all consuming and expensive(legal)fight to get redress with many highs and lows. As time progressed more and more serious issues were discovered. The final point is the builders botched the foundations for the whole left hand side front of the house and then tried to 'fix'(?) with a bodge that entailed using approx. 35 tons of concrete. Compounding this is the fact that the l/h side boundary wall is built lengthwise for 60ft+ on top of public sewers(totally against regulations). Welsh Water state that as it is my wall on their pipes I am responsible for all cost to repair if they fail and /or to reposition them. Putting things right, a chartered structural engineer told me, would require at a minimum £150,000 and probably well in excess of £200,000, money I don't have. The final call from the solicitors on Tuesday told me that I had no possibility of a successful claim against the builder or the local authority building control department. So, I spent in total £353,000 on a new house in July 2007 and I now have a house that is uninsured and uninsurable(ad-hock non standard construction), that is unsalable and worth virtually nothing. There has already been a partial failure to a wall not directly attached to the house I have no option but wait for events to unfold, or not. It could be that there is a failure resulting in the house becoming uninhabitable and we end up living in a caravan on the drive. We are living what we have seen happen to others on the TV in programmes like 'Houses from Hell'. So, while my wife and I try to come to terms with having £353,000 stolen from us by a crooked building company I'm not starting any building as my temper is somewhat short.
Bell cranks? - Ebay for Tufnol.
Top
Post Reply
12 posts