Need to make a dive to my attic and pick the next project:
505 Falcon , mint condition, Super Heli Baby or Heli Star, in good used condition and decide if go electric instead of nitro!
You are an inspiration Pete.
Unfortunately I don't have more then a few remains of my first heli a Lark.
The Schluter Huey was my dream....
Top

Well, I managed to get the Cobra airborne at Ponty, but not without a struggle! In the hot, calm conditions, it didn't want to lift off until I increased the pitch on the blades to 8 degrees (the book says 4!).

I've been having a few issues with the motor setup since I put a higher kV motor in over the winter. Occasionally, just after lift off, there would be a loud CRACK - as if something in the transmission had broken - and it would flop back to the ground! It always seemed to happen on the same battery pack, so I was starting to blame that, but a long chat with Phil_G on Sunday suggested that the motor timing in the speed controller might be too advanced, resulting in an occasional "backfire". Apparently this is a well known phenomenon on electric bicycles!

This morning, I've retarded the timing in the speed controller from "medium" (the default) to "low". That has immediately liberated a lot more power - its now lifting off easily at 6 degrees of pitch. Due to space limitations in my garden (plus the size of the Cobra!), I haven't had chance to try a quick spool up yet, but so far, Phil's suggested fix seems to be working!

Pete, your posts got me digging about, and I actually found an old photo of my fixed pitch MFA Sport 500. Guessing 1990 or 1991. I was in my mid 20's and still had black hair. Must have been the first time I hovered her, as I see I am holding a two stick tranny. I switched to a single stick JR which was loads of fun and eventually moved on with Hirobo Shuttles and Kyosho Concept 30's.

This is for you Pete!

Do You have eny more photos of interior of Your electric Huey Cobra, showing ESC and battery mounting?
Was the new electric motor with 580 Kv a better choice?

I have two Hegi Huey Cobra and I think I would like to convert one to electric.
One of them will be 50 years old in 2023, and it competed in first helicopter competitiuon in my country October 28 1973 and placed 2nd. It was no FAI rules then so the hosting club had to make the rules and flight Schedule for this occasion. I post a photo of this Cobra below.
I have read that the main difference between the Schluter Cobra and the Hegi Cobra was the gearbox on Schluter Cobra was in metal (and stamped Shluter on the side of the case) and the Hegi it is made of plactic. Other minor differences described here (in German):
https://www.schlueter-cobra.de/technics ... diff.shtml
Just load the URL in Goggle translator rom German to English if You need the test in English, I think this will do the trick:
https://translate.google.com/translate? ... diff.shtml 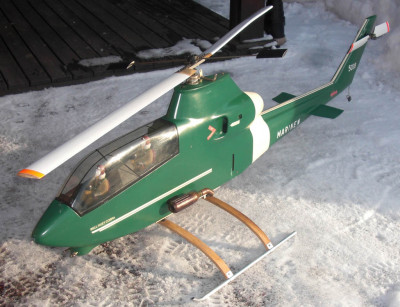 The engine (Veco 61) and gearbox in my Cobra: 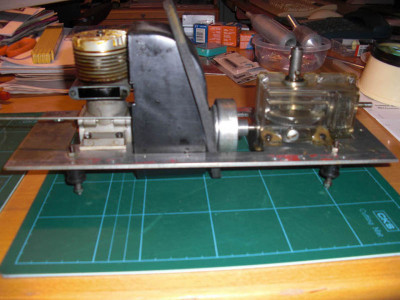 The 13 helicopters that entered the very first helicopter competition in my country (Sweden), in October 23 1973 below. My Helicopter is in the second row behind the Kavan Jet Ranger that is marked "POLIS" (Police).

The winner of the helicopter competion below, his name is Ulf Johansson. As long as he was active flying RC helicopters he was one of the best pilots in our country, he flew Schluter helicopters. In photo below from the competition I do not know for sure if it is a Hegi or Schluter Huey Cobra he is flying but I think it is Hegi Cobra: 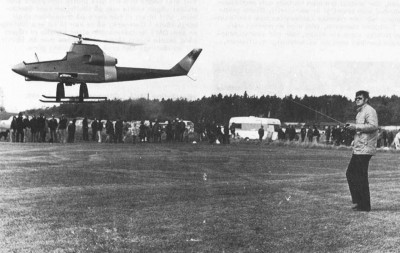 This is the brand of radio that was originally in my Cobra, that was used at the helicopter competition, the brand was OPPS and was made in Sweden (very expensive radio at that time, avaliable in 3-6 ch): 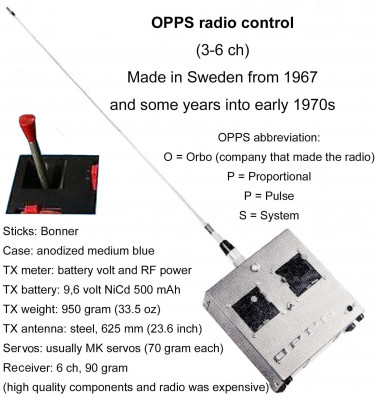 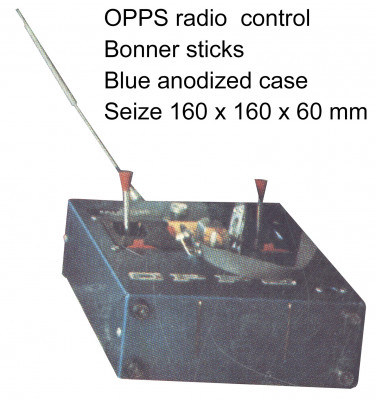 Its probably about time I posted an update on here, as quite a lot has happened over the last few months - or at least, until the weather closed in!

To answer Bo's questions first: The coupling between the motor and gearbox was a flexible one, as I wasn't sure how accurately the alignment between the gearbox and motor had turned out. It eventually failed - probably due to the "backfire" I was getting from the motor, and was replaced by a solid, cylindrical, clamp-on coupling.

This video of the first attempts at flight show the battery mounting. It fits in the floor of the radio compartment:

The backfire eventually stripped a couple of gears in the gearbox! Yes, it was that violent! Luckily, and old flying buddy had some spares, which he donated to me, but I had to rebuild the gearbox yet again!

The motor barely gets warm! Bearing in mind I'm getting 10 mins airtime out of a 5AH pack, which gives an average current of 30A max. The motor and speed controller are both rated at 80A, so neither is working very hard! Indeed, because they are so lightly loaded, I found it hard to believe that it was overheating to blame!

If I was going to do it again, I would be tempted to use a prop-adapter on the motor, and keep the clutch! I have a Hirobo Lama which keeps the clutch, and if you program in a slow motor start, it sounds just like a gas turbine starting up! Mind you, the Lama is flown on collective pitch, and the motor set to constant speed in flight - not really suitable for a fixed pitch set up!

Turn the sound up!

I've now bought some new blades for the Cobra from Germany. The originals are not very straight, and difficult to keep in track!

Next up is to do the same modification to my DS-22! The HP 61 in that is well past its sell by date! This video was taken way back in 2002! That was before I realised that the engine doesn't like Nitro, and runs far better on straight fuel!

Tobe: That was very brave flying a Cobra that fast! All these old Schluters suffer from a runaway nose-dive if you exceed a certain speed! You can only recover from it by shutting the throttle, which then causes the nose to pitch up violently!

The original builder of my Cobra had this happen to him at a flying display back in the early 70s! He thought it was going in, so he shut the throttle, and the thing promptly stood on its tail! He hadn't been flying helicopters very long, and in attempting to recover it, crashed into the roof of a large marquee tent, doing significant damage to the tent! He had to pay for a sail-maker to repair the tent, as well as a new set of blades for the Cobra!

I just live with it and keep the speed moderate!

Today I picked up, bought back my old Schluter Heli Boy that I sold 35 years ago from the same guy that bought it at the same price. The guy never flew it or cranked up the motor but kept it immaculate so now I have a dilemma! Shall I keep it IC and fly it with the original Kraft transmitter as helicopter radio is not needed as the mixing throttle/pitch is mechanical or shall I go electric and fly it with a modern radio?
I would in either case replace the old mechanical gyro with a faithful Futaba GY 401 with relative servo as my left hand is no longer up to speed.
FYI I still have the original fix pitch head option together with the collective pitch one so there I also have choice.
From my original collection of Schluter is only missing the Heli Baby now. I have the Mini Boy, Heli Boy with both training canopy as the Bell 222 fuselage and Heli Star. All are in flying condtion and original with IC engines...but I have installed proper rail gyros

Nice one, Tobe! I sold my original Morleys to a fellow club member around 40 years ago. He put them in the attic and never touched them! On the rare occasions I see him, I ask to buy them back, but he's not selling!

If you look at my Charmouth video (first post at the top of this thread), you'll see my HeliBoy about 4'15" in. Its currently powered by a SuperTigre 45, which is fine for gentle circuits, but not enough for aerobatics! Since that video was taken, I've done quite a bit of work on "fine tuning" it, and it now flies very well. I fitted some more suitable paddles (heavier and bigger) which sorted the handling, and added a boom-stay, which allowed me to run a higher head-speed without it trying to shake itself to pieces!

Work is progressing (slowly) on the DS-22. I have a new chassis plate and a rebuilt gearbox complete. On of my flying buddies has a 3D CNC milling machine, so I'm hoping to persuade him to fabricate some proper motor mounts, rather than the bent aluminium I used on the Cobra!

I've also acquired another "Lark"! A Mk2 this time, and I'm intending to electrify it. I've got all the bits, just need some metal work doing! Watch this space....