Having read through Flynn Futaba conversion and the various comments about the original battery meter and making sure you don’t put too much current through them.
I want to try and avoid burning out the meter in either if my transmitters.
I have found on the NORCIM website a circuit schematic for one of the Fleet systems. That shows a 39K resistor between +ve and the meter. Based on my rudimentary electronics that seems to give the right sort of current. The schematic shows the –ve side of the meter going onto various other components which are part of the transmitter circuit. Do I need these or can I go straight to –ve from the meter without risking damaging it? 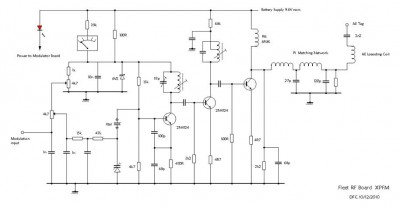 Many transmitters used the meter to display the RF output of the transmitter rather than the battery state. I think that Fleet circuit is doing that.

If you're using the same meter to monitor your battery then I think a 39K won't be enough.

You also need a means of setting the meter so that it 'goes into the red' at whatever battery voltage is appropriate for your chosen battery - with a 2-cell Lithium battery that might be about 6.6 V.

I would use a 100K potential divider between the power rails to scale the battery voltage down - and then connect the pot wiper via another resistor to the meter + terminal with the - terminal of the meter to ground. That second fixed resistor should be at least 39K, but I'd fit a 100K to start with and only reduce it if the pot doesn't allow you to set the meter reading high enough.

Thanks for another really helpful reply. Even better I actually followed what you your saying! Looks like I'm going to have to get busy with the breadboard to try and figure this out!
Every time I think I'm making progress I find another challenge! I'll get there in the end!

you might be better off using a 6v2 zener so you get an expanded scale reading.
I use this circuit regularly and its perfect for a 2s 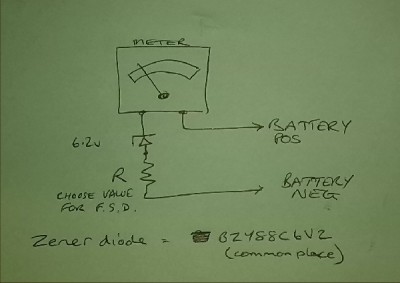 39k is good for that particular 100uA meter in the diagram Doug, there was no 'standard' meter so yours might be different.
For trials, too big a resistor wont hurt anything. Too small might! Its not the coil, its a 100uA meter but 300, 500 uA wont burn it out, its not that that does the damage, its the physical impact of the needle hitting the end stop very hard when too much current passes that usually breaks them.
Cheers
Phil

Ah, so I was wrong about it being an RF meter in the Fleet circuit diagram. I do wonder why they drew the meter and its associated zener/resistor there in the circuit diagram all mixed up with the RF circuitry rather than putting it off to one side to make it easier to understand. I suppose it was because the 6.2V rail was used for other stuff besides being the lower voltage side of the meter connection, but it could still have been laid out more clearly.

Ok I think I’m following this! The 6.2 zener creates the 6.2v rail Martin mentioned. The 100Ω resistor provides the correct current for the zener and the 39KΩ provides the right current for the meter based on the voltage drop created by the zener?
The bits to either side of the zener are parts of the RF circuit?
The diagram was drawn by someone who essentially reverse engineered it from a complete board. I’ve found it very helpful in some ways but not in others. In amongst the meter and LED shown top left there is what I believe to be a DPDT switch although all the pair of terminals are joined at the back so it is effectively a SPDT switch. There are multiple wires connected to this for various different purposes. I’ve been trying to trace them to help me figure out what was happening with the meter. With the answers on this thread I’ve realised I’ve missed something and I think I know what now.

So if build it up exactly as is but using a 2s lipo the meter will just show partially used when fully charged but take a long time to go down? Alternatively if I went for a 3s LiFe it would be much as it was originally.

Interestingly despite the age difference between the two Fleet transmitters the RF board is very similar in both of them with a lot of the components and layout common to both. The big difference is the modulator boards!

Its easier than that Doug.
Choose a zener of the same voltage as your required 'minimum' on the meter.
Choose a series resistor worked out using:

It is when you know what your doing!

Does Rons picture show the right layout. From what I've read you would normally have 8.4v, the resistor then the zener with the meter wired + to 8.4v and - to 6.8v. Hope that makes sense, might be easier for me to draw what I'm thinking!
Ignore the above I've worked out that it's me being thick again!

Phil, are most meters from the early 1970s have the same values?, I have a couple of Futaba's a 4ch and a 5ch similar to your Sprengbrook with the internal mains charger, original power was 8 cell NiCad pack 9.6v, would like to have the meters working as well, I'm going to power the transmitters with 2 18650 Li-Ion cells.

Regarding: do all meters have the same value?
Just a data point, but for car radios:

For my "headless transmitter" (https://github.com/laneboysrc/rc-headless-transmitter) I am using the microcontroller to drive the meter. A PWM output controls the voltage, and I have some "calibration" in the software that allows me to set maximum on the meter when the battery is fully charged. The meter is connected to the PWM pin with an appropriate series resistor, and a capacitor as filter.

I was converting my Sprengbrook tonight and when I got to doing the meter, I thought maybe a video...

This isnt limited to retro-transmitters of course but its a question that is frequently asked...
When we run a battery 'flat' its not completely exhausted, but it is down to the minimum that our equipment is happy with to run properly & predictably.
For the common 2S lipo or LiFe that we use a lot in transmitters, the useful voltage range is 8.4v when full, to 6.2v when flat. You could run lithium cells down below 3.1v per cell but utimately this would damage the cells.
So ideally, a battery meter would read from 6.2v to 8.4v across the full travel of its indicator needle.
To do this we use a zener diode and a 'multiplier' resistor in series with the meter. The zener directly determines the low reading, ie 6.2v with a 6.2v zener. For the upper end of the scale, subtract the zener voltage from the desired full scale voltage, say 8.4v - 6.2v = 2.2v

The meters FSD current is usually printed on the rear. In my case its a 100uA movement so using ohms law we can find the value of the multiplier resistor:
R=V/I
R=2.2v/.00001A = 22k ohms.

One more example for say a 9.6v NiMh. Fresh off charge these can reach over11 volts, and you wouldnt want to go below 1.1v per cell, ie 8.8 volts. So a scale of 8.8 to 12 would make good use of the meter range. For the low end we use an 8.8v zener (or the nearest standard value). For the upper end of the scale, subtract the zener voltage from the desired full scale voltage, 12v - 8.8v = 3.2v

Just substitute your own preferred upper & lower voltages, and choose a zener voltage and resistor value to suit. Or choose the 'low end' zener and use either a preset pot or a selection of 'test' resistors to set the upper range if you're not sure of the meter FSD current. Start high and reduce the resistor to give FSD at the desired voltage.

Note that the banded end of the zener goes towards the battery positive.

Hi Dave, not necessarily but 100uA is a common value, just substitute whatever FSD value you have into the R=V/I equation. Or cheat and use a preset pot to set FSD!

Hi Werner, welcome to the forum!
Thats a very nice project, I can see a lot of work has gone into it, very impressive