Reposted from 2012, prompted by an article in this months RCM&E:

Maybe I'm one of the few with one-way gear but I've been using it since helping with beta testing and the V8 stuff has been supremely reliable.
I've seen a few posts from people who had detached V8R4 antennas, but never paid much attention until I received my last order from the big fish, which included a V8R4 with no aerial at all.
I've fixed it, thoroughly tested it and its 100% so I wondered if the fix might be of interest to others. Unfortunately I didnt take any photos, if it happens again I'll take some.

What I did was to first clean off all the 'goo' by warming it and gently picking at it. The pcb land to which the aerial should have been soldered appeared to be missing - probably came a way with the aerial - leaving nowhere to resolder a new aerial.

To find the aerial input I set the tx module to low power, set the tx to sweep, got the rx linked up & a servo sweeping, then moved the tx well out of range, way beyond where the rx stopped working (still with no rx aerial).

I then took a 30mm pin, pushed it through some 1/4 square balsa, and under a bench magnifier and with the rx powered up and holding the balsa, touched the point all around the original aerial position. Next to the missing aerial connection I found that at the junction of two SMT components, touching the pin gave an instant link, removing it dropped the link.

I switched off, soldered a 33mm length of servo wire to the junction of the two components, & switched the rx back on again. Got an instant link, and a low-power range test proved all was back to normal. Checked the solder was a good mechanical joint and applied a good blob of evo-stick to support it. Did a range test on full tx power and ran out of space at half a mile, with rx still working fine at that range. I'm not suggesting all breakages can be as easily fixed but this worked for me. Wish I'd taken photos, too late now but next time I will.
Cheers
Phil 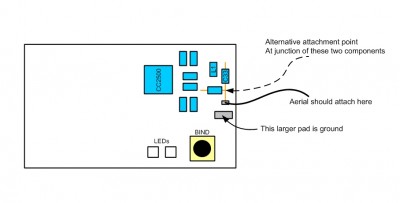 Edit 21st June 2018 - this particular receiver has been in regular use in my Tomboy since the repair in 2012, in 6 years its never missed a beat

Mike gave me one of these receivers in his solar plane, with the warning that he'd tried to fix the antenna, but that the range was now poor.

I've flown with it few times - never very far away, but today I did a proper check and the range was indeed very bad.

I've just taken a look at it and not only was the antenna attached to the wrong place but the capacitor C33 is missing from the board - that's the one above the connection point in Phil's diagram. Any idea what sort of value C33 should be? I do have a mixture of surface mount capacitors, and a capacitance meter so I could try to find one about the right size and value and solder it in place.
Top

39pf Martin, its in series with the aerial, so if its missing there will be only minimal coupling.
It would be better shorted than missing

I soldered in a capacitor and added a new antenna, but the range was still well down - either I botched the repair or there is something else amiss with that receiver. I swapped it out for another V8R4 and have consigned the dodgy one to bench testing only duties - I should probably have thrown it in the bin, but I've not done that just yet!

Off topic, but at the field Fred had problems with one of his planes which we traced after much swapping around of servo plugs and extension leads to a FrSky receiver (a D4R-II this time) that had one faulty output channel with the remaining three channels still working perfectly. I've never seen that before.
Top

Martin
I’ve had that problem with an orange receiver.
It was a 3 Channel one and the rudder Channel was intermittent, I checked with my magnifier and couldn’t see any poor joints on the plug pins or pcb.
It was really odd because you could make it work by putting your hand near it, like a capacitance problem somewhere. Never did sort it and because of how cheap they are I just binned it.

Ron.
If you would like to contribute a small amount toward the upkeep of this valuable forum then please click the Donations link at the top of the page, just below the mode zero logo. All donations are kept anonymous. Thankyou
Top

Follow his lead Martin, Bin it! Its not worth losing a model over an inexpensive receiver