There was a full thread on these back on the old server, lost of course but here are just a few notes.
The Hitec HPF-Mi is a 35mhz RF module in the 'Futaba style' which is ideal for the conversion of 27mhz sets like my KO DigiAce: 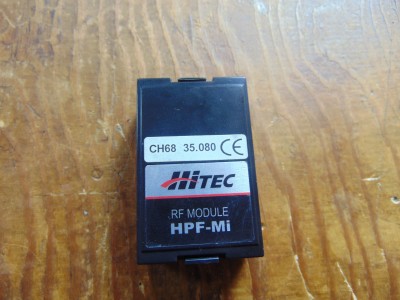 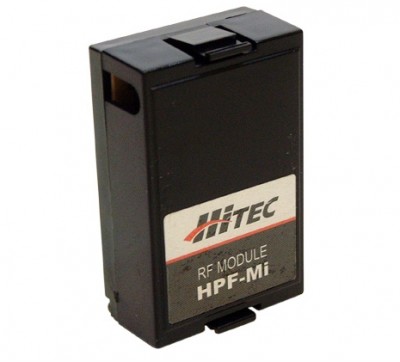 Connections:
The connections use the standard Futaba pinout, battery pos, battery neg, PPM and the aerial.
The aerial wire is kept short and is run directly to the aerial base, keeping it as far away as
possible from any other wiring:

Aerial:
I've measured several Hitec 35mhz aerials and they are all 47" or 120cm. Its not that critical with these base-loaded modules but If your 27mhz aerial is longer, simply retract the top section to leave 47" extended.

Power:
The module is intended to be powered by 8x NiMh or NiCd cells so I run mine from a 3S LifePo4 which is the same voltage and doesnt have the self-discharge problems of NiMh and NiCd.

Crystals:
You must use a Hitec or direct equivalent crystal, unlike Futaba who double from a 17.5mhz fundamental, Hitecs triple from 11.6mhz so the two are not interchangeable.

Receivers
Not at all critical, genuine Hitec receivers are fine... 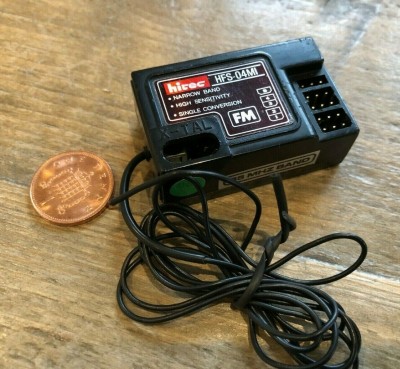 Be aware that the Hitec receiver IF is above the tx frequency whereas on most including Futaba its below, hence you must use the appropriate rx crystals - or use a synth receiver. 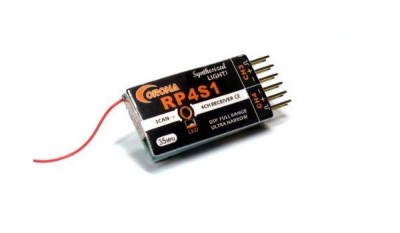 Availablity:
A couple of years ago we bought several HPF-Mi modules quite cheaply from Scoonies Hobbies, and from Profi, - with crystals - they may still have stock, otherwise they do appear on ebay from tine to time. Its a hardy module so used ones are unlikely to be a problem. Friskified Optic-6's for example are another source.


Use in traditional 'tone' sets:
The Hitec module is also suitable for a genuine, tone 35mhz S/C set (ie not an emulation) - they can be fed with a 1khz square wave at the PPM input, enabled by the 'tone' button - like my Macgregor tone set. The PPM signal (or 1khz tone) is internally processed so there is no possibility of over-deviation, its foolproof.
The receiver in this case is 'half a Micron' in that the decoder is removed and replaced with a small board having a couple of components for sync detection and a vmos power fet to drive the escapement:

Hope this is still of interest, if anyone wants to add their 35mhz module experiences to this thread, please do

I know Frank has had great success with Jamara 35mhz modules.