Mike_k,
Blimey, inks not dry on your birth cert. In '75 I was married with two children 7 & 5, a new house and a very large mortgage, a new car and a new Jolly Roger trainer with an Enya 35 all controlled by a Futaba DigiMax 4. It was my start into RC modelling, although I'd been aeromodelling since the mid 50's. It lasted 6 months; late October I decided to call in to the club field on my way home from work as I had the plane in the car, it was dusk as I took off and it got rapidly darker as I flew, lost sight followed by regained sight but lost orientation, froze on controls followed by large hole in ground covered with extensively re kited plane. Oh the foolhardy enthusiasm of youth. The following winter months saw me building a Galaxy models Escort powered by an OS19 with kit built Micron Rx and kit built Skyleader SRC-1 linear/rotary servos. The rest is history.

Was there another manufacturer of a Jolly Roger kit? Mine was a tail dragger with foam wings. I still have the plans and from time to time have considered building one again for the nostalgia.

PS Don't worry about the hair. When you get as old as me you'll get it all come back, like most men do, only trouble is it grows out of your ears and nose.

Thanks, Mike_F for the calculator, it's interesting to see what I should have been doing with some of my other engines! I have bought some "Duraglo 5", which is a mixture of synthetic and castor on the advice of Ali at Al's models. I've run the engine on a test stand yesterday afternoon and once I'd fitted an idle bar type plug it runs really sweetly with a good idle and great transition.

As far as the Jolly Roger trainer, well my plan definitely show a trike undercarriage, maybe earlier or later versions had a tail dragger option? I eventually converted mine to the Jolly Roger Super with a semi-symmetrical section aileron wings and an Irvine 45, which is still in the loft. But its a bit like "Triggers broom", it has different wings, a fibreglass undercarriage as the dural one got too bent out of shape and most of the fuz is new balsa repairs from the original. 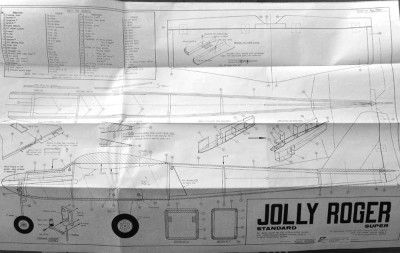 Mike,
I've got two OS Max 40Hs - one is the one I used in my very first helicopter, a Morley 2B. These days I run them on Bekra straight (no nitro), though they would probably be fine on 5 or 10%.

Not had any problems at all, they run just fine on Bekra fuel - indeed, they seem to be better! I never could get my original one to throttle properly on castor "back in the day", and ended up fitting a Kavan carb for use in the heli. Now, on Bekra, it throttles fine on the original carb! Go figure!

Early synthetic oils did suffer from issues, and manufacturers like OS specified castor to avoid warranty claims. Times have moved on, though, and modern synthetic oils are just fine - indeed even better, as they don't gum the engine up with varnish!

Castor fuel belongs in a museum, not in an engine!

Phil_G wrote: ↑
06 Sep 2019, 13:19
If you go to a scooter shop, you can buy synthetic in strawberry, raspberry, watermelon, peach, orange, lime, mint and a load other aromas. I'm not joking, this is a 'thing' amongst 2-stroke scooterists

Ah! But will they mix with methanol, Phil?

Castor fuel belongs in a museum, not in an engine!

As I was pleased with your previous advice to use Bekra fuel, I tried the OS 40 Max H with Bekra straight on the test stand and it ran perfectly, gaining 250 rpm over when using the "Duraglo 5" (I ran 3 back to back tests to ensure it was not a one-off). It also reliably idled a few hundred rpm lower as well. How can fuel with no nitro gain rpm and idle better than fuel with nitro?

The next day I mentioned this to a few mates at our club and one has run his OS 60 Max H on Bekra for a few years with zero problems. He said the only problem he has heard of running Bekra in old engines is that it slowly removes the internal castor varnish and carbon build-up, so you may get small lumps coming away that can blow a plug. As mine is fairly clean inside I can't see that as a problem.

And as insurance against the Bekra oil not giving satisfactory lubrication and causing premature wear, I've bought two more from eBay

The one big downside to Bekra fuel is that the exhaust doesn't smell too good, unlike the castor based fuel, but I guess you can't have everything.

Glad to hear it worked for you, too!

I think the improved RPM and idle is due to the lower viscosity of synthetic oil compared to castor. Castor is quite thick and gooey, and probably increases drag on the moving parts of the engine.

And your friend is right! Good synthetic oils will slowly clean all the varnish and gunk from inside an engine. Pity it doesn't work on the outside as well....!

Phil_G wrote: ↑
06 Sep 2019, 13:19
If you go to a scooter shop, you can buy synthetic in strawberry, raspberry, watermelon, peach, orange, lime, mint and a load other aromas. I'm not joking, this is a 'thing' amongst 2-stroke scooterists

There used to be available a product call Sunbeam Frypan cleaner that would clean engines exterior to as-new sparkle.
Sadly in Aus at least it has been withdrawn from sale in the last few years due to it's contents "not being safe around little Johnny".
Top
Post Reply
19 posts