Any radio hams out there? Say hello.

Past all exams for a full licence back in 1984 but never got the licence due to divorce, got it much later. Can't remember call sign and paperwork is buried in the house somewhere

. Now days it seems a little pointless with the reach of 'tin ter net. I'll explain; I'm insulin dependant diabetic so holidays abroad with all the hassle of needles, keeping insulin cool, eating regularly on time etc is a no go. But I'm happy for my wife to travel and see the world. She went to Borneo to see the Orangutan rehabilitation center in the jungle. The lodge had wi-fi so she Skype'd me regularly. She went to Kenya Masi Mara game reserve and Skype'd me regularly from the 'safari hut'. She's also been to Vietnam and Cambodia, same again. In fact the hardest place to Skype from was Cuba. Short haul holidays are easier. Although, she's off for a Nile cruise and excursions to the sites with the middle son next April, not sure if she'll get wi-fi on the boat.
I've got a couple of hand held 2m/70cm but its as dead as the grave where I live.
Top

Yup G6CVC here (Jonathan) was originally VHF only but discovered my licence is now upgraded to include HF. Have acquired done lovely old Icom gear but no decent aerials yet. I intend to get that sorted soon so I can transmit. Listen lots on 40 and 80 Mtrs
Reconstituted boy
Top

From the other side of the pond

I wanted it in the 80's when I was in college and flying models to get on 53 MHz away from crowds. Never got around to it. Finally did a few years ago. I wanted to play with Autonomous aircraft and thought it was a good idea. I bought a small handheld based on a friends recommendation and sometimes listen in at night.

I though my call sign was brilliant. It was assigned and I had nothing to do with it. But I immediately realized it game me a signature.

I was fortunate in that the licensing authorities were just getting into the letter P's as I was applying for my A, so I asked nicely if I could possibly have G4PHL and luckily, I got it! Prior to that my B license was G8UEB which I never liked

Me & my Dad went to Mablethorpe together to take the morse test, long time ago but I remember being more scared than I'd been for any exam I'd taken at school! The only other lasting memory of Mablethorpe Coastguard Station was that there were hundreds of rabbits, rabbits everywhere!
The problem with learning morse is that once you know it, you cant hear morse without mentally reading it, which ruins war films where more often than not the morse is actually gibberish, or a "whats that Skippy, they're trapped down the mineshaft?" kind of thing

I only have a Yaesu FRG7700 comms rx now. And a cheap 70cm handie - Baofeng UHF radios cost twopence and do everything! Used to enjoy the old Reverend Dobbs Q-QRP stuff and also used to do 27mhz CB mods to 10m FM for the lads, I did a board for the Icom ICB1050 that upped the band to 10m and gave you scanning, priority channel, one-touch reset to the calling channel (29.6), auto repeater shift, reverse-repeater, etc. I still have an unconverted ICB1050 somewhere. In those days software development was on glass-windowed PIC chips that you had to erase in a UV exposure box - a very slow process compared to todays arduinos and a serious incentive to write bug-free code first time

Built a 2m to 10m transverter which worked very well, still have it somewhere, & had a lot of fun with various homebrew QRP sets. Enjoyed contest working for a while, 2m & 70cm from local hilltops.
Wrote an RTTY mailbox for our local radio club that lived on my very unreliable Nascom 1, later migrated to an EACA Colour Genie which I still have somewhere. Did RTTY and CW tranceive programs for the Genie for a while, but there wasnt a huge takeup. Moved on to a CP/M 'Bigboard' and finally had some reliable storage with 8" disk drives! Wrote a CP/M version of the "Cambridge" packet-radio protocol used by the BBC Micro and for years ran a packet-radio BBS GB7PHL and a Fido land-line BBS, but was later reprimanded by the RSGB as I'd interfaced the two with a homebrew box of tricks that emulated both a TNC & Fido client, with transparent messaging between the two. The Packet Radio BBS was unusual in that the caller could QSY the station between two packet channels, 144.650 and 144.675mhz. The RSGB didnt like that either! All the radio & BBS stuff was in Z80 assembler, 'Zeap' on the Nascom, M80 on the CP/M box, ZEN on the Genie, and MASM on the PC if anyone remembers those. Did a morse and RTTY reader for 'Ham Radio Today' mag - no affordable commercial readers back then! It was unusual in that it used a Z80 with no RAM at all, just the internal registers which was a challenge. Having no RAM meant no stack, so subroutine calls were tricky, theres no onboard RAM in a Z80! All good clean fun but seems a very, very long time ago

Gosh,
you sure brought back memories....I have no musicality or sense of rhythm but after 6 very intensive months i passed the Morse code and still today i'm astonished about this my achievement. Unfortunately my hearing is starting to miss several frequency ranges and it's getting more and more impaired so today Morse for me is getting more and more difficult despite different filters. Unfortunately it's the token I have to pay after more then 30 years in an airplane cockpit.

PD7CW. Ham operator for about 5 years now, only interested in CW morse code communication.
Designed and made my portable 7 MHZ/40m 4 watt CW transceiver a few years ago and still upgrading.
Analogue iambic keyer (2xLM324) and solid state direct conversion receiver and transmitter (IRF510). Antenna, a tuned (CLC) 11 meters long sloped wire at 5 to 1,5 meter height(?) in the garden.
Greatest distance until now, received in Dimitrovgrad (Russia) at 5852 km distance and communicating with all countries in Europe.
73 PD7CW 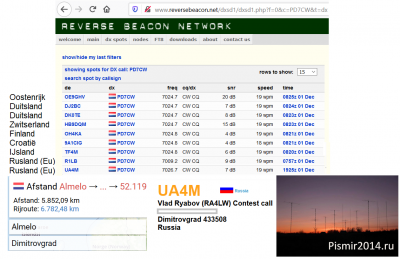 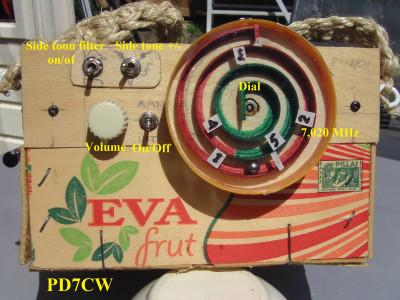 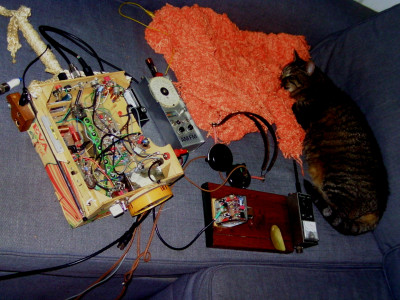 I remember attempting to learn Morse with a cassette tape when I learned to fly. They still use Morse identifiers on the radio nav beacons. The first letters I learned were NSOJ and A, after a few weeks I had a nightmare where a Gollum like creature held me down and shouted 'JASON' at me.
That was me done with Morse...!
Still fascinates me though.
Top