I wonder if anybody can please give me some help on glow fuel?

At a recent club night, I bought a used but good condition OS 40 Max H. I was hoping fit it in a Super 60 I've recently acquired (I know it will be over-powered) as I had this combination in my youth. Flying it with my Skyleader will be just like 1975 again!

For the last couple of years, I've been using Model Technics Bekra on the advice of Pete Christy. I must admit I love Bekra, there's little exhaust mess, good performance and not a dead stick since I started using it. And it works OK with both 2St and 4St and even my Cox Queen Bee R/C run fine on it. But I seem to remember that OS recommended 25% castor for these engines and that you shouldn't run them on synthetic oil. Was that based on early synthetic oils and modern synthetic oils will be OK?

I don't really want to go back to the goo of castor, but I don't want to wreck the engine before I start.

In my opinion, running old motors on modern synthetic fuels is fine - that's what I do with my own old motors and I've had no problems.

The instructions that you get with old motors don't really apply now - castor based fuel was the standard back then and synthetic oils, even where they existed, were mostly untried, untested, and distrusted. Mineral oils were always considered a bad idea for most glow engines - even if you could get the oils to mix with methanol.

I think in the early days of synthetic oils, the oils were perhaps different and a lean hot run could result in damage - the advice then was to use a castor-based mix, or at least a mix that contained a little castor oil even if it was mostly synthetic. But I don't think that applies any more - and in any case you should always try to avoid leaning out a motor excessively, regardless of the fuel you use.

I don't use any castor now, and haven't for years - it makes your models grubby and sticky, and eventually varnishes your engines, both externally and internally.

It will be interesting to see other opinions though.
Top

The OS Max 40 H (http://sceptreflight.com/Model%20Engine ... %20RC.html) is one of those engines with a cast iron piston ring on an aluminium piston in a steel cilinder.
Anywhere cast iron and steel are meeting, under pressure and high temperature, castor oil is THE nr. 1 choice.
Castor provides the final sealing of the ring and cilinder wall.
Running it on synthetic wil dissolve this seal and you will end up with an engine that could display loss of power, instable running and harder starting.
This also applies for ring less engines with entirely cast iron pistons (Fox 35, Mc Coy 35, OS Max 29, OS Max 35, OS Max 19, OS Max 15, Webra Glo Star, Webra Sport Glo, and most if not all Cox engines, etc.)
For ABC, AAC and other, aluminium piston, ring less engines, castor will be too sticky fo running well, so there it is just the opposite.
The flip side of the coin is of course that castor will build carbon deposit. Sooner or later you will have to clean it all.
But for running: Castor.

I'd add older Enya engines to your list of cast iron piston engines that should be run with castor eg 09,15, 19, 29 and 35. Spares are in very short supply so why risk it.
Top

I prefer the smell of caster oil if that helps

Reminds me of my early motor bike days.

Ron.
If you would like to contribute a small amount toward the upkeep of this valuable forum then please click the Donations link at the top of the page, just below the mode zero logo. All donations are kept anonymous. Thankyou
Top

I'll buy a gallon of castor glow on my trip to the model shop. I guess if I want it authentic from the '70s, I've got to have the castor goo to clean off the model!

Don't forget the flairs, tank top and the all important 'Pedro' moustache!

I can manage the flair bottoms and maybe a rally jacket with Skyleader cloth badges (I cut the Skyleader badges off my rally jackets before I got rid of them and still have the badges). I've even got Fleet and Futaba cloth badges that I could add.

But a moustache?! Blimey, you must be kidding. I was only a young teenager back then and couldn't manage any facial hair. In fact, this is the look back in 1975 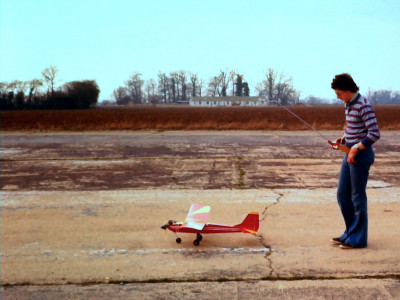 For those of you wondering, it's a Rojair Jolly Roger trainer with OS Max H 40P with Skyleader TS on 27MHz orange. And yes that was my real hair, complete with a perm... I've still got the Skyleader, the Jolly Roger and the clapped-out OS 40. Unfortunately, I've lost the hair somewhere

I have a wide variety of model engines ranging from the late 50's through the 60's, 70's 80's and late 90's that still run perfectly including Fox 15, 35's, 40's etc, COX engines, many Enya's that I still run as well as OS 40FP, FSR's, Fx and AX series in assorted sizes and a few misc four strokes. I usually use 10% nitro with 18% oil which is a mixture of synthetic & Castor oil in all my two strokes except the Fox & Cox. My favorite brand is Byron's Aero Gen 2 Premium 18 which is 10% nitro and 18% syn/castor mix oil. It is not easy to get in Canada and probably non existent in England. When I cannot get the good stuff I resort to another brand which claims to have 17% oil to which additional Castor is added to bring the oil content to at least 18% to 20%.

The Fox engines usually get additional castor oil to bring the total oil content to 25%. The COX engines also like a lot of oil which some must be castor if you want them to live a long life. The Oil content for COX that I have used is anywhere from a minimum of 20% up to 25%. They seem to run OK on 10% nitro, better on 15% nitro as long as they have a lot of oil.

I have attached a little spread sheet that I found on line which helps me determine how much to add with out becoming a math/ chemistry genius. Please note that all of our fuel comes from the USA here in their 128 ounce "gallon" sizes.