Its not the steady regulated ESC voltage Allan, or the steady current it can supply - its fast surges/spikes superimposed on that DC level, more down to the ESR of the BEC than its stability

Another option is a separate actuator battery, splitting the positive at the DRV8838 as described in the DigiSpark recoder thread: viewtopic.php?f=25&t=599
I've only just realised that the very original recoder thread was lost with singlechannelersreunited - its a bit late in the day now but time permitting I'll see if I can find anything. It also had the 'separate battery' option, and even if the thread is lost I do at least still have the old diagrams...
Basically its a case of splitting the pin 2 to pin 9 link on the DRV8838 and supplying a separate pos to pin 9.

I find 16mhz to be very stable and repeatable, its just an opinion but I think it might be because the PLL, whilst locked to the input frequency, has a lock time-constant so it can can free-run over any minor input hiccups or noise, just like any textbook PLL. Its just an opinion

Thanks for the explanation Phil. I'm still surprised to be having trouble with this ESC as the Fidget was published in the AMAs Model Aviation as a new modern model to try GG with, using one of the actuators from Jay. The author never said anything about having any trouble with the actuator and I have to assume (I know, my bad) that he had a lot of flights on the system before publishing the article. I used exactly the same ESC and motor he used just so I wouldn't have any possible problems. I guess you never can predict these things, so mine may still be a little different from his. I have to be out this morning, so a quick stop at the local Radio Shack will get me a 100 ohm resistor. Now if our first arrival of winter weather with it's gusty wind's will blow through before Sunday I'll get a chance to see if the resistor helps.
Top

Ditto for me too - always 16, without issue

Well, I installed a 100 ohm resistor across the motor leads. Last Sunday I flew the Fidget and about three minutes into the flight it suddenly rolled 90 degrees to the left, just like it has been doing, so the resistor didn't do anything. Next I installed a 4.8 volt Nimh battery. Tuesday I tried again. It flew the first flight without incident, the plane actually flew six minutes, but since I didn't put a switch between the battery and receiver, by the time I plugged in the receiver battery, installed the wing, plugged in the motor battery and took off, then reversed that procedure after landing, the running time for the actuator was probably over eight minutes. The second flight was a repeat of the first, but while I was taking the wing off to unhook the receiver battery, the actuator stopped for a instant, then started working again. Since I wasn't looking at the rudder, I can't say where it was positioned at the time, but if it was with full rudder and up elevator, the results in the air would have been a sudden roll to one side. I won't get to fly this weekend, but I'm going to put a switch in the system so the actuator won't be running while putting the plane together, then maybe one day next week trying another couple of flights. I would like to say the problem is cured but at this time I don't know for sure.
Top

After Allen's last inputs I did some additional tests.
I found out that the 100 ohm resistor on the actuator will eventually become quite hot and here the wattage might be a factor at which point it stopped doing its intended work unfortunately. In this test I took 3 exactly the same speed controls and found first of all that they all behave differently with the same test actuator and that the applied load had a direct impact in how/when a glitch showed up. Power to the speed controls was delivered by a stabilized power supply.
I woul recommend thus, if not confident with your "voltage regulator " to utilize a regular 4s NiMh battery pack with capacity of at least 800mA as an actuator in a not to smooth set up could pull 300 to 500 mA
Last a reminder, GG actuator of every kind are extremely affected by the freedom/stiffness in the set up which can't be compared with a regular servo.
Top

I was playing with one of your Rand actuators yesterday and I managed to get it to regularly "freeze" when set up with a very stiff linkage. It would occasionally stop at random locations for maybe a second or two, I assume this is the problem others are having? But the same actuator with a very free sown hinge (I've finally got round to trying them) and I couldn't get it to "freeze" in 15 minutes playing (I got bored after that).

So in my opinion, the problem is stiff hinges/linkages and fitting 100 ohm resistors may help, but it's better to solve the root cause.

Also when it temporary freezes, it's isn't the Arduino resetting. I'm using Phil's program slightly modified with an Arduino Pro Mini and modified it so the on board LED latches on when you press a switch (ie if the Arduino resets the LED would go out). It stayed on at all times. Then looking at the circuit again, the Arduino can't actually stop the motor, signal on goes in one direction, no signal the other direction. So it must be the motor bridge causing the problem. I've got some other higher rated bridge drivers, I'll try a few of those tonight to see if there is a difference.

As I've already told Tobe, the hinges on my Fidget are sewn hinges, they are very free and the surfaces will fall if disconnected from their own weight. The push rods are carbon fiber tube and touch nothing in the fuselage, the only points of contact are the links on the actuator and the tail surfaces. There is no pattern to the problem, the Fidget might fly three flights and not do anything, then it will suddenly glitch, sometimes a couple of time in one flight.

Tobe, the last two flights were with a Nimh battery, not the ESC, powering the system. I don't really have room in the Fidget for a battery bigger than 800 mah, so I'm using a 350 mah Nimh battery. Those last two flights had the actuator running for something close to 18 minutes. When I recharged the battery afterwards, it only took 133 mils to top it off, so there is no indication that the system is pulling a lot of current. The resistor I installed is a one watt resistor and it sits real close to the fuselage top. I'm going to pull the actuator again and see if there is any signs on the balsa of the resistor getting hot. I may just go ahead and clip it off the motor since you don't seem to think it is doing any good.
Top

I was tidying up my workshop a bit this afternoon and picked up an original Rand LR3 laying on the bench. Someone posted earlier that theirs had a 100 ohm resistor fitted across the motor. Well this one had two inductors/chokes and a couple of capacitors fitted and no sign of a 100 ohm resistor. 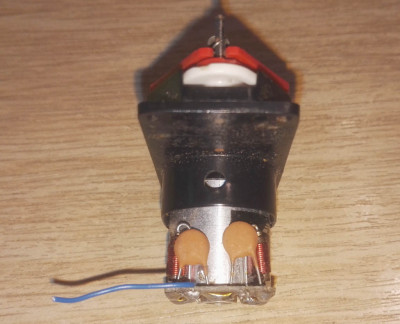 I then got out the other Rand LR3 I have and all of them had the same two inductors/chokes and capacitors fitted (though they were directly soldered to the motor and not via the small PCB).

Does anybody know the value of the chokes? The value is a little too low for my LCR meter to measure accurately but it read 6uH (but some of that could have been the test leads).

I wonder if a similar setup would help with the glitching problem with our Tobe Rand actuators?

10 to 15uH chokes in series with the motor. The 100 ohm resistor makes the motor go "cooler" and should be if used around 220 ohm at 5,2 volts. Jay Mendoza add this to "his" actuators and have found out improvements there together with a well exercised spring. The main improvement is having the 220 ohm resistor and a smooth set up. The chokes have not any really impact on the issue...
I'm running trials by adding a bidirectional TVP diode across the motor.
Top

I tried a new approach last night and can't get it to "glitch/freeze" at all, even with stiff linkages. I'm still using an Arduino Pro Mini, but have separated the DRV8838 enable and phase (direction) pins. It worked 100% OK with either a single battery for the Arduino and motor or with a separate battery for the motor. I've shamelessly used Phil's diagram and Photoshopped my minor alteration. 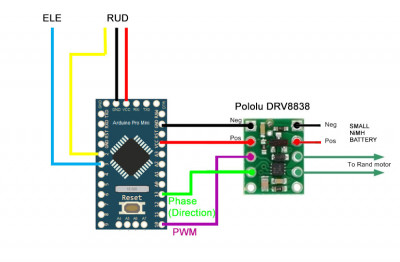 There are other benefits from separating the "enable" and "phase/direction" pins on the DRV8838. The main one is that if you turn the transmitter off, the actuator stops at near centre due to the spring tension, whereas previously it just keeps running. It also took less power which I checked at the end by seeing how much charge I got back into the battery (around 25% less than if no coasting). Also, you could program the Arduino with a "bootloader" and the delay in the Arduino starting is not so critical as the Rand motor is not running. This would be easier for a novice to program, who is more familiar with uploading directly via USB rather than using an ICSP.

I would imagine you could use Martins Pulser program directly and I'll try this out when I get an Arduino ATtiny85.