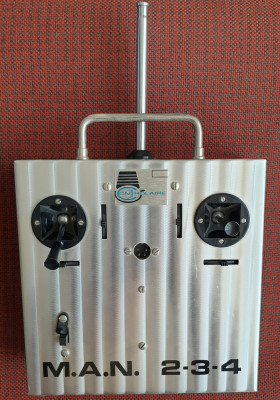 The Controlaire Mule - viewtopic.php?f=24&t=462 - s/c tx uses Martin's "super S/C" encoder with model memories & all sorts of programmable features. It has both a 36MHz FM board and a Frsky module, either being selected by a switch on the top of the case hidden behind the FM antennae. A great trannie to fly with, and looks nice & shiny too

This Tx also looks nice & shiny too, but with plenty of small scratches to give it 'character'

Since the MAN 2-3-4 propo Tx is a basic 4 ch set, it's an ideal candidate for Phil's "high end(?)" Digispark encoder, so that's what its going to get

As the photos show, the Tx is in pretty good nick, still looks nice & shiny too. 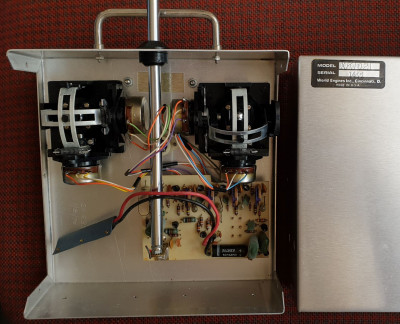 The 2-3-4 has been engraved inside with the serial number and date of 21st January 1970. As a kid, I used to drool over sets like this in Model Airplane News dreaming of what it would be like to have such a set.

I have a Corona Tx module put aside for it as well as (if I can find it amongst my boxes) a 29MHz RF board - these will be switch selectable like in the Mule Tx. The encoder is programmed and the bits have been gathered into one container, but that's as far as I've made it so far - this conversion is not going to be as quick as I would have liked, due to other competing priorities. Unfortunately all my modelling stuff has been pushed a long way down the priority list now that I've actually started construction of our hangar and house. On top of that 'challenge', I've had to return to work part-time to help pay for our new retirement 'digs'. The job involves travelling to New Zealand for a week or two every month, which might sound great, but it's time a long way away from the construction site as well as lost time travelling to/from

But, it is for the best cause

Never seen the MAN 2-3-4 set before. Was it originally kit built or ready to use.

I think you have seen one before, but probably didn't realise you had as the Controlaire MAN 234 was sold in the UK as the RCM&E Propo Mk1 kit.

I've got both the MAN234 and the RCM&E and besides a few component substitutions, they're identical. One of the RCM&E I've got even says Controlaire on it's PCB (sold by World Engines), but I've also got one sold by Horizon (I think), that has RCM&E on the PCB and is in a blue case with MacGregor/Horizon joysticks, but the PCB layouts are identical.

Wayne_H wrote: ↑
04 Nov 2019, 10:32
Unfortunately all my modelling stuff has been pushed a long way down the priority list now that I've actually started construction of our hangar and house.

Is that a hangar for full size or models? And do you have a flying site with the hangar? Either way, it sounds good! Oh to live in a country with all that space.

Based only on the engraved serial number inside the case, the factory type manufacturers plate on the back of the case and the standard of construction / assembly, I believe mine is a "factory built" TX. Unfortunately, I have no history for the TX, it being an "opportunity purchase" from the USofA via the Bay

Is that a hangar for full size or models? And do you have a flying site with the hangar? Either way, it sounds good! Oh to live in a country with all that space.

Thanks for the insight into the RCM&E connection, I had no idea of that branch of the "shiny box" family tree. For every yank magazine I got my hands on as a kid, I must have devoured 10 issues of RCM&E, but I never picked up on the connection.

The hangar is for my sailplane, and up to 3 sailplanes in total (mine + 2 visitors), with the external upstairs 10 x 4m mezzanine for modeling. I'm project managing the construction as well as doing as much of the work as I can, to stretch the available funds. The hangar is behind the house - house accesses the street at the front of the block while the hangar opens onto the taxiway at the rear of the block. The aviation museum is a 10 minute stroll should I get involved with volunteering later on

An aviation nut's retirement dream, >40 years in the planning, and now at last, the making

What glider have you got Wayne?

My favorites were the Blanik L-13 and the Grob Twin Astir. I managed about 10 consecutive loops once in the wave at our gliding club and barely lost any height as it was so strong before I realised it wasn't a great idea with dead spiders and general cockpit detritus going up my nose each time I went inverted.

The Controlaire MAN 234 was initially a kit featured in Model Aircraft News in August 1968. I haven't got the magazine, but there is a link below with all the articles as pdf:

They were advertised as kits, semi kits and pre-built (the advert below is for the single stick version, but electronically it's the same.

The RCM&E Digital appeared in the December 1968 edition. They also published a booklet with all the build articles together, I have them all if anybody wants them scanning. 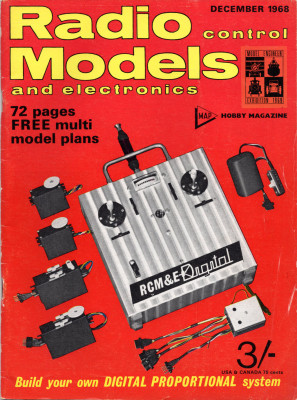 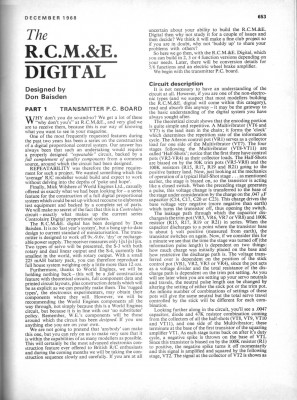 Finally, the only photo of my MAN 234 I have to hand is with my Galloping Ghost set (sorry about the 3D printer in the background). 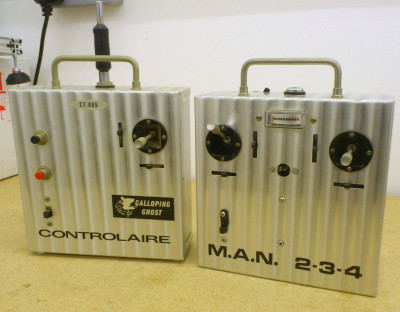 Shaun, I have a DG101 15m - one of the last one's to leave the factory, so it has some commonality with the DG200 (one piece canopy, fixed tailplane, etc). I went solo in a Blanik and have flown all version of the Twin Astir (known out here as the "Concrete Swan"). Learnt on the winch, but the local Temora Club has a Pawnee so now mostly aerotow.
Cheers,