These are all probably good solutions for some special cases, but...

I agree with you if you've got 2x modern Spektrum, it's the easiest solution, that works well. But on a retro/single channel forum many (most?) of us don't have Spektrum sets. Special cases? I think not....

So how does it work if you've got 1x FrSky and 1x FlySky module? Or 1x Jeti and 1x FrSky module? Or 1x Futaba and 1x Orange DSMX module? It doesn't work! Some of us fly non-Spektrum radio's. They may be the most popular in the USA, but locally they don't account for 50% and are losing ground fast to FrSky and Jumper at the bottom end and Jeti at the mid to top end. Oh and I don't have a Spektrum (except the original DX6 that started all of the 2.4GHz off), but fly with Skyleader, Kraft, Graupner Variophon and Min-X with FrSky modules.

These radio combinations are hardly special cases, they are quite normal at our club where the pupil is encouraged to use their own transmitter and the instructor likes to use his own transmitter, not some cheap, Spektrum DX6 just for training.

Actually I do have a Spektrum DX5e set that I've taken the 2.4GHz module out of and used as a donor for an Arduino encoder that connects directly to the Spektrum module and is into flight testing, but that is for another time.

Whichever system you use, there always remains the Instructor's dilemma (model or 1:1 scale) of allowing the student to make, recognise and correct his own mistakes but to intervene before the situation goes beyond the Instructor's ability to return from some remote corner of the Flight Envelope.
Nevertheless, the old "Tranny-Grab" reversion technique is so Nostalgic !
When did Buddy boxes first appear ?
Spike S
(Tune for maximum smoke)
Top

The first UK sets with "buddy box" were the Flight Link Series 2 from around 1967, though the slave was a dedicated "student box" with just joysticks, but no encoder or rf section. The Flight Links were analogue and wouldn't have connected to anything else on the market anyway. I'm certain I've seen some US sets with buddy box around the same era, but I can't remember which sets they were.

You can see the buddy box being used in the 1969 BBC Tomorrows World bit about R/C around 3:05 but it's probably only viewable in the UK.

and a screenshot from the video: 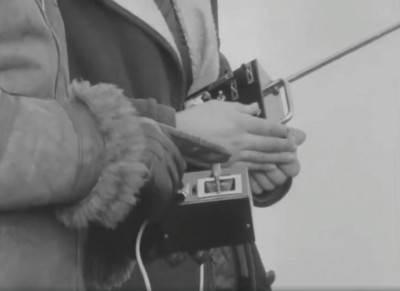 Mike, I was really addressing Jay. He flys in the US and most people around him fly Spektrum. But to the point, all the combinations of radios you list ARE special cases if someone wants to buddy box them. In those cases, like Phil says, its almost easier to go solo for Vintage equipment. Jay only needs one Spektrum radio because he puts DSM modules in many of his conversions.

I'm sorry you appear to dislike Spektrum but the DX6 is not "some cheap" radio. I realize at your club other things are quite normal but in this country, they are about the largest brand of radio in use today and the things you list are not normal.

I enjoy playing with Vintage radios but not exclusively. I fly many other types of models including Turbines, Giant scale, and Helicotpers. I'll stick to my modern computer radios for those. There is room for both. But I'll try to stop posting on your (UK) forum and stick to the US ones. Sorry if I offended you.

I got ripped off by HK over the dual receiver, servo multiplexer boxes - I published mine in November 2009 and in early 2010 HK announced theirs. I knew it was a rip-off but bought one to be sure, and yes, it was. They'd made a nice PCB and a moulded case for it, but otherwise it was a straight copy.

Modern sets are not for me thanks, I did briefly own a Taranis

we're here because we prefer the old stuff, so much so that we will happily put in disproportionate amounts of time to resurrect them and to share the joy

I very much doubt Mike was offended Scott, I think he was just pointing out that this is a retro-radio forum. Please stick around, 'tis the season to be jolly after all!

You guys would really Like Scott, he comes out to our meets and always donates a Kraft or two he has converted a-la PhilG to the raffle. That inspired me to donate a Kraft KPT-5S transmitter to the raffle as well...it's contagious. Both Scott and I had fun demonstrating and flying a Hobie Hawk at the last meet with a PhilG converted Kraft KPT-2/3S transmitter, and people were really amazed....they thought it was very cool and nostalgic to see us using the old equipment. Scott has inspired me to get out more often and expose people to vintage R/C systems. I may have to build a 2 channel sailplane, like the Wanderer, and put a PhilG/GG-Tobe Galloping Ghost system in it for our next Katie Martin at Torrey in June 2020. That would really get peoples attention, especially with all the flapping and the tail bobbing up and down.

Prior to meeting Otto, and then Scott, all my time ws at my work bench fixing old radios..not flying.
Now, I fly all the time, always have a PhilG conversion Tx with me, and people always are interested and ask questions. It is not unusual to have somebody see this stuff and then later show up with an old radio and send me home with it to convert for them. I have actually had to curtail taking on any more due to it becoming popular. Interestingly, we have very few people who do conversions themselves, but plenty of people interested in getting their old radios converted. The nostalgia bug bites hard!
Top


Sorry if I offended you.

No offence taken, I hope I didn't offend you.

I actually really like Spektrum and recommend them to people, but the last Spektrum DX6e I handled felt cheap in comparison to similarly priced FrSky and Jumpers. But the DX8 upwards are great radio's. And I admire their features such as the wireless buddy box, voice alerts, but in particular the ModelMatch.


Scott Todd wrote: ↑
23 Dec 2019, 18:44
Mike, I was really addressing Jay. He flys in the US and most people around him fly Spektrum. But to the point, all the combinations of radios you list ARE special cases if someone wants to buddy box them. In those cases, like Phil says, its almost easier to go solo for Vintage equipment. Jay only needs one Spektrum radio because he puts DSM modules in many of his conversions.

I was only trying to point out that they do not need to be special cases, it is so simple to cater for two different brands being used together. Obviously, if two sets of Spektrum (or 2x Jeti) are available then you'd be stupid not to wireless link them. But in 3 out of 4 situations at the clubs I fly at that isn't the case.


Scott Todd wrote: ↑
23 Dec 2019, 18:44
I enjoy playing with Vintage radios but not exclusively. I fly many other types of models including Turbines, Giant scale, and Helicotpers. I'll stick to my modern computer radios for those. There is room for both. But I'll try to stop posting on your (UK) forum and stick to the US ones.

I too fly many different types, at the weekend I was flying F3A aerobatics and 90mm EDF, but I use my converted vintage transmitters to do so. Why do I use that? Well, my conversions are as capable as earlier generation Spektrums and if I use them for all my flying I will have greater confidence when I eventually sell conversions. I hope I haven't offended you and you stop posting to a UK forum as the cross-fertilization of ideas from different countries is what drives us forward. It shouldn't matter if you are from the USA, the UK, Holland, France, Sweden, Australia or wherever, we all enjoy the same hobby.

Wishing you a Happy Christmas

I do really like Scott! I've been on RCG long enough to know he's a good bloke

...and he always lets me know how his projects are coming along

Here is a question I have.

I fly Mode II, so is it reasonable to expect a learning curve when adapting to a Mode I control layout when going to a Reeduino?

I can for see having to un-learn flying propo Mode II as reeds are basically Mode I.

The issue I'm anticipating is the elevator and rudder being on separate toggles, (mode II propo has them on one stick) and tendency to yank back on the rudder toggle in a turn instead of actuating the elevator toggle.

So sould I try using the reeduino on my simulator first to get used to the control layout?

I fly mode 2 usually, though I do sometimes help mode 1 beginners trim their planes - trainers and similar I can just about cope with on the "wrong" mode.

No problems with reeds though - they're switches rather than analogue sticks and only move in one axis and you have to pulse rather than hold them - so you tend not to get confused.

Hardest thing for me on reeds is controlling the throttle and elevator together for accurate landings. I suspect that's not a mode 2 problem - I think even mode 1 proportional fliers would find it difficult. I try to work the throttle with my index finger and keep my thumb for the elevator. Do you normally mode 1 guys do the same?

I haven't tried aerobatics on reeds beyond basic manoeuvres though - I don't think I could ever manage knife edge on reeds.