Does anyone know of a good plan for the Flying Flea? I have seen a few RC examples of a good size (around 50 inch span +) that seem really stable, but I've yet to come across a good plan. I have a sneaky suspicion that the best flying examples I've seen have been 'own design'

I am flying this version for over 30 years now. It´s a great flying little airplane. The first 20+ years I was using a Hörnlein 1.7 ccm IC engine, then I converted it to electric power. Now it is flying even better. But be advised, no airobatics, especially no loops or rolls. Don´t ask how I know.
https://outerzone.co.uk/plan_details.asp?ID=5678

Sorry Stew (& Frank), please don't be offended, but for me the flea has always been the aeroplane that fell from the top of the ugly tree & hit every branch on the way down

Could be the start of a new thread - what is your fuggly aeroplane??

Now watch it Wayne, there are more Flea aficionados on this forum than just those two......

Oh Wayne - how could you be so rude and cruel about a short, fat, ugly and totally gorgeous little aeroplane? In most respects you're right - it has none of the sleek, aerodynamic chutzpah of many other machines of its era, but surely that's its charm? It's just so off the wall!
Leaving that aside, I thought I'd post a few comments and some photos of my two Pou du Ciel creations, both of which fly extremely well. At 1/8 scale, the little 'un (Old Blue) is 36" w/s. It was built from a magazine plan published some years ago, "designed" by one Colin Reynolds (I think that's his name). In fact, when I came to build the big 'un, I discovered that Mr Reynolds appears to have simply reduced and copied the 1/4-scale plan drawn up by Randy Risley, a US citizen (the plan is on OZ).
The little one flies well but, with its minimal ground clearance and relatively tiny wheels, it really doesn't like ROGs. That means a hand-launch is the only sure and safe way to get it airborne, and that can be tricky too, because the rigging wires are a significant hazard. The other thing to avoid is over-powering the model, and this applies equally to the 1/4-scale version. It's counter-productive, in so far as the model has a built-in headwind and therefore its top speed is predefined, meaning that surplus power is not advantageous. Nevertheless, the little one will loop and roll, if you're brave enough . . . Both my models are electric-powered.
Initially, the big one imposed a long and steep learning curve. On its very first flight, it charged down the strip, hit a small ridge and took off, thereafter flying as sweetly and sedately as you could wish. Subsequent attempts were nevertheless invariably abortive - nothing would persuade the b****r to "slip the surly bonds". After dozens of high-speed charges down the strip, ending in nothing, one day there was a breakthrough. It came as the model was just about to over-run the end of the strip, whereupon I throttled back and, lo and behold, it took off. Withough power, the ensuing hop into the ploughed field was brief but it set me thinking: what had caused the transition from earthbound to soaring gracefulness? The groundspeed had certainly always been sufficient to generate enough lift for T/O.
The conclusion was that it was that dreaded "slot" effect between the forward and rear wings that was responsible. The propwash is partly directed through a relatively small gap between the t/e of the front wing and the l/e of the rear wing, effectively creating a "blown slot" effect over the top surface of the latter. This increases its lift significantly, to the extent that it exceeds the lift generated by the former. This means the nose of the model was being pushed down all the time, preventing takeoff.
Increasing the motor's upthrust, re-setting the incidence range of the front wing and carefully adjusting the Balance Point to 40% of the root chord of the top wing soon had the model flying reliably. Reading around the subject, it's clear that a more rearward BP would be extremely dodgy!
I used the scale undercambered and reflexed wing section as drawn by Risley although, purely for my own amusement, I modified the front end to that of Henri Mignet's original. The only other mod was to install a simple single-axis gyro on the rudder, to prevent any squirrelly antics on take off.
So Stew, if you haven't already made a decision as to which version of the Flea to build, I'd recommend Randy Risley's 1/4-scale which comes out to a very substantial 60-odd inches w/s. It's a lot of model (c.8.5lbs) and has huge presence in the air. Power loading needs to be itro 70 WPP or IC equivalent if you go that route. 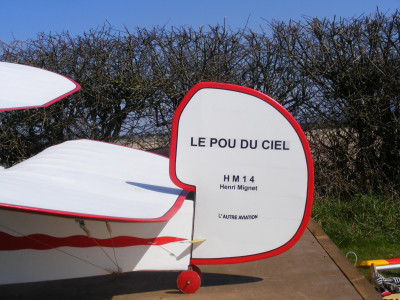 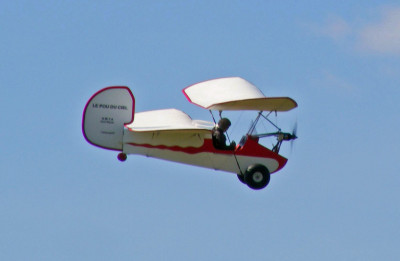 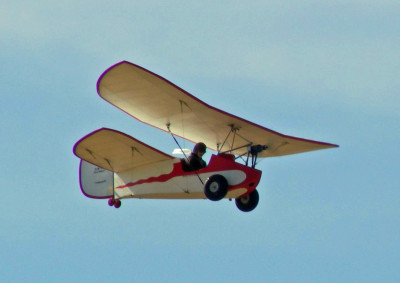 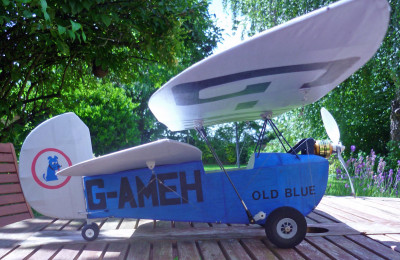 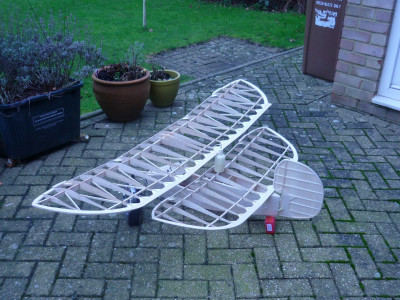 Sorry all, it must be the bushfire smoke & weeks of 40+C heat that made me do it

To each his own - I guess if you've been bitten by the Flea, ya just gotta scratch it

When things are so ugly that they became gracious!
Top

Twitcher, the red one wasn't flown at Cocklebarrow was it? (lovely by the way).
Top

That's the one Stew. About two or three years ago.

One of my absolute favourites. I built a HM14 from the Randy Wrisley plan many years ago (https://outerzone.co.uk/plan_details.asp?ID=6407). Unfortunately, I discovered that I had built in an amount of "wrong" washout in the tips of the forward wing, and sealed it by silver spraying the covering fabric (Coverite iirc). Nevertheless it flew, but my flying skills then were not "fully developed" shall we say. That was in the '70's. After that, I dragged it from Holland to New Zealand, overturned it on the first take off there, and it is still lying damaged on a shelf today (back in Holland).
The next one was the "French Poodle", which only had a very remote likeness with a Pou, but flew well.
After that, I decided to design a scale model of the HM16. That was a real nice flyer. It is still available as a kit from RBCkits: https://www.rbckits.com/shop/pou-du-ciel.html 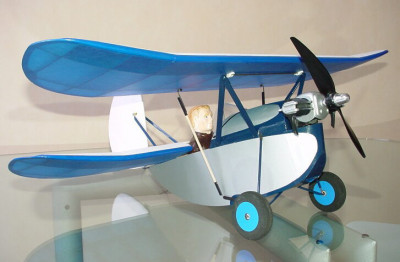 Recently, I decided to go to a larger size, so I did a complete redesign of my smaller HM16. I have built it, and it flies well, but getting it in the air is a pain. Taking off is no problem, but keeping it on course while rolling is! It will swing to the left (mostly) at the slightest hint, and taking off is more luck than anything else. I tried moving the wheels backward, adding toe-in to them, moving the CoG forward, all to no avail. I built in a gyro to control the rudder, if only during take off, and the first trials show some progress, but the wet condition of our field has prevented further trials up to now. 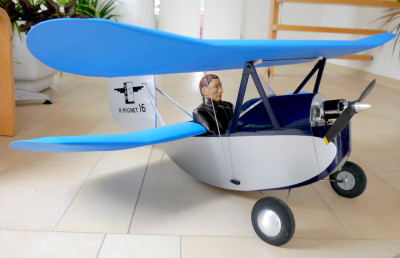 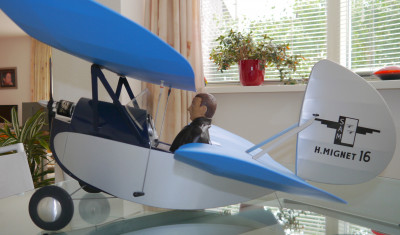