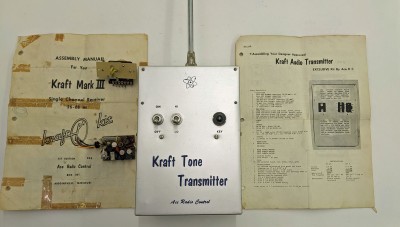 I'm lucky to have most Kraft transmitter models in my collection, including a couple of Kraft s/c sets, the Ecktronics Kraft Tone Transmitter and a gold anodised Kraft Custom s/c, but I've now managed to get an Kraft Tone set, sold as a kit by Ace Radio Control, complete with Rx and assembly instructions. The first thing that surprised me was its size but then I realised this was required as it's a valve set (vacuum tube set for our American friends) powered by two 67.5V batteries and the 1.5V heater battery takes up most of the space in the case. As a size comparison, I took a photo with it next to a Kraft KP-4B. 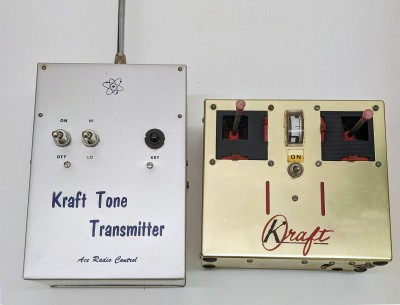 It's been very neatly built for a kit, in fact, neater than the Ecktronics Kraft Tone Transmitter which was commercially pre-assembled. 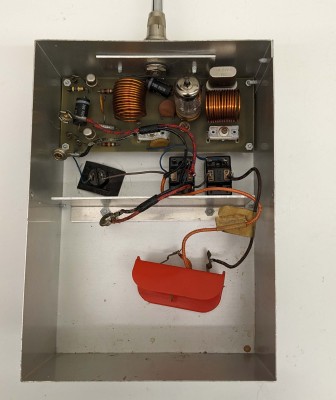 There's nothing stopping me from trying to see if this still works, but I guess the electrolytic capacitors have probably dried out and need replacing. Hopefully, everything else will be OK, but that's probably wishful thinking! The transmitter has a fairly standard 3A5 in the rf section and a pair of 2N224 germanium transistors for the tone oscillator, which I think I have spares for if they are faulty. The receiver has a small wire-ended 6007 valve/vacuum tube in the rf detector stage that I'm not so familiar with and have no spares for, but I've checked on ebay.com and new-old-stock ones do occasionally come up for sale, so I'll bid on the next one I see. It also has two 2N1370 in the amplifier stage and another to switch the relay, all pretty standard.

I'm not certain when this one was built, they were first featured in Grid Leaks, in May 1961, so is a contemporary of sets such as the British ED SPI, ED Black Prince and REP Reptone or German Metz and featured along with the Kraft 10 channel reed set kit (also by Ace) in Grid Leaks. A nice set for the collection and will probably go on display at BMFA Buckminster later this year in the place of one of the s/c sets I have on display there at the moment.
Top

For the uninitiated "youngsters"(?) amongst us, what did a tx such as this weigh when stuffed with batteries and ready to go? It looks like you would end up at the end of the flying season with arms like Popeye 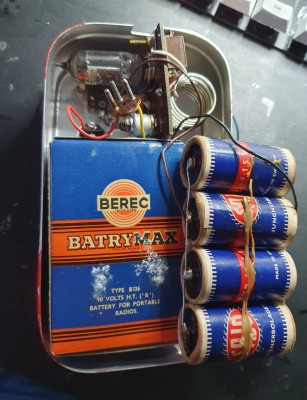 It was only a few years later when really small and light weight Tx appeared on the market, such as the OS Pixie and Futaba FT-3A, you realise the rapid rate of progress in the 60s
Top
Post Reply
4 posts • Page 1 of 1