Hi Ron
I'm trying to build one of Martin s single channel Tx.
I need help with schematics and build instructions.
The pdf files on the site concerning the schematics and description appear to be corrupted and will not open.
Is there any help you can offer. I have tried Martin but had no responce on another subject.
I also need to know the component values associated with the LCD.
Regards
Clive
Top

I finally managed to get one built 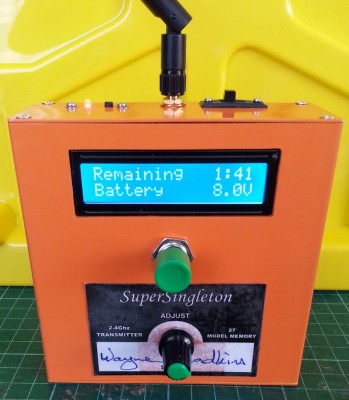 Mine is housed in an aluminium extruded box (China via Ebay). In a rush of blood to the head, I decided to paint the box - According to the label on the spray can, it should have worked, but despite a thorough clean & degrease before painting, the paint is already chipping off

I'll probably end up stripping it off, apply an etch primer and then repaint. I'll fix the label up then too 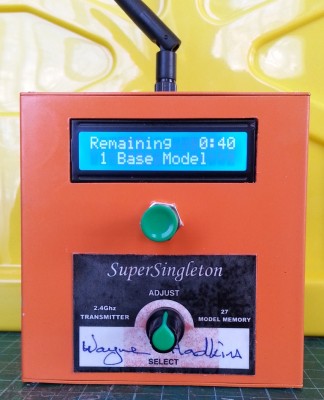 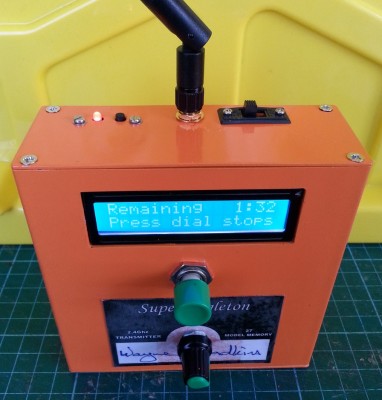 So far, I've only loaded 3 or 4 models into memory. I want to fly it before doing much more so that I can get a good 'feel' for the settings and their effects 'in the air'.

Regardless of the paint, I'm very happy with the project and features offered by Martin's encoder - thanks Martin!!
Cheers,

The (orange) Tx in my previous post actually used the second encoder I'd made. The first one was not successful, having a frustrating intermittent fault. The fault had nothing to do with Martin's terrific project and everything to do with me hand drawing the tracks onto the copper before etching - ended up with lots of fine cracks in the tracks.

So, rather than waste further time trying to fix it, I better utilised my inventory stock and created a layout based on Phil's pcb, that I could knock up on "proto-board" (the stuff that looks like Vero board but has a small solder pad for each hole rather than copper strips). This one actually worked (almost) first go. For some reason everything except the buzzer worked - I double checked everything & even replaced the buzzer without success. When I joined both ground pins on the arduino, the problem was solved (I thought they were connected inside the arduino). Anyone else encountered this?

This encoder is mounted in a (new in box) Mule S/C TX that I assembled from an original kit at least 10 years ago. I've posted more details in a separate thread. Anybody want an original complete and unused Mule MKII board on 27.195 (minus the push button & power switch)? 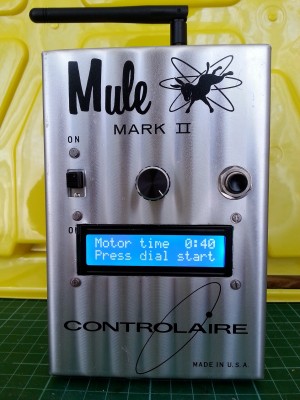 Also, as for the PPM/PWM tester/analyser, I have PDF's of all the original pages for Martin's encoder saved off the old forum - from memory it's about 20 files, but there are a number of "nuggets" in them if you are considering making one of these great Txs. If it's of use, I can post them here.

I’m also working on this TX for me and my sons.
I saw on this forum fishing stick TX and designed one. I wanted to use JR style modules and smaller OLED 128x32 ( my friend is modifying original code) will also design small PCB for oled or normal 2x16 LCD.
Hope to finish it soon. This is my first TX build.
I’m also thinking to use ammo box for second TX.