I'm finally pulling my finger out & putting together my Tiny 6.
I can get some simple momentary switches but they are a bit short & would quickly become uncomfortable.
Does anyone have any suggestions for decent switches?
Thanks.

Guitar pickup switches Al !
The short-style ones fit into a shallow case, the longer style feel nicer but need quite a deep case.
I have the 'square' mini-toggles on my own Tiny-6 (the prototype) and in use they do get uncomfortable.
You can get coloured coloured plastic sleeves for them (the model railway enthusiasts use them to identify points switches) but they dont look that good.
Cheers
Phil 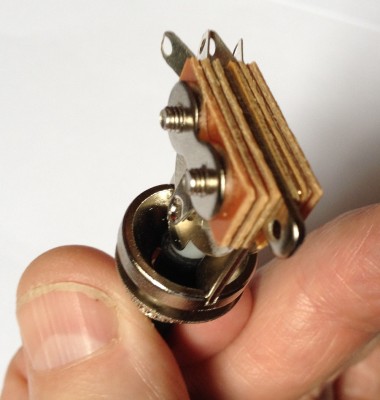 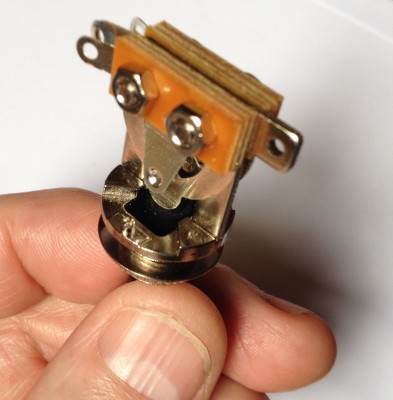 Two pictures of my modified guitar switches, both types differs in their nuts (and slightly some other details).
To prevent blocking during operating, I reduced the travel of the stick by sliding a short piece (4-5mm) of an RGU-58 cable rubber outercoat over the central serverpin.
As far as possible, but keep the end of the serverpin (contact with the moving contactstrip) sufficient free.
Even a second coat can be applied.
The outer end of the moving contactstrip is straigthened / flatened.
In the bottom picture the switchtype with the (removed) PVC position lock-disk, and allas nearly visible, a black serverpin, but same modification.
Not critical anymore and a safe operation !
Histone

Heres a 'disassembly' photo I took a while back, click to enlarge.
This is a 'before' shot, we simply swap the t-shape and the D-shape so the D is against the toggle. The t shape is adjusted to contact nicely at about half throw.

Could someone please measure the depth of these switches from the mounting to the back of the unit (the bit that sits inside the radio)?
I've got cheap switches in mine but they aren't particularly nice to use for more than a few minutes at a time.
II'll convert if these will fit.
Thanks.

23.5mm on the "short" variety I obtained.
However, if you are using a metal enclosure, the edge of the leaves are exposed so add a little space for insulation or an air gap
Spike S

Thanks mate.
It'll be close but I think they'll fit.

There some 'horizontal' versions of the toggles which are very compact in depth, but they're quite long across-ways which makes it awkward to group a few closely, if you see what I mean.
Cheers
Phil

These are genuine 'Switchcraft' toggles though, not guitar switches. The long ones are really long which is why Orbit reed trannies were so deep! 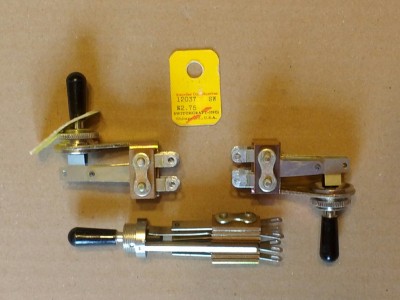 I've just ordered some short ones to try in my Ron special.
The Impala will be done in time for this years slope festival so hopefully these will arrive in time.

What is the size of the Orbit or RCS 10 channel reed transmitters? Also what is the position of the switches approximately? 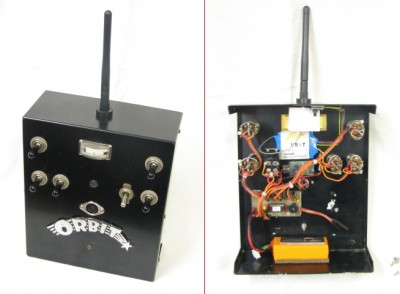 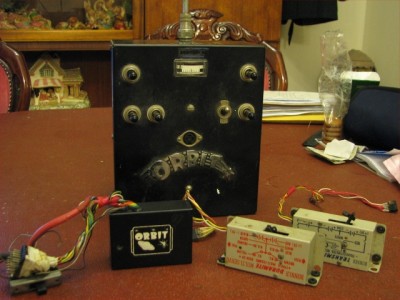 Thanks Phil, I am now starting to make a 10 channel set with Martin.it should use anArduino with a rotary encoder and a tiny OLED display. The guitar switches have been modified and feel good, later in the autumn I hope to build a 70% Uplift.

What size photos can be used, I still get restricted to the lowest resolution my tablet can take? 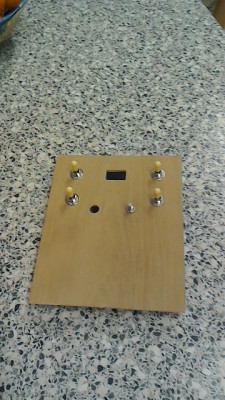 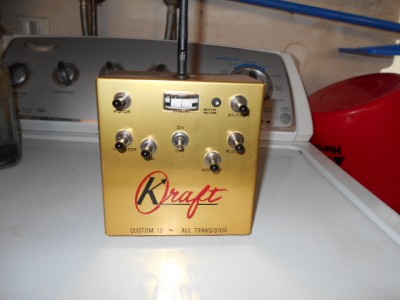 Here is a Kraft Custom 12 converted with a Phil_G reed emulator. We added some circuitry ( zener diode, 2 resistors) to drive the meter so it would read battery voltage, essentially making it an ESV. The old battery test button hole to the right of the meter was used to hold the status LED off the encoder such that one can do programming and settings without having to remove the rear cover. It works flawlessly , of course! 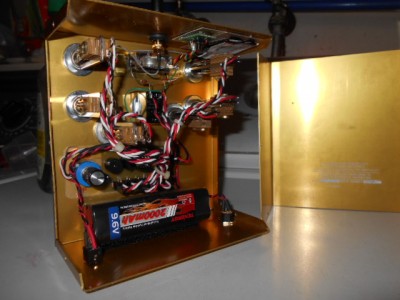 John I've just got a guitar toggle (just one, my fault, mis-read "3 way toggle" for "three toggles") and I've straightenend out the plates, rearranged them into "reeds" order but at full throw it sticks - I was wondering do you bevel the lever at all where it pushes on the spring contact? 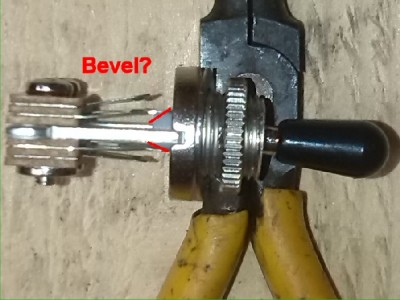 Hi Phil
I bevel my switches where you have marked them, I got this tip from PaulJ, it also helps to remove a bit of slop around neutral.

Brilliant thanks Glyn
I was just thinking I should ask before I permanently file it away....

Hi Phil,
On mine I just pulled the tube a little lower on the operating lever that cured it.
John. 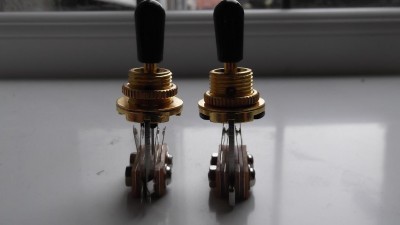 Ah I didnt realise you could do that John!
I've ordered 3 more, that first one was my mistake, same switch but it was a combination of being three times the price, plus I misread the description thinking it was a pack of 3. So I paid £7 for one switch! Just ordered 3 more from another supplier, £2 each & free p&p.
Got a lovely new die-cast case from CPC, having seen René's C&S 10, I'm going to try to replicate this: 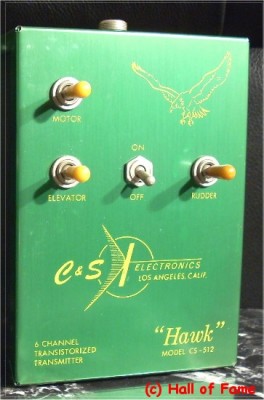 On ebay at the moments are some genuine "switchcraft" momentary contact versions (i.e. no bending or changing or contact order necessary) - price seems reasonable as the genuine switcraft units often are sold for about $20 each:

That looks nice Phil I also like the green reed transmitter in Franks post from Germany.
John.

Followed Glyn's advice, filed a small bevel just like in the photo above - perfect!
Thanks chaps
Phil
www.singlechannel.co.uk
Top

Can you help me wire it up?

left switch = one closed, one open
middle = both closed
right = one open , one closed


Can this be done? - I'm struggling - having middle position puts resistors in parallel so middle posn is lowest value rathe than a medium value

I'm working it out on paper so could be getting it wrong - vaguely think I understand the maths - in series is just adding up resistance , in parallel is 1/r = (1/r + 1/r) - ie a lower value


I have rigged up my guitar switch to have the middle position = both contacts open, left = one contact closed, right = other contact closed

Penny has finally dropped that I need

Can I do this with my guitar switch?

It's not exactly like moving a wiper on a pot, because the impedance 'looking into' the signal will change differently, and the impedance across the whole 'pot' top to bottom will change when the switch is moved. But most encoding circuits are not sensitive to such impedance changes, so a resistor chain with the two momentary contacts of the switch shorting out one or other resistor in the chain should do what you want. See the attached sketch and adjust the resistor values to give the throw you want. 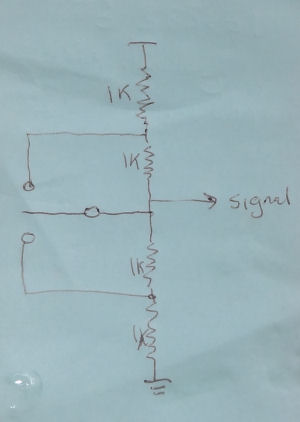 The earth at the bottom of the chain in my drawing may not actually be earth - older transmitters tended to have dual rail, positive-negative supplies, so that the signal ended up around 0v when the pot/switch was at centre.
Top

Your expertise much appreciated

I have made two boxes

I'll see which I prefer on the day


Out of interest this is what I was going to try - would it have worked? 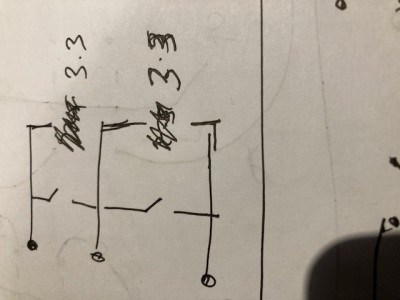 Yes, I think so - providing whatever the 'signal' from the switches connects to doesn't mind being joined directly to one of the supply (to the 'pot') rails. The version I posted with the four resistors more closely simulates what a normal stick pot would do. The sticks don't normally travel right to the ends of the pot tracks so there is always some resistance on both sides of the signal.

If you still have the original pots, and stick units, you could temporarily put, say, 5V across the two outer pins of the pot, and measure the voltage with a voltmeter from ground to the wiper when you move the stick over its full range. You'd expect it to be about 2.5V in the middle, but if it only swings from, say, 1.25V up to 3.75V with full movement, then you know it's only using roughly half of the full pot travel. Then the diagram I posted with four equal resistors would be closer to simulating that full movement range using the guitar switch.

If you want to get fancy, you could use three trim pots wired to the guitar switches instead of fixed resistors: then, by tweaking the pots, you'd have individual control over 'left position', 'right position', plus a 'centre trim' adjust!