The latest version of Encoder Board

The latest version of Encoder Board 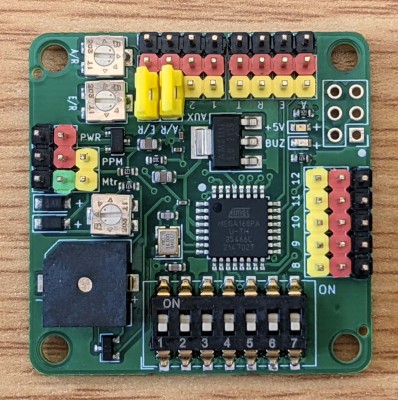 
Every time I go to order some more small encoder boards from the PCB manufacturer, it seems as if I fire KiCAD up first to see if I can improve on the previous version. I'd seen Tobe put smd pots onboard on his nRF24L01+ encoders and thought this was a great idea, but to fit them on this board I had to make all components smd (except the headers). You can still connect externally mounted rates/expo pots if you prefer by removing the 0.1" jumper links. 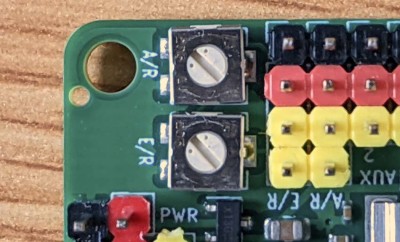 0.1" headers removed if you want to connect external rates/expo pots


It's still the same size as a DM Moore Pro Mini Strong (40mm x 40mm), but you now don't need any external components like the sounder/transistor, rates/expo pots, pot and zener diode for the meter or the DIP switch. I've tested it with Phil's original 7-channel encoder firmware and the 8-channel "F3A" modified version and I'm really pleased with how it all worked out. The other thing I've done is used an ATmega168P-AU in the place of the more normal ATmega328P-AU, there is no downside as the program uses only around 5K of flash, so would happily fit in the atmega88P-AU as well. The reason was purely on costs as JLCPCB (who make the boards for me) charge $32, yes £26.36 for a 328P and a (slightly) more reasonable $3.21 for the 168P (pre-pandemic they charged just over $1 for a 328P).

All the component costs have increased as have the shipping and I got caught for VAT and handling charges, so the finished cost will be around £35 each. Once I've soldered all the headers and then programmed and tested them, I'll be selling them on eBay with either Phil's firmware or the modified F3A version.

The one downside is the sounders come without the sticky "cover" and when I started testing the sounder nearly deafened me, they're just as loud as the thro' hole sounder we normally use and I had to put a piece of sticky tape over the sounder hole to stop me having a headache.
Top

Very nice Mike, I’ve a couple of your previous boards to finish using , will have to give this one a go as well , although atm, workshop is far to hot to do anything in

Mike,
Beautifully designed!
How would I go about getting one here in the USA?
John H.
John H.
"Here's another fine mess you've gotten me into."
Top

I would be interested in a couple to the west coast USA if possible?

Nice design!
I am a bit puzzled though by the A/R and E/R markings near the pots, presumably these are the rates pot and expo pot...?

Nice design!
I am a bit puzzled though by the A/R and E/R markings near the pots, presumably these are the rates pot and expo pot...?

I've done a modified version of Phil's original encoder firmware which I've generically named the "F3A encoder" as I think it's more suited to F3A aerobatic models than Phil's original. It has left and right aileron channels (so it is now 8 channels) and you can set aileron differential via the DIP switches. It also has a modified way for how the rates/expo works, it uses one pot to set the rates/expo for the ailerons and the other pot sets the rates/expo for the elevator - hence A/R (aileron rates/expo adjustment) and E/R (elevator rates/expo adjustment). To make space for the aileron differential and the rates/expo switches (that now connect directly to the circuit board), there is no room for the single-channel emulation, which has been deleted. For details of the "F3A encoder" see the below link:

If the board is used with Phil's original 7-channel encoder, then one pot sets the rates for the aileron and elevator channels and the other pot sets the expo for the aileron and elevator channels. I had to choose the legend/markings to suit one or the other encoder and since I won't be using Phil's original encoder firmware, I went with the A/R and E/R descriptions. I'm in the process of writing a short manual/guide for the board and I'll make it clear what the pots are for in the guide.