Just finished this 1980's kit I bought at Old Warden last year. Another kit bites the dust..
Designed by Mike Trew this was the quick build version... Glass fus, foam wings 54" span BUT..
40 year old veneered foam wings don't play nice.. The veneer had shrunk leaving a number of gaps and the edges were letting go where the glue had dried out, so not so quick build after fixing this. It took quite a few hours extra.

If you fancy one the trad balsa/ply built version will be in RCM&E in the near future as a free plan. Sarik have various pre cut versions if you don't fancy the getting the knife out. My mate Rob built the Sarik one and it is an epic sloper. 10-50 mph without any ballast and very aerobatic but floats like a thermal soarer in light winds due to the 7.4 ozs / sq ft wing loading. 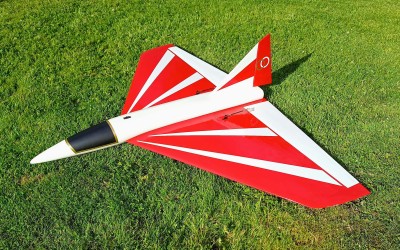 It looks neater with elevons than the original did, with its separate elevator and ailerons.
Top

Martin wrote: ↑19 Jun 2022, 21:25 It looks neater with elevons than the original did, with its separate elevator and ailerons.

Yes I agree....
The reason the original had separate controls was Mike Trew didn't like the response and throws and slop introduced with a mechanical mixer. Also it was to reduce drag as only the elevator had reflex. The ailerons were in line with the wing at neutral.
Top

I had one many years ago, apparently when ordering the kits someone put the decimal point in the wrong place and my local model shop was selling them off dirt cheap!
Top
Post Reply
5 posts • Page 1 of 1