I think you'd be better with one of these, a flying banjo 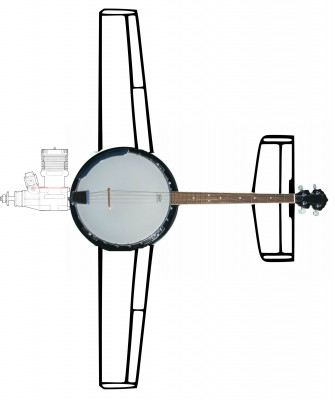 At least it's got a glow motor up front...
Top

You've got it Mike. Only issue is my mate who cuts the Vinyls for me has shut his business ATM
so I can't decorate it up in my usual style. 1st world problems eh!
Top

Could I recommend this little "Gizmo" for those of who haven't built one yet especially if following this project.
viewtopic.php?f=9&t=17&p=18&hilit=scanner#p18
Just don't forget to define the type of oled display used under SSD1X06.h
SSD1106 or SSD1306
Top

Must admit that I haven't had this much fun with the pants on for long time and not least as this project has brought back a lot of memories from the time I flew basically only home-built radios...more or less successful.
I'm aware I haven't been following completely the instructions from Phil bu I took what I had home to play with so just take it for what it's till I get the proper 3,3 volt Nano board . Give me a few day more and I will have this flying with one of my actuators, a full home-built set! 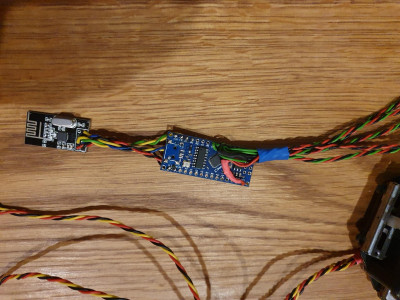 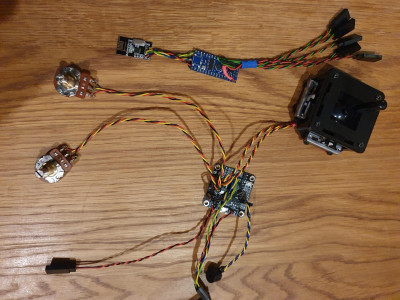 My suggestion for a servo lead/connector from the Rx. Most of us have plenty to spare pin heads but not as many servo leads! As a bonus you save 6 wires, 3 + and 3 - ( each bundle is of 4 wires, total 8 against 14 wires)
I'm a firm believer in twisted wires. RF-Nano
Ready-made receivers! I was hesitant at first thinking they were CH340G powered but yay they have a proper LP2985-33 regulator for the NRF. The full rundown is here: https://github.com/emakefun/emakefun-na ... er/RF-Nano
The only change I can see is they have CE & CSN (D9 & D10) reversed wrt our sketch. The receiver will be slightly larger, but much easier with no NRF wiring to do! We just tried an experiment. In the software we set one of the NRF24 transmitters to absolute minimum power, and fitted one of the tiny 'built-in aerial' boards - so it was as low an ERP as you can get. Then Dave drove the Schumacher car chassis around "bollards" which were actually eight switched-on transmitters - three Frsky ACCST conversions (Sprengbrook, Horizon and Kraft) , two Futaba FASST (daves 6EXA and my 7C) The Logictrol Flysky conversion, the Waltron (OrangeRx DSM2) and a DX5e, all switched on and on full power. Dave ran a battery flat weaving between these hazards with not a hiccup from the radio. The only difference we noticed was that as you'd expect, it hops more often in a busy band. I'm really impressed for such a cheap RF board!

Thats a great idea Tobe, very tidy - but you can save one more wire - D8 is held low as a convenient 'link' ground for the failsafe input on D7 - you already have negative on the block so the failsafe can be one wire not two! Thinking about it, in the receiver I will move failsafe from D7 to D8, leaving D6 & D7 free for two more channels in a neat row. In this case only D8 needs to go to your 'distribution block' . I do like your idea though, I'll do my next rx your way

Meanwhile, I just made another Promini receiver, this one is just 2 channels for Roo's model car. Took some pics this time: 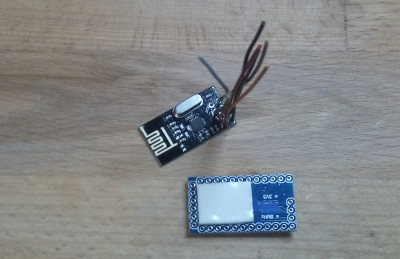 flyleads soldered to the NRF24, DST at the ready NRF24 mounted with 2 layers of DST on the back of the ProMini.
Aerial overhangs a few mm to avoid masking 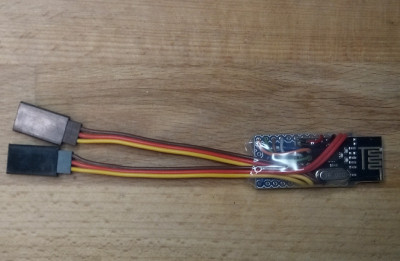 ... and some clear heatshrink 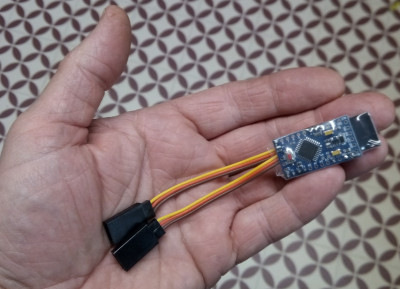 The result is quite a small 2ch receiver. Cost about £4 all in. 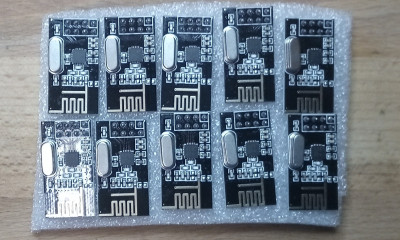 Eleven quid for all these incl delivery, UK seller
I do wish they wouldnt solder headers though, fiddly to remove

Resurrected an old Schumacher chassis - excuse Daves driving as he had the throttle & steeriing on one stick!

I find Martins scanner is an essential tool for playing with RF modules and generally checking if stuff works.
Tobes post just prompted me to make another one, just to pass 15 minutes, works great, just fits nicely into a tic-tac mints case (minus the battery unforch): 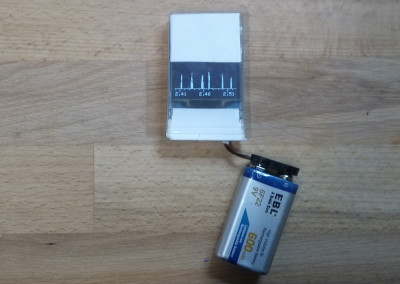 Showing the six hopping channels of the NRF24 R/C project....

The old ebay red boards make the transmitter easy Tobe as they have a 3v3 regulator, the other easy option is the NRF converters you mentioned earlier... for the receivers the 3v3 8mhz prominis are easiest and keeps it compact... but like you I just use whatever I have to hand... like 45 year old displays

Tell me all about it

After almost destroying one, I figured out the best way is to gently pry off the plastic of the connector with a small screwdriver. Gently start on one side, then the opposite side. It is usually not too difficult.
Then it is just a simple matter of heating one pin at a time and pulling it out.

We all use the same method of removing the headers. Found also out by try and error.
Top

Thank you Phil for sharing your new project with us. it keeps us busy and entertained in difficult times like this.
It is great to have something usefull to do and keep our mind sharp.

Cheers Frank, last night I converted Roo's old 27mhz pistol set for his car racing.
Maybe because its an unfamiliar layout, but it was quite a messy conversion!
I had to keep the original boards since all the pots and switches were mounted on them.
Because it has reverse, all the throttle lock, failsafe etc had to be changed, once I switched off
the tx and it failsafed and shot off the bench onto the floor, across the floor and hit one of my
shiney guitars

It has separate trim pots for steering and throttle, so I repurposed the throttle trim as steering rates.
I used a Nano in the 'handle', the NRF module is sideways on held with hot glue, and its for now
its powered by an EBL lithium PP3.

Roo has been razzing it around the yard this morning, he's really pleased with it! 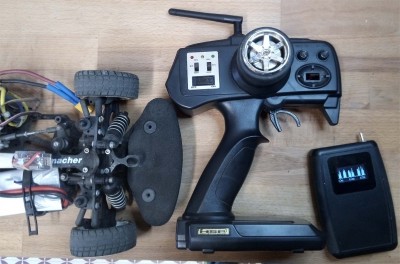 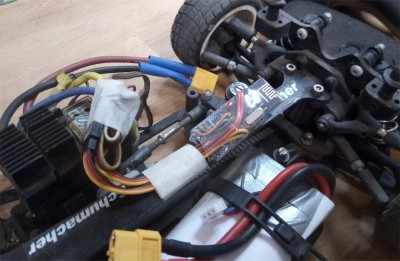 2-channel version of the receiver 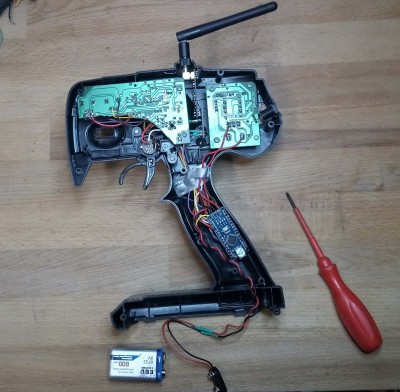 Inside - had to keep the old boards 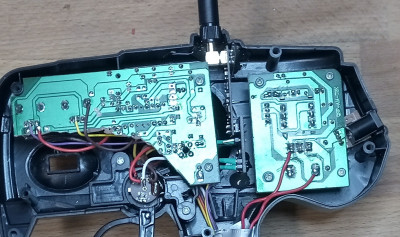 NRF+PA with 5v converter, edgewise on

Edit: Pah, we burnt the ESC out.
Thinking of making a combined receiver and speed controller in one unit... I've a few 400A fets...

WernerL wrote: ↑17 Apr 2020, 03:21I figured out the best way is to gently pry off the plastic of the connector with a small screwdriver. Gently start on one side, then the opposite side. It is usually not too difficult. Then it is just a simple matter of heating one pin at a time and pulling it out.

Thats exactly my method too Werner, remove the plastic in one piece, then remove each pin one at a time, then finally clean up the holes whilst burning your lips