For Christmas, my son gave me a Lark Mk2 kit that he found on Ebay! The seller had started construction, but not got very far before abandoning it. I decided to convert it to electric, as I've already got two i/c powered Larks.

Martin Briggs and Martin Kaye had already done some work on this and sent me some CAD files. I'm fortunate in having an old friend with a CNC milling machine and a lathe, and he knocked me up an adapted chassis plate and motor mount: 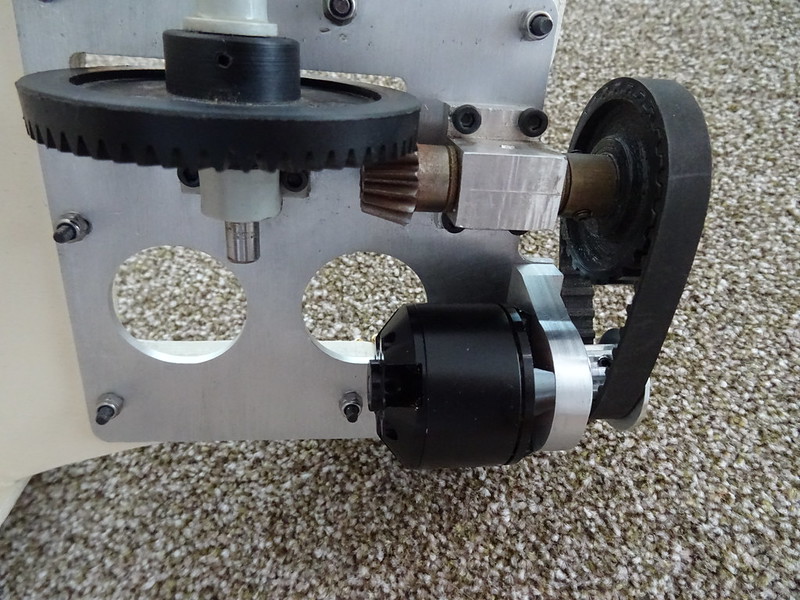 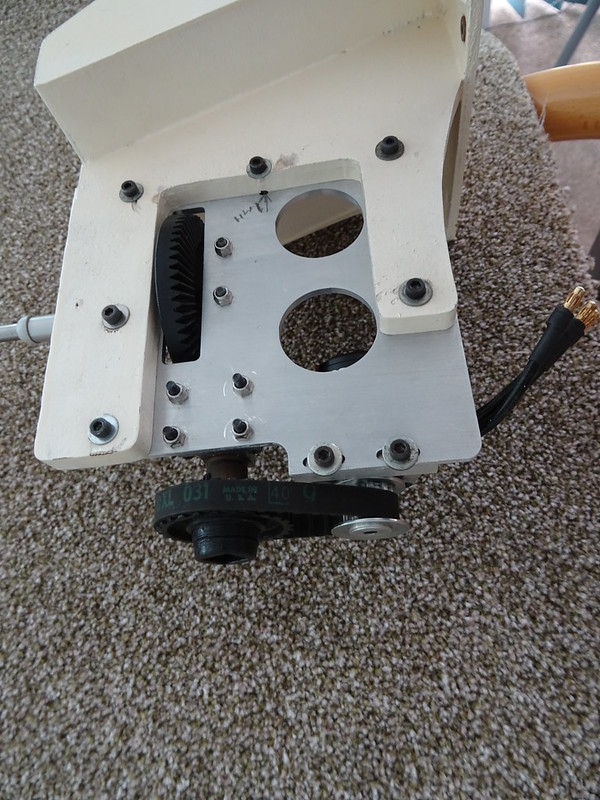 Construction of the rest of the heli took longer than expected, as the previous owner had made a number of mistakes in construction, which I had to rectify before I could continue with assembly. However, a week ago it was ready for some tentative hops to see if I had the gearing right or not:


This was on a 3S pack, and was pretty marginal, but at least I was in the ball park. Unfortunately, the ESC I had intended to use died without warning before I even had chance to fit the rotor blades! It had only been powered up to set up the radio gear and make sure the motor direction was correct, and then it just stopped working!

I had an old spare kicking around, but it was limited to 3S, so I couldn't try it with more power.

I ordered a new ESC (different brand!) and a new pulley to raise the gearing. These arrived a couple of days ago, and were promptly fitted! I also made a proper battery tray, as the original method didn't seem secure enough to me: 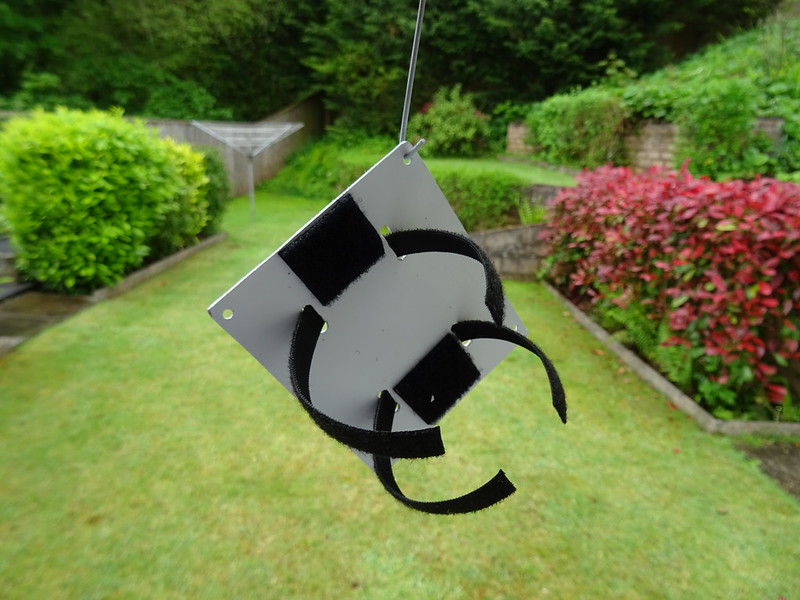 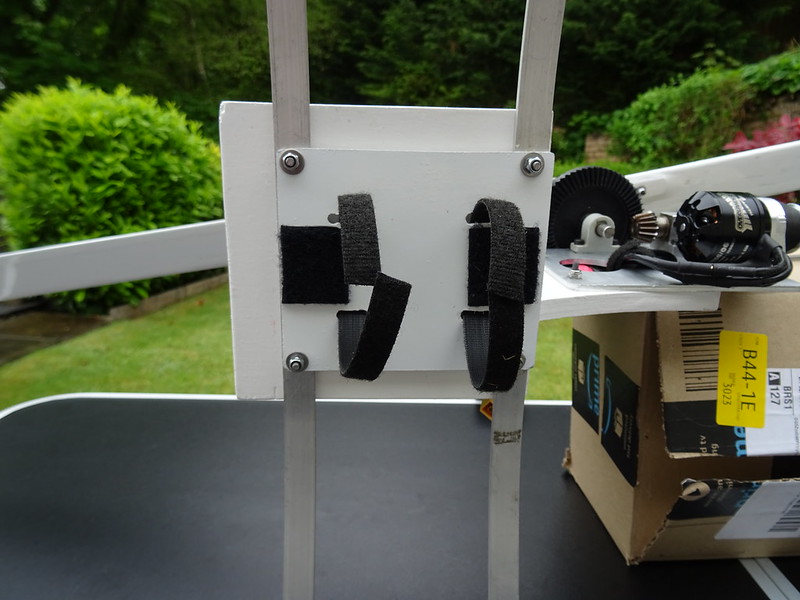 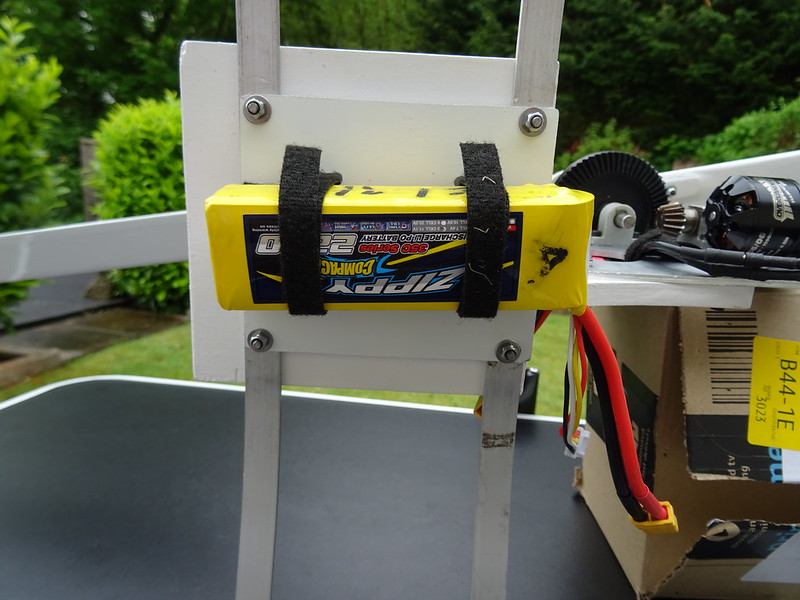 I also replaced the paddles that came with the kit with ones from a much earlier Lark. The ones that came with the model were mismatched by over 2 Gms, and even after balancing caused quite a bit of vibration. The older ones were matched to better than 0.01 Gms, and run perfectly smoothly!

Today I test hopped it in the garden between showers. No video as I didn't want to get the camera wet, but on 4S it was airborne at less than half throttle, and running MUCH smoother!

I haven't let it get out of ground effect yet, as there isn't much space in the garden! It is also quite tricky to hold a heli in the hover until it has been properly trimmed - which requires being out of ground effect! Also, I've had the motor cut once, and hiccup a second time, for reasons that are unclear at the moment. Not sure if its a receiver issue or an ESC problem, like I had with the Cobra, so I'm being very cautious for the moment.

Anyway, its keeping me occupied during the lockdown! Next up is to electrify my DS-22.....!

More test hops! Still need to make some minor tweaks to the heli, but the biggest problem is what appears to be glitching in the speed controller! None of the other controls are affected. Maybe I need to retard the motor timing slightly? Its at the default setting at present (18 degrees), but that may be a bit much for a high inertia system.

Phil_G wrote: ↑04 May 2020, 15:44 Looking good Pete
I dont know anything about helis but from the audio it does sound like the throttle channel itself is wandering - maybe try a servo on a Y lead with the ESC, with a bright extended arm that you can see?

Bear in mind that this is a fixed pitch heli, so the throttle is the only height control, and you do need to be a bit aggressive with it due to the inertia of the rotor system. I think the "throttle wandering" you are referring to is just me flying it!

I'm more worried about the occasions when it suddenly surges - almost as if the belt has skipped a tooth - but I can't find anything wrong with the transmission.

I've got a programmer for the speed controller, so I may try retarding the timing.

Found the problem! It was hitting the current limiter!

Although it was OK at full throttle pegged down, as soon as you applied any cyclic or tail-rotor control, it pushed it very close to the 30A limit!

All I need to do now is bend the undercarriage a bit to give the battery better clearance, and sort out a slightly sticky tail-rotor linkage....

Success! Finally got it flying properly!

I went back to my original 10t pulley, and fitted an original solid head to replace the teetering one. I never did like the teetering heads, and control is MUCH better with the solid one!

The glitching has gone, and there is still plenty of power. All I need now is for the lockdown to end....!

Managed to get up to the field today, and give the Lark-E a proper airing!

On the second flight (not recorded) I pushed it a bit harder, doing some large, lazy 8's. The gyro gain is too high, as its very unresponsive on the tail, and a bit waggy!

Much easier to fly on electric, though!

Having already replaced the teetering rotorhead, I decided to do the same with the tail-rotor. The result is a much improved tail response!

Basically, I've now removed all the "upgrades" MicroMold added during its lifetime, and taken it back to Peter Valentine's original design. It now flies much better!

I think I can now call this project complete!

While I was up testing the DS-22 yesterday, I also gave the Lark a wringing out:

I'm very happy with it now!

Really enjoyed reading about that and watching the videos. I know squat about helicopters, but they're fascinating machines. I remember a chap had a little autogyro at Ponty once, brilliant to watch.
Like all older models, it seems that even vintage helis have a bit more 'soul' about them compared to modern gear.
Top
Post Reply
9 posts • Page 1 of 1