Shout here if you need any help!
Maybe you need a plan - just shout
Post Reply
10 posts • Page 1 of 1

My LiPo charger has packed up

It has both Mains and 12V on the supply side and it still works using the 12V input but the Mains supply side has failed. There is no fuse and no obvious sign of any overheating but after that I'm afraid I'm not clever enough to find what's wrong......... Can anyone here make any suggestions other than "Buy a new one"? I'm hoping that someone here will be able to look at the pictures and say that typically it is this or that component that fails and tell me how to check it 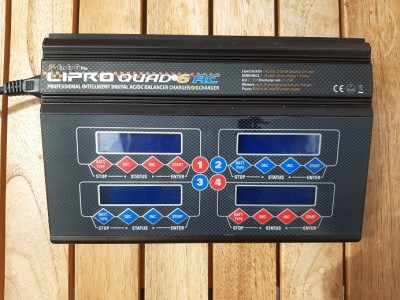 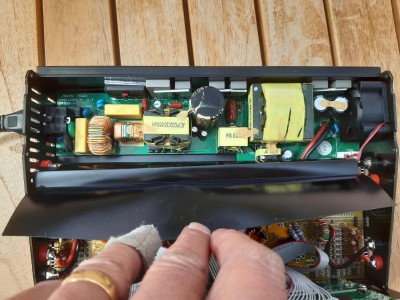 If there's no fuse, the first things I would check would be the electrolytic capacitors. One is the big cylindrical thing in the centre of the image, and there are two more that seem to be glued together on the right hand side. I would try the big central one first.

That looks like a "switch-mode" power supply, and these rely heavily on large value capacitors to work. They also put a lot of strain on them!

If all else fails, and it still runs off 12V, consider getting a cheap "server" power supply off ebay to power it. The server supply will almost certainly deliver far more oomph than the internal one anyway!

Plenty of information on how to set them up on t'internet. Google is your friend!

Wow, that was quick! Thanks Pete, how do I check an electrolytic capacitor (or do I just replace it and hope) ?

Yes!...... The mains fuse was the first thing I checked

. And thanks but I do have a 12V power supply but I would still like to fix the charger if I can.

You can do a basic check on an electrolytic with a multimeter. Set the meter to the "ohms" range ( say X1K). You will need to remove the capacitor from the circuit board - or at least disconnect one end of it. Short the capacitor out briefly to remove any stored charge. Next connect the multimeter across the capacitor. It should initially show a short circuit, but then charge up until it shows an open circuit. (Initially shows zero ohms rising to infinite ohms.) How long it takes to charge will depend on the value of the capacitor and the ohms range you have selected on the meter. If it continually shows short circuit, try a lower ohms setting on the meter. If it continues to show short circuit, with no sign of the resistance increasing, you have probably found the issue!

Just because it passes this test doesn't mean it won't break down in circuit. However, if it doesn't pass this test, then you have probably found the fault!

If the capacitor is dead, it will need replacing with one of a similar value, but get one with a high "ripple current" rating intended for power supply use. Using cheap capacitors will lead to another failure in due course!

Also, bear in mind that it is quite possible that a capacitor failure may have caused further damage elsewhere. Most switch-mode power supplies are designed to be "failure tolerant", but there are no guarantees. Model chargers are built down to a price, not up to a specification!

Also, its possible that the fault lies somewhere else completely. But a good rule of thumb for fault finding is 1) Check the incoming power is present. If yes then 2) Check electrolytics, followed by 3) lots of head scratching and in-depth fault finding!

It looks suspiciously like you may have a fuse on the circuit board, the black rectangular component just to the right of the mains connector (see photo below) could be a resettable poly-fuse similar to what I've been using on some circuits recently. And even though they are meant to be resettable, they can fail open and not reset just by getting old. 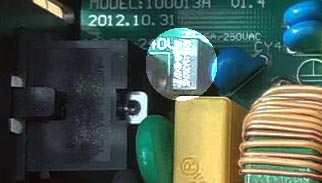 Maybe a close-up of that component would confirm if it is what I think it could be.

Should be easy to check if its open circuit or not with a multimeter...

Mike, many thanks and yes, the good news is that I think it is a resettable fuse ...... 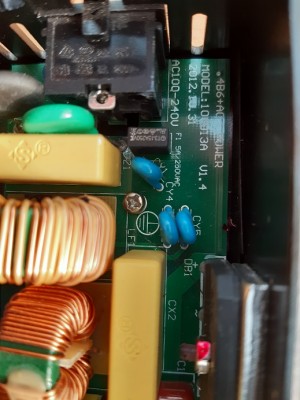 But the not so good news is that there is a dead short across it. I checked it in situ but I assume that means that this is not the problem.

So the next thing will be removing that big electrolytic capacitor......