Electronic or otherwise, we love our gadgets!
Post Reply
5 posts • Page 1 of 1

This is not a single-board computer like the other Raspberry Pis - rather it is a single chip microcontroller - similar to our Arduino boards.

It's much more powerful than an Arduino Nano or similar - it has 264KB of RAM, and an ARM M0 processor running at 133MHz. But you program it like an Arduino using C++ (or you can also use Python and other languages).

A possible downside for our use is that it that the pins operate at 3.3V, not 5V - though this is the norm nowadays.

Of course, there are lots of other similar boards around already, but the Pico is cheap, available via local suppliers, and if the Raspberry Pi itself is anything to go by, the Pico will become enormously popular, so there will be lots of support available and plenty of projects by others to look at and use.
Top

Has anybody looked at one of these and what do we think?

I'm very much a beginner with Arduino and C++ but have often wondered if micro python will eventually become the norm.

I have a feeeling they're a bit late for the party.
Might be good gear but support for Arduino is surely overwhelming compared to this.
Top

They arrived fast. One benefit of buying from the UK instead of China. 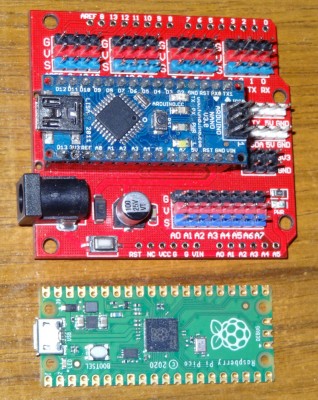 The I/O points are very clearly labelled, on the bottom of the board. I suppose we have to call the side with the BOOTSEL button and LED the top. It would be better (IMO) if they'd put the button and LED on the same side as the labels - but there are no components on the back, and I suppose a single-sided load makes the boards cheaper, and there's more room for clear labels on the component-free side. I guess I need to print out a chart of which pin is which, and hang it up near the project desk for quick reference.

modification of the Nano to make the 3.3V pin compatible with the 'Red' motherboard.
Top

Arduino are making their own version, using the same chip, but adding WiFi, Bluetooth, gyros, a microphone, and 16MB of Flash.

However, the raw chip seems lacking in many respects compared to a similarly priced ESP32 - no built-in WiFi or Bluetooth, no floating point, no hardware integer divide, only 32-bit hardware integer multiply. I expect the Raspberry name will mean that it's still a big seller. And the Raspberry Pi Foundation have a history of releasing improved performance versions of their products every year or so.

Edit: I was sort-of wrong about the hardware divide. It's not really part of the microprocessor's instruction set, but it has built-in peripherals that can do 32-bit integer divides in 8 cycles - one per core.
Top
Post Reply
5 posts • Page 1 of 1