Before Brushless motors it was still possible to achieve good results with careful selection of the model and power train. 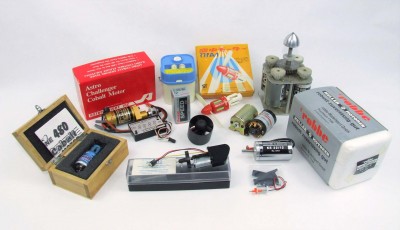 The quad geared Speed 600 unit used to fly a 1/4 scale Sopwith Pup. Built by Gordon Warbuton many years ago and featured in the modelling mags. A brilliant achievement at the time. 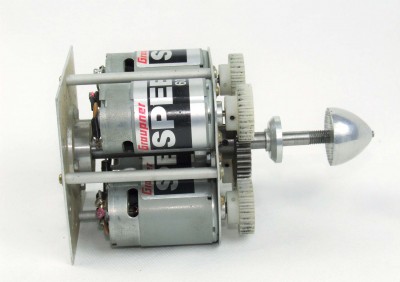 The Mabuchi system was essentially a plug and play e-power system. A number of planes were designed for it and you could swap the motor / power pod between them to save money. It wasn't cheap at the time. 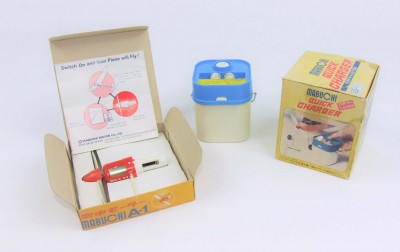 That's very interesting...can you tell us what battery/speed controller/ prop setup you're using with those? I've got loads of 'em
Gary
Top

I used Graupner grey 6x4 on mine also the higher pitched 5inch Gunther props. The black carbon / nylon ones were the best but not very robust. The white plastic ones performed well.

I bought this beasty many years ago, intending to convert my Lanzo Record Breaker (96-inch span) to electric. Pound coin for size comparison. 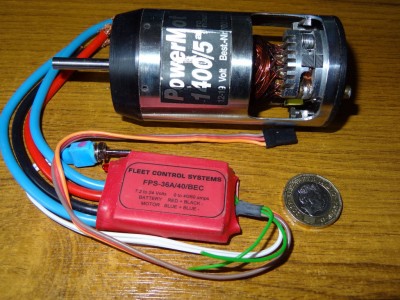 I never used it and I just got it out to photograph it. Despite sitting in a centrally heated room in a clean dry box for all those years, it seems like it's deteriorated

Some of the magnets seem to have "rotted" and turned into something resembling iron filings. The motor is now very stiff to turn as these 'filings' are stuck between the rotor and the other magnets. I probably would never have used it as an equivalent power brushless motor wouldn't cost much now - but now I know it's deteriorated I'm like a dog with a bone and I feel the need to strip it down, clean it, and get it working as well as possible.

I shall resist the temptation, however.
Top

Unfortunately some early magnets were wrongly chromated and with time the chrome cracked and that's the result. Be aware that those "filings" could be extremely poisonous in particular the Neo
Top

That's very interesting...can you tell us what battery/speed controller/ prop setup you're using with those? I've got loads of 'em
Gary

I run Graupner or CAM folding 6 x 3 props that were available here in the US in many years ago from a now defunct outfit called Hobby Lobby (not to be confused with the chain of craft stores by the same name) on my 6v direct drive speed 400 motors. I have run all types of battery chemistry. I still have some 7 cell 1600 mah Nimh packs that weigh about the same as the original 500/600 mah Nicad packs because they are just right in terms of ballast and noseweight for my Skimmer 400 electric glider. The speed controllers I have are Castle Creations, Great Planes, and some new ones from Turnigy.

Incidentally, Speed 400 LMR is still flown at a few US SAM events, though I suspect by only a handful of folks. They like APC props as well as GWS. I also have a couple of really nifty aluminum mounts that were custom machined by a fellow named Kramer and have the same mounting bolt pattern as a Cox reed valve engine, allowing one to use the same model in 1/2a Texaco glow as well as Soeed 400 LMR.

While I'm an IC engine man at heart, I really enjoyed my early experiences with electric power in the pre-lipo, pre-brushless era. The little speed 400 motors connect me to that bygone era, and, incidentally, I much prefer the way they sound up close compared to a brushless. 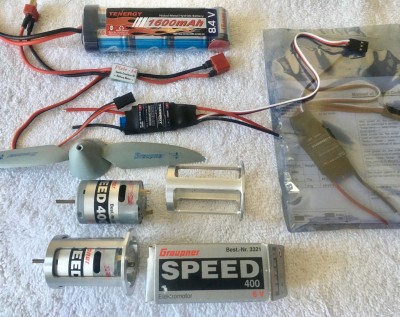 At the other end of the brushed spectrum are these bigguns - this one powered by a Geist 150 (1,500 watt) brushed motor with 3 flux rings, running direct drive off a 30 cell pack of 1200mah Sanyo's through STW (Hans Sommeraur) custom made 110 Amp controllers. AUW 4.6kg. The Volture 150 was my own design - it was a quantum leap over what we had been flying up until 1985, and a wonderful aeroplane to fly

. The radio was a Multiplex Royal MC using a custom ROM procured through Jan David, the German TM. That radio is still used, being one of my favourite radios which I converted to 2.4GHz some years ago.

In 1986 I competed in the inaugural Electric Flight World Championships, held in Lommel, Belgium. I still have both my A & B models, but they are buried in storage 3hrs drive away so I can't take any pics of the motor or controller at the moment. We are moving again in a month, so hopefully I can post some pictures after that. I last flew this aeroplane about 8 years ago. 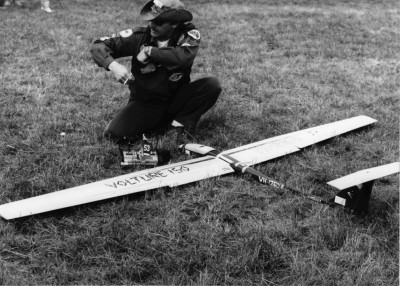 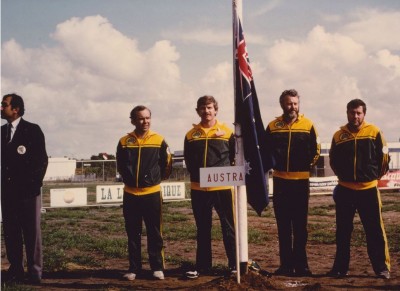 The Aussie Team - left to right - John Adams, me, Peter Pine & Peter Cranfield (TM). On the very left is the 1st World Champion, Rudi Freudenthaler from Austria (must have been the suit!?!)

It was at these World Champs that I met David Boddington - we had a great chat for about 20 minutes, which left me with the lasting impression of DB as a genuine & nice bloke!

I also saw, examined and photographed the prototype Hectoplett 2,000 watt brushed motor. It was beautifully engineered and finished, unlike the Geist 150 which was "utilitarian" in comparison!?! Again, these prints & negs (no digital way back then I'm afraid

) are also in storage. Will post when I find them

I unearthed several of my larger brushed motors while moving items out of storage last weekend. 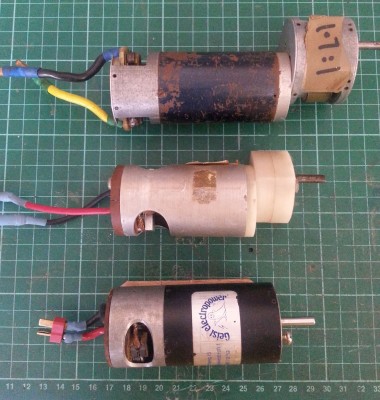 those are 1cm squares in the background 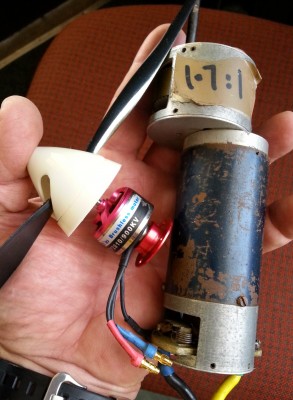 Next is the Geist 40-14 (400w & 14 cells) with 2.8:1 gearbox. This was the motor to beat in our Aussie e-thermal glider competitions in the mid-80's. There was a matching Geist 16" fibreglass folding prop that resembled a rubber prop, which complimented the motor & gearbox perfectly. 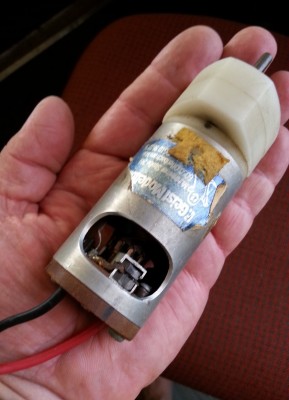 The remaining motor is a Geist 10 cell. Meant for direct drive on 10 cells, it performed best when propped for about 700w. 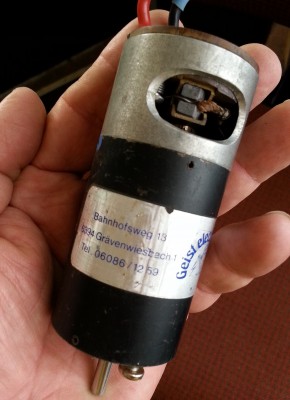 All of these motors could be (& often were) fitted with steel flux rings to better contain the magnetic field from the samarium-cobalt magnets. The challenge was to balance increased current draw against weight, available speed controller technology & overall model performance. 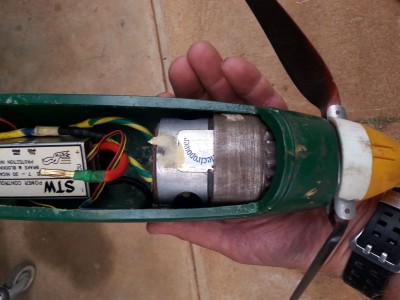 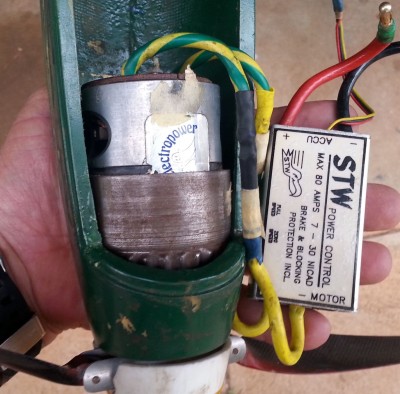 These last pics are of my Geist 150 (1500w) direct drive motor & STW speed controller as fitted in my "A" model at the 1986 World Championships. It has 2 of the commercial spring steel flux rings as well as a second larger home made flux ring, 4mm thick

Creepy, this page came up as I was browsing through the forum - particularly Shaun's collection - and the fact that Shaun mailed me today on another matter.
This very morning, I was raking through the cobwebs looking for my Astro Challenger 05 geared motor with a view to building another Astro Challenger glider (actually, a number of folks have asked me to do the ribs, so double joy, I get paid for doing what I want

)) ! I also have the Robbe/Keller motor too, it was in the same dusty box - that was latterly fitted to a Chris Foss Uno Wot in 19canteen - the original 0.25 trainer - flew really well on 8 cells.
I even remember buying the Astro motor in San Jose (Sheldon's - wonder if it's still there - first time I ever saw a shopping trolley in a hobby shop

in the US when I was working there for a while - cost an arm and a leg IIRC - it's been in countless models - both geared and non-geared. I bought a modern brushed speed controller from HK recently for the purpose of fitting to a new Challenger.

BTW Shaun, is that mabuchi setup the same as was in the Electra foamy F/F model of the 60's ? It had salt water batteries - could never afford it then either