Quartslab were always a favourite with hams, they make radio crystals to any spec you like.
We all used them a lot for converting police and taxi radios to ham bands, but they seemed to disappear for a long time. Well they are trading and for anyone wanting non-standard crystals its a very realistic option.
Say you have an early Macgregor superhet with the 470k IF. Suitable transmitter crystals are ten a penny but receiver crystals for a 470k IF are rocking horse poop. Quartslab will cut you a brand new one for £12. Actually theres a minimum order of two but thats ok, they dont have to be the same crystal.
Given the price some vendors are asking for standard crystals, I think £12 for an otherwise unobtainable custom made one is great value.
Use the bottom half of their form, specify the exact crystal frequency (eg transmitter frequency minus .47mhz for Macgregor), the holder as HC25/U or HC50/U, series resonant, 3rd overtone: 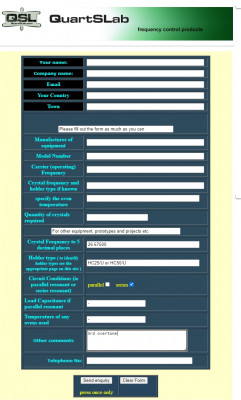 Brill Phil, Thanks for that mate. safe journey back from the swappy. I Hope to see you all again soon. (wiggles)
)