Looks fun, for an hour or so! So long as someone else id buying the fuel!

Nothing wrong with mobos, it can be great fun beating hell out of a few waves...... as long as your wake doesn't upset my sails!

"Oh, you are awful. But I do like you." Or have I got the wrong sort of sailors?? (remember Dick Emery?)
Never owned my own boat but have sailed quite a lot on other peoples when I lived in Ipswich. Had a friend who moored his yacht at the Orwell yacht club. Like you Paul we did a lot of sailing around the Orwell, Blackwater, Deben and the local coast. Did various sailing holidays around Canary islands, Greece and Turkey. Also did a yacht delivery(small fleet) with 'Sunsail' from South of France to Greece which went horribly wrong, not for me but others. A Westerly force 8 to 9 storm blew up just after we entered port on the South of Corsica. Unfortunately a 35 footer was still out with 4 on board. They had been relying on the compass and log for navigation. As the yachts were new the log had not been calibrated neither had the compass been swung. The result was, in the dark, they sailed past the gap between Corsica and Sardinia and part way down the West coast of Sardinia. They realised their error eventually but ran out of fuel for the engine entering the gap. This resulted in the yacht being driven onto some very nasty rocks(a total loss, no sign when we eventually sailed past days later) and one of the crew dying from a main boom strike to the head. Never got to Greece as I had to get back to work so left the fleet in Sicily at Messina. Had another interesting trip on a Westerly 33 footer to the Scilly Isles and back from Salcombe which I'll relate another time. All in all, good times.
Top

Frustrated sailor. One day I hope to own a small boat.
I've read 'The Kon Tiki Expedition' by (Thor Heyerdahl), 'Sailing Just For Fun' (Charles Stock), 'Three ways to capsize a boat' (Chris Stewart), 'The Bounty' (Caroline Alexander), 'Phoenix from the ashes' (Justin Ruthven-Tyers) and they are all excellent, and make me want to go sailing ASAP. Unfortunately family demands and a full time job say no.
I do occasionally browse the small ads for stray and orphaned Mirror dinghies, but I don't have a tow bar or a trailer either!

You can car top a Mirror dinghy or a sailing canoe. Been there done that....err still doing that!

If you need more books to read, try "The Art of Coarse sailing" by Michael Geeene. His version of the Beaufort Scale is a gem. Any sailor who has not read it is a bit like flyers who say they have never read Jonathan Livingsone Seagull. Attached version further modified for SlopeSoarers

This morning , the tide was right, the wind was right and the Sun was shining....... Sometimes you just have to go and mess about in boats! 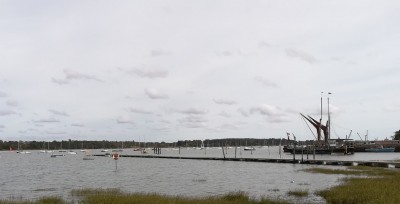 Pin Mill? Would be my guess.
Top

I imagine that was some time ago and pre gps? Fortunately GPS and huge advances in weather forecasting have made sailing much safer these days and such incidents relatively rare.