Any stories, collections or recollections of the earliest days of computers
or related projects
Post Reply
6 posts • Page 1 of 1

For anyone hankering after an old 80's style BASIC computer without the reliability issues and with reliable long-term storage.... no chewed-up cassette tapes or disk compatibility problems...

Martin tipped me off about this project by a very clever chap called Geoff Graham in Oz. He does a range of boards, Martin has tried several, but the one I bought was the "Colour Maximite" kit. Its really simple, just a PIC32 chip and a few passives. Everything including colour VGA video is done in software. All you need is a VGA monitor, a PS2 keyboard and an SD card.

It doesnt have an accessible operating system as such, it runs native MMBASIC which is a very capable extension of GWBASIC, MBASIC, etc. Storage is to SD card rather than horrible tapes, and the PIC chip gives it plenty of program memory, typically 85k, depending on the mode you choose. Other than that, and the speed this thing runs at, you'd be convinced that you're sat at a Tandy TRS80 keyboard.

As the boards are all compatible, anything you develop can be programmed into a smaller, dedicated board to make a simple embedded system. It has a battery-backed real-time clock and analogue inputs so for example a logging battery charge/discharge project would be easy peasy.

The "Colour Maximite" kit is absolutely complete and £60 well spent if you long for a bit of retro tinkering. The surface-mount PIC chip is pre-soldered and the rest isnt at all taxing but if thats too expensive you can also assemble your own using a readily available PIC32 board from ebay. If anyone fancies joining the 80s computer club, but dont fancy DIY, Martin found a UK supplier who will optionally assemble the kit for a further £20

The Maximite also has a bagillion free I/O pins so you can add bits & bobs to your hearts content.
It also has an internal Arduino shield header so you can use Arduino accessories. There are loads of Youtube videos showing Maximites driving stepper motors, switching house lights, etc

Heres the maximite driving a servo (not very well, but still..)

This was just a very quick go at getting the Maximite to drive a servo between two extremes.
Its spaghetti so ignore the quick-bodge code

Timer resolution is only 1ms so need to think of a better way.
But with the Maximite's inbuilt real-time clock, you could write an alarm clock where at 7am a servo pushes a can of mabs off the table...

PS
Finally won a complete game of Super Star-Trek! I dont remember ever managing this back in the day.... 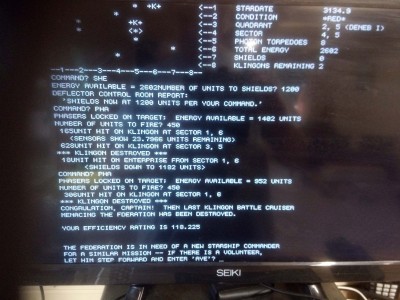 The spelling errors are in the original code - I left them there for posterity but I'm feeling the urge to correct them...
Top

Time to write a sequel?
Top

I built my first one on the cheap by using one of the MX795 UBW32 boards you can buy on Ebay. These are like a giant Arduino Nano, but have the PIC32 chip rather than the Atmel Mega. It's a bit fiddly go go that route though as you have to wire your own VGA, and keyboard PS2 connectors to the board, plus wire up an SD card interface. The pins for those are spread all around the edges of the UBW32 so you end up with something of a rat's nest. You can find all the circuit diagrams, software, and instructions on Geoff's website.

Then I built one from a kit like Phil did. Much neater.

I've also got some of the smaller MiniMite chips. These don't support a VGA monitor, but you can connect an LCD display instead. I'm waiting for a cheap Ebay display module to arrive from China to see what I can cook up for those.

MMBasic runs at amazing speed - roughly half the speed you get from a compiled program running on an Arduino! For anyone who already knows BASIC and fancies a retro experience without the pain of tapes or floppy drives, and with modern reliable hardware, the Colour Maximite is highly recommended.

If you know BASIC but find the C++ used by Arduinos to be a bit complicated, then you should also look at a Colour MaxiMite or a MiniMite. It's like programming a Commodore 64 or TRS80 or similar but runs hundreds of times faster. It has built-in support for interfaces like I2C and SPI, plus loads of analogue and digital pins you can program to do whatever you want.
Top

Here's a game I wrote last month for the Maximite. All the code is in BASIC (as far as I know there's no way of jumping to machine code with the Maximite). The one chip produces the video, sound, everything.

Now I'm working on a conversion of the classic Manic Miner game. I don't know yet if it will be possible to get the whole thing running in BASIC, but I've not hit any insurmountable problems so far.

I used to love manic minor, got hooked on it though.
Remember those tunes the tape machine used to play loading it in lol
Brilliant