I want to introduce you to a new generation Galloping Ghost actuators...might not be suitable for the purist as the interference between Rudder and Elevator is not necessarily there anymore but on the other side the pulse rate can be set via an auxiliary channel on the transmitter if the default is not up to your expectation.
Something in this direction have been on my bucket list for long time and with the last storms I got time to spare and ...There has been a loot of thinking with try and error but slowly I'm getting there
What you see in the pictures are "Single Action" actuators in 3 different configurations, single unit and in a Brick unit with the options of side by side or tandem together with my 2 original ones, standard and with reversed elevator as elevator shouldn't be reversed from the transmitter. Missing in the picture is the Adams Clone
With a combination of actuators now it's possible to fly full house GG something that wasn't possible in the old day.
The single action actuator follows in the steps of the old Bellamatic.

Any ideas yet re pricing??
Cheers,

I haven't done my homework about the costs & pricing yet but would imagine for the PnP "single" at $ 50 included S & H and the PnP The Brick either side by side or tandem at $ 75 included S&H.
If wanted bare/no recoder there would be a reduction of $ 15 for the single and $ 30 for the The Brick.

I'm not ready to take orders yet as they are under testing.

To be noticed that this actuator have built in stops so it can't / wouldn't cycle and will give you the same amount of throw on all channels with no interference between them.

You should probably compare to some of the early high rate pulsing equipment quasi digital/proportional.

The recoders are also of a new generation and a work in progress as the software is under review.

I hope in the next month to have everything finalized and have them ready to be enjoyed.

FYI one set is now flying in a Fidget, Full House i.e. ailerons, elevator, rudder and it's a ball and I can assure it has turned many heads.

Keep in touch for more info to come.

As I have been working on the new actuator it came up to me in how the "Recoder" has evolved too.
In the following picture you will see this evolution and shows the direction of an ongoing project,to create a Do It Yourself actuator with a suitable Recoder that is simple enough to print, build and program thus the choice of base i.e. Arduino Pro Mini or Nano and an option for the most experienced ones an alternative with a DigiSpark ATtiny85 .
The first one is what we used before the PnP actuator were created and was Pic based and the second in line of Recoders is what we are using today in the PnP and is based on a ATtiny85. The following one shows the progress of the DIY Recoder to where we are today i.e. 2 Arduino based and 2 DigiSpark ATtiny85 based.
The new line of Recoders is such that they work for one channel as two channel actuators due of the recoders capacity to detect if elevator is connected or not and if not it will go in a default mode running only the rudder, here it's important to point out that no connector should be removed from the receiver under the time the system is on and in use.
Stay tuned as more is to come in this DIY project. 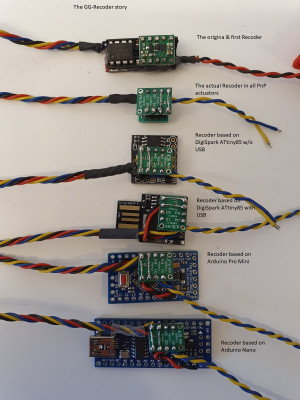 Ron
If you would like to contribute a small amount toward the upkeep of this valuable forum then please click the Donations link at the top of the page, just below the mode zero logo. All donations are kept anonymous. Thankyou
Top

The side-by-side one resembles the original RAND 'Dual Pak' from the mid-Seventies.

I have a rather extensive collection of Model Airplane News magazines in hardback bindings, including the October, 1967 article "Field and Bench". There, a Top Flite 'Top Dawg' kit is reviewed, along with an Enya .09TV, using a Controlaire GG transmitter with the matching SH-100 receiver. That receiver had the relay removed for running a RAND Dual Pak (mis-spelled as "Dual Tak") GG actuator. Relay was removed as the RAND had a built-in switcher for more reliability. I've flown GG systems with the same Controlaire, and it had this habit of working for about 2 1/2 flights, using the LR-3 actuator and a relay. The Dual Pak retailed for $75 including a 1AH NiCd battery (same issue has an advert on page 58), so Tobe asking the same (less battery) for the actuator along with S&H would be very reasonable, indeed.

That's better than the Min-X Pulsemite 1200S given to be by a co-worker, as it never worked at all, even for him, the original buyer. I sent it to a tech many years ago who promised he could fix it, but it worked erratically for only a short time. I will be replacing the innards with one of Phil's modern boards (soon, I promise).